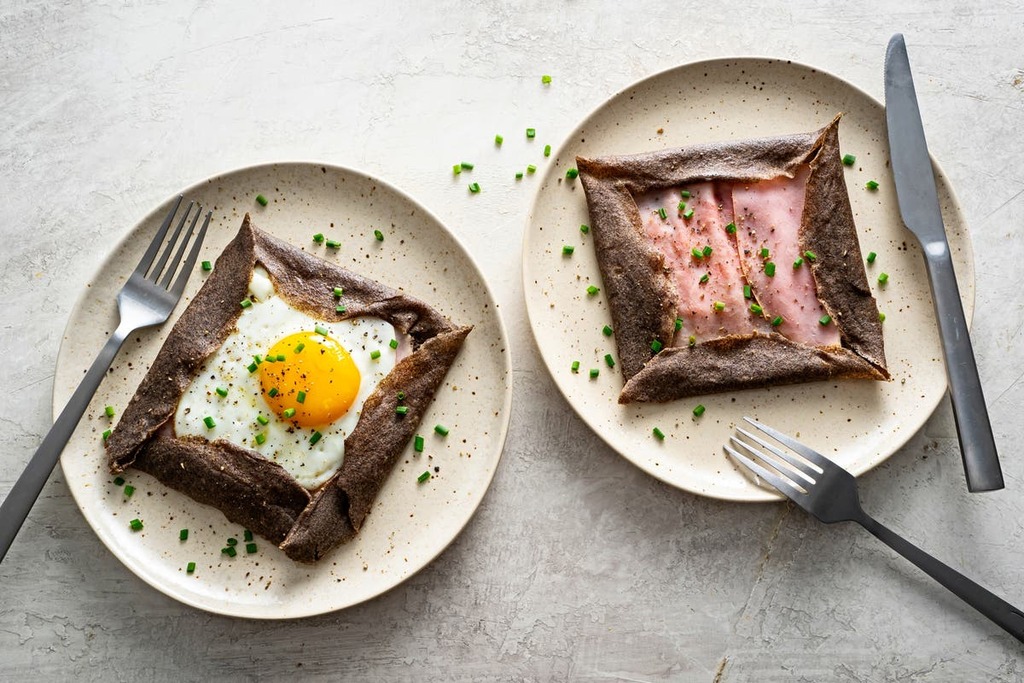 Brittany, in northwestern France, has long been one of my favourite places in the world. Its rough landscape reminds me of where I grew up in Massachusetts. The rocky beaches, sullen, grey skies, and at times punishing winds are not the paradise many picture when they think of coastal towns, but there's romance in the harshness of climate and landscape. Maybe that's why visiting Brittany feels like home.

The climate is ideal for growing buckwheat, a crop I'm intimately familiar with given my Russian roots. Russians eat a lot of buckwheat, drowning groats with milk in the morning, serving it as a savoury side for dinner, grinding it into flour for blini. Eastern European Jews mix buckwheat with bow-tie pasta and caramelised onions in kasha varnishkes. And in Brittany, where buckwheat, also known as blé noir, flourishes as well, it is used in savoury crepes, called galettes. (In France, crepes are considered a sweet treat and are generally made with a batter containing white flour, eggs and milk).

These galettes are then filled with various ingredients, including a combination of grated cheese (usually Emmental or Gruyère, if you're fancy), thin slices of ham often torn into strips, and an egg with a soft yolk. This is a galette complète. In Brittany, many places serve galettes throughout the day, often with a simple green salad and pitchers of locally made cold, hard cider. It's heaven on earth.

Unfilled buckwheat galettes can be made ahead, wrapped tightly and refrigerated for a few days until you need a quick meal. A working lunch at my house with a colleague allotted just enough time to grate the cheese, warm a few unfilled galettes and crisp them up with the fillings.

A friend's dad, Patrick Lemoine, who grew up in Brittany watching his grandmother turn out galettes in her crepe stand in Rennes, kindly coached me through the process once I started testing batches for this story. Among his advice: It's critical to beat the batter for five to 10 minutes to aerate it, and to use it within the first hour or so, or to refrigerate for up to 12. Otherwise, it might develop a sour bitterness.

The pan should be heated to the point where a drop of water “dances on its surface,” he said, adding that buckwheat flours differ in colour and texture - and some brands don't work as well in galette-making. That is why I recommend Arrowhead Mills for this recipe.

Traditionally, buckwheat galettes are made with just buckwheat flour, water and salt, but he noted that some families do add a bit of white flour, egg and/or milk to make the batter more elastic, so if your batter is uncooperative, it's OK to make adjustments that work for you.

Too often we deem all things French fancy and difficult to master, so remember that a buckwheat galette is just a thin pancake. Don't fuss over its perfection. Making lacy, translucent galettes will take practice, but, as you experiment, it is OK if they are slightly thicker.

Galettes are forgiving. If as you swirl the batter in the pan, holes appear in the surface of your galette, fill them in with a touch more batter here and there.

This recipe is for the traditional galettes complètes, but use whatever fillings you like. I prefer cheese on the bottom, ham on top and no egg, resulting in a crisp, delicate galette, enjoyed with sparkling cider or a glass of bubbly, if I'm feeling festive.

These savoury crepes, called galettes in France, are made with naturally gluten-free buckwheat flour and hail from the Brittany region in France. Galettes can be filled with myriad fillings, including cheese, ham and egg, known as galettes complètes. We like them without the egg on top, too. The batter should be a little thinner than the consistency of heavy cream. Do not skip beating the batter for a full 5 to 10 minutes to aerate it: You will be rewarded with lacy, thin crepes. The galettes can be made in a nonstick skillet, but a steel crepe pan is a better conductor of heat and easier to maneuver.

Make Ahead: The batter needs to be prepared at least 30 minutes in advance of cooking.

Storage Notes: Unfilled galettes can be tightly wrapped and refrigerated for up to 3 days.

560ml water, plus more as needed

85g salted or unsalted butter, for crisping up the galettes, divided

1. Make the galettes: In a large bowl, stir together the buckwheat flour and salt. Slowly pour in the water and beat the batter vigorously for 5 to 10 minutes. This will help to aerate the batter and make it lighter. Set aside for about 30 minutes, or cover and refrigerate for up to 12 hours.

2. About 30 minutes before you plan to make the crepes, remove the batter from the refrigerator.

3. When ready to cook, heat a 9- to 10-inch crepe pan or nonstick skillet (see headnote) over medium to medium-high heat until a drop of water dances on its surface before evaporating. Dip the corner of a wadded-up paper towel in the butter or oil and wipe it across the bottom and sides of the skillet to leave a whisper of fat on the surface. (Expect to use no more than 2 tablespoons/28 grams of butter or oil for cooking the unfilled galettes, but depending on how well seasoned your skillet is, you may not need to re-grease each time.)

4. Re-whisk the batter to recombine the ingredients. Its consistency should be slightly looser than heavy cream. Using a 60ml measure, ladle the batter over the far side of the skillet and tilt it to swirl the batter to the edges, creating a thin pancake. (Don't worry if your first galette is unsuccessful.)

6. Fill the galettes: In the same pan where you made the galettes, melt 1/2 tablespoon of butter over medium heat. Place one galette in the skillet with the side with larger bubbles facing up.

7. Scatter 35g of Gruyere in the centre of the galette and let it start to melt. When it's about three quarters melted, add a slice of ham and cook until just warm, about 1 minute. Top the ham with an egg, cover with any lid that is wider than the pan, and cook until the egg white is set but the yolk is still runny, or to your liking.

8. Using a spatula, fold about 1 inch of the four sides of the galette in, to form a square with the centre exposed. Slide the filled galette onto a plate, garnish with pepper and chives, if using. Repeat with the remaining galettes.

This analysis is an estimate based on available ingredients and this preparation. It should not substitute for a dietitian's or nutritionist's advice.