Youth should be aware of social realities and challenges: CJI 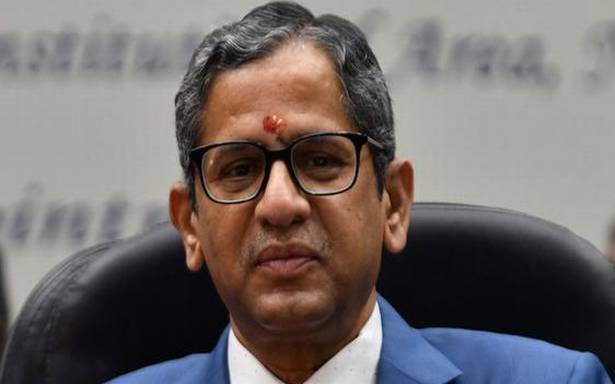 Chief Justice of India N.V. Ramana on Sunday said the unity and sacrifice of young people across faiths, beliefs and communities, who took to the streets to challenge authoritarian figures, gave the country democratic rights which were being taken for granted today.

“The democratic rights that we take today for granted are a result of the struggles of thousands of young people who took to the streets fighting authoritarian figures either during the Freedom Struggle or the dark days of Emergency. Many lost their lives, sacrificed lucrative careers, all for the greater good of the nation and society. Trust the youth to check the deviations in a society’s journey towards peace and progress,” Chief Justice Ramana said in his address on the 128th anniversary of the historic Chicago address of Swami Vivekananda.

The CJI, quoting Swami Vivekananda, said the youth did not tolerate injustice, either to themselves or against others. They did not compromise with their ideals, come what may. They were not only selfless but were also adventurous. They were willing to sacrifice for the cause they believed in. It is these unadulterated minds and pure hearts which formed the backbone of our nation.

The CJI said it was necessary for youth to be aware of social realities and challenges.

“Remember, any change in the nation’s trajectory always stems from its youth and their participation. It is for you to build the ideal nation and society that you desire to witness,” Chief Justice Ramana said.

The CJI’s words have significant import even as the past few years have seen young activists, academicians and journalists being jailed for sedition and students chased and beaten up by the police in university campus.

The Chief Justice reminisced how Swami Vivekananda, long before the churning brought about by the Independence struggle which led to the framing of an egalitarian Constitution, had prescribed secularism.

“He firmly believed that the true essence of religion was the common good, and tolerance. Religion should be above superstitions and rigidities. To fulfil the dream of making resurgent India through the principles of common good and tolerance, we should instil the ideals of Swami Ji in today’s youth,” Chief Justice Ramana pointed out to his young audience at the virtual event which also marked the 22nd Foundation Day of the Vivekananda Institute of Human Excellence in Hyderabad.