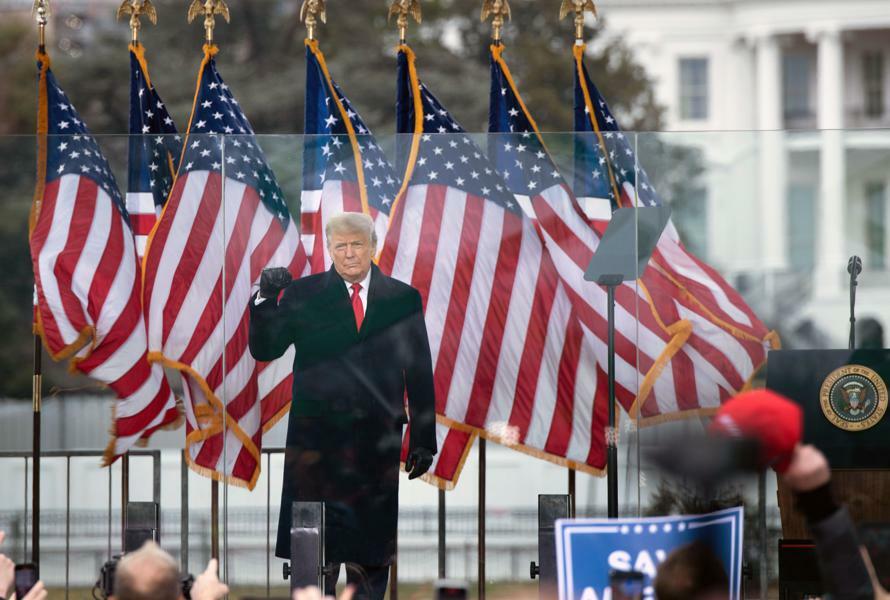 Former President Donald Trump repeatedly roped the U.S. Department of Justice into his failed attempt to overturn the presidential results, the Senate Judiciary Committee found, detailing in a new report released Thursday how Trump allegedly “grossly abused” his power by attempting to use the Justice Department for “personal, political purposes” after the election.

Trump “directly and repeatedly” asked senior DOJ staff on at least nine occasions to help overturn the election, including by telling them to open investigations, file lawsuits and “publicly declare the 2020 election ‘corrupt,’” according to the report, which is part of the committee’s investigation into Trump’s post-election efforts.

A Trump appointee at the DOJ, Jeffrey Bossert Clark, then tried to pressure Rosen and another official to send letters to states informing them of purported “election irregularities” and directing them to call special legislative sessions to consider appointing new slates of electors.

When Rosen refused to sign onto the plan, Clark threatened that Trump would replace Rosen with Clark as U.S. Attorney General unless the letters were signed, but that plan was thwarted when Rosen told Trump he and other officials would resign if the strategy was carried out.

When Rosen refused to sign onto the plan, Clark threatened that Trump would replace Rosen with Clark as U.S. Attorney General unless the letters were signed, but that plan was thwarted when Rosen and other officials told Trump they would resign if the strategy was carried out.

Trump “forced the resignation” of former U.S. Attorney Byung Jin (“BJay”) Pak in Georgia because he believed Pak “was not doing enough to address false claims of election fraud,” and went around the usual lines of succession to appoint a replacement who Trump thought would “do something” about the fraud allegations, the report said.

Trump allies including U.S. Rep. Scott Perry (R-Penn.), Pennsylvania State Sen. Doug Mastriano and Trump legal advisor Cleta Mitchell—who all were involved with the “Stop the Steal” rally on January 6—were part of the effort to pressure the DOJ and talked to officials there about the false election fraud claims.

The Judiciary Committee said Thursday it is waiting until the investigation is complete to make recommendations about any potential criminal referrals.

“Today’s report shows the American people just how close we came to a constitutional crisis,” Senate Judiciary Committee chair Sen. Dick Durbin (D-Ill.) said in a statement, noting while Trump was ultimately “unable to bend the [DOJ] to his will,” that “was not due to a lack of effort.” “Donald Trump would have shredded the Constitution to stay in power.”

Republicans on the Senate Judiciary Committee released their own report Thursday disputing the Democratic-led committee’s findings, which claims “the facts differed sharply from the narrative that the Democrats attempted to create.” “The documentary evidence and witness testimony currently available shows that throughout President Trump’s interactions with DOJ officials concerning election matters, he did not abuse his constitutional authority with respect to his conduct toward DOJ,” the Republicans wrote, claiming Trump merely “expressed concern with ensuring that DOJ was doing its job of fully investigating allegations of election fraud.”

The report recommends Congress and the Justice Department should take steps to strengthen their policies to ensure similar attempts to politicize the department can’t happen in the future. It also recommends the D.C. Bar should “scrutinize” Clark’s law license, which follows a separate ethics complaint filed against the ex-DOJ official with the Bar by attorneys who allege Clark violated professional rules of conduct with his attempt to overturn the election results. The Senate committee’s investigation is still ongoing and the committee said they’re still seeking additional witness testimony and Trump White House records.

The Justice Department was criticized throughout Trump’s presidency for how the president appeared to politicize it for his own personal gain, and former U.S. Attorney General William Barr drew scrutiny when he issued a directive right after the election giving officials permission to investigate election fraud before the results were certified. (Barr later went on to say there was no evidence of widespread election fraud before leaving his position and being replaced by Rosen in December 2020.) Trump’s pressure campaign on the DOJ was one part of a broader failed strategy to overturn the election results, which also included efforts like an unsuccessful legal campaign, pressuring state officials directly and attempting to get Vice President Mike Pence not to certify the election results after Congress approved them. None were successful, but the committee notes the president’s efforts “​​created the disinformation ecosystem necessary for Trump” to allegedly “incite” the violent attack on the U.S. Capitol building on January 6.

Subverting Justice: How the Former President and His Allies Pressured DOJ to Overturn the 2020 Election (Senate Judiciary Committee)

Jeffrey Clark Was Considered Unassuming. Then He Plotted With Trump. (New York Times)