The Supreme Court has ruled that a district attorney in Manhattan can seek Donald Trump‘s tax and financial records from his accounting firm, a potentially damaging ruling against the president and his New York-based business.

However, in a separate decision, the court blocked Congress from obtaining financial information from the president’s accounting firm and major lenders

The first ruling concerned not just the release of financial records, but the limits of presidential power. The Justice Department had argued that the president is immune from investigation while he holds office, and that a prosecutor must show a greater need than normal to obtain the records. The high court rejected those arguments.

“Two hundred years ago, a great jurist of our Court established that no citizen, not even the President, is categorically above the common duty to produce evidence when called upon in a criminal proceeding,” chief justice John Roberts wrote in his ruling.

The court ruled the president is not immune from the Manhattan district attorney’s subpoena, but sent the matter back to a lower court to resolve the dispute.

The ruling, while ostensibly handing a defeat to the president’s efforts to keep his financial records private, probably means that those records will not be made public before November’s presidential election.

The Manhattan district attorney had sought records from Mr Trump’s accounting firm concerning payments arranged by his former personal lawyer, Michael Cohen. The payments in question were allegedly made to keep two women from airing their claims of decade-old extramarital affairs with Mr Trump during the 2016 presidential race.

Mr Trump responded to the ruling by calling the investigation by the Manhattan district attorney “a political prosecution”.

“The Supreme Court sends case back to Lower Court, arguments to continue. This is all a political prosecution. I won the Mueller Witch Hunt, and others, and now I have to keep fighting in a politically corrupt New York. Not fair to this Presidency or Administration!” he wrote on Twitter. ”Courts in the past have given ‘broad deference’. BUT NOT ME!”

Cyrus Vance, the Manhattan district attorney, said in a written statement: “This is a tremendous victory for our nation’s system of justice and its founding principle that no one – not even a president – is above the law.

“Our investigation, which was delayed for almost a year by this lawsuit, will resume, guided as always by the grand jury’s solemn obligation to follow the law and the facts, wherever they may lead.” 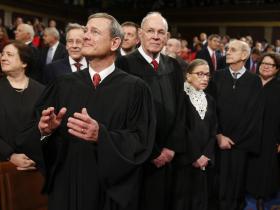 The US Supreme Court vs the First Amendment

By 7-2 votes, the justices upheld the Manhattan district attorney’s demand for Trump’s tax returns, with both of the president’s Supreme Court appointees – Neil Gorsuch and Brett Kavanaugh – voting with the majority.

House Speaker Nancy Pelosi said Democrats would not stop investigating Mr Trump and would press forward in seeking to enforce the subpoenas.

“Congress’s constitutional responsibility to uncover the truth continues, specifically related to the president’s Russia connection that he is hiding,” Ms Pelosi said, in reference to the contention that Mr Trump’s financial records could show such an entanglement.

The second ruling, that House Democrats cannot obtain Mr Trump’s tax records, financial information and more from his accounting firm, Mazars USA, and his major lenders, Deutsche Bank and Capital One, went in the president’s favour by a 7-2 margin.

The majority decision ruled that the House subpoenas were essentially limitless, meaning it could have set a precedent of allowing this and future Congresses endless access to any president’s personal records.

The high court long has held to a belief that each branch of government must retain the autonomy and powers given them by the Constitution.