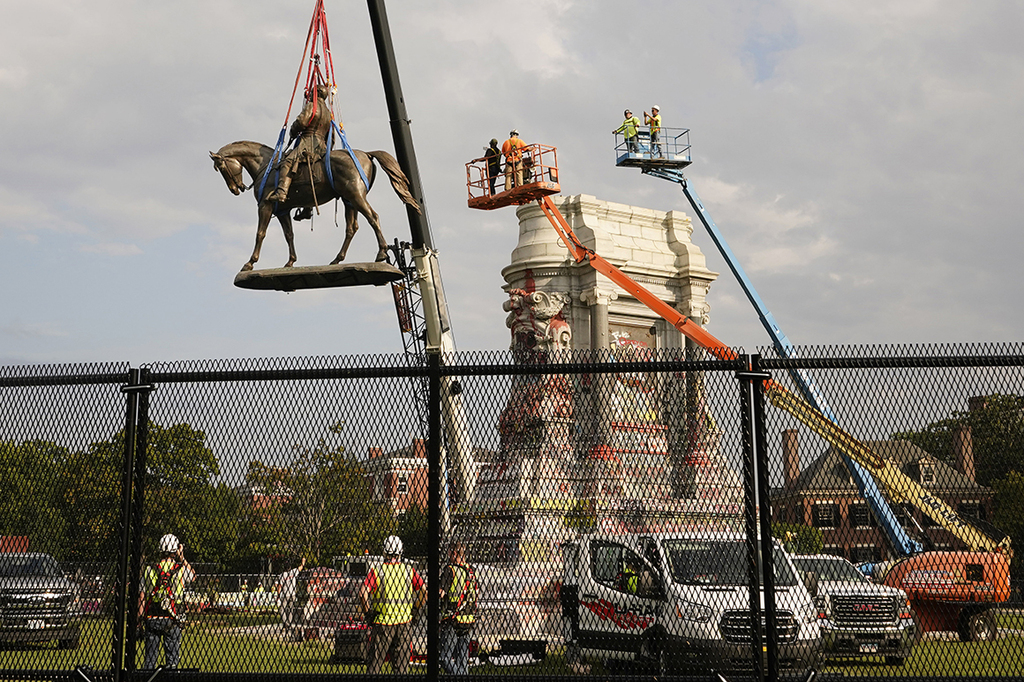 Former President Donald Trump on Wednesday decried Virginia’s removal of a towering statue of Confederate Gen. Robert E. Lee from the state capital, sending out a historically inaccurate statement not unlike other racially charged messages he has issued.

“Robert E. Lee is considered by many Generals to be the greatest strategist of them all,” Trump said in the statement. “President Lincoln wanted him to command the North, in which case the war would have been over in one day. Robert E. Lee instead chose the other side because of his great love of Virginia, and except for Gettysburg, would have won the war.”

“He should be remembered as perhaps the greatest unifying force after the war was over, ardent in his resolve to bring the North and South together through many means of reconciliation and imploring his soldiers to do their duty in becoming good citizens of this Country,” Trump added.

Lee was responsible for the deaths of hundreds of thousands of Americans as he led the fight to defend the South’s ability to own Black people as property. Lee has been lifted up as a heroic figure in the South, even today, an ideology that historians call the Lost Cause — a campaign designed to erase slavery as the cause of the Civil War, pushing the idea that the Confederate fight was a heroic one. In The Atlantic, Historian David Blight wrote that it provided a “foundation on which Southerners built the Jim Crow System.”

Trump is known to cultivate culture wars and stoke racism, and did just that in the first 2020 presidential debate with Joe Biden. He warned that under a Biden presidency, “our suburbs would be gone.” And when given the opportunity to condemn white supremacy, Trump instead told the far-right group the Proud Boys to “stand back and stand by.”

Proud Boys are among those charged in the deadly Jan. 6 riot at the Capitol. Trump has said those at the events of Jan. 6 were loving people who wanted to save the country.

In Wednesday’s statement, Trump said that if Lee were to have commanded U.S. troops in Afghanistan, the country would have seen victory years ago.

“What an embarrassment we are suffering because we don’t have the genius of a Robert. E. Lee!” Trump said.

The 21-foot-high bronze statue was lowered to the ground in Richmond on Wednesday morning, as a joyous crowd of hundreds cheered. A work crew cut the statue into pieces in order to haul it away to an undisclosed state-owned facility until a decision is made about where it will go next.

Gov. Ralph Northam of Virginia called for the statue’s removal last summer as the nation protested the police killing of George Floyd in Minneapolis. Wednesday’s move was a watershed moment for activists whose calls have been pushed aside for years.

Previous waves of advocacy in Virginia led to a rally of white supremacists in Charlottesville in 2017, leaving three dead and dozens injured. Trump responded at the time by saying that there were “very fine people, on both sides.”