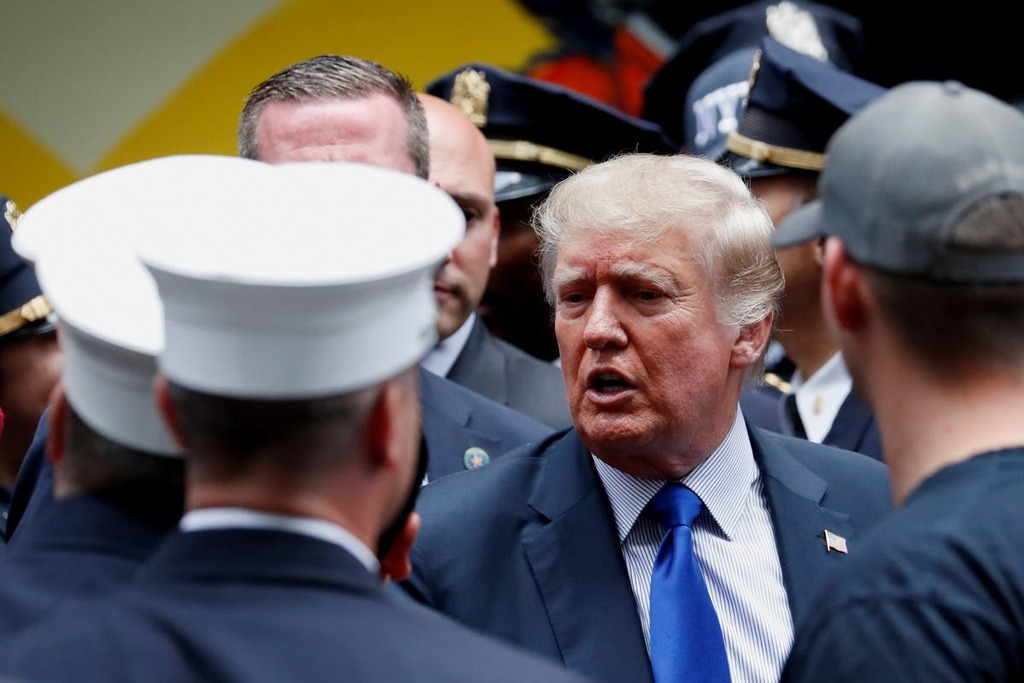 Former president Donald Trump appeared to signal his intentions to run for president in 2024 while talking to New York Police Department officers on the 20th anniversary of 9/11.

“Oh, that’s a tough question,” he said when asked by an officer if he would campaign for the White House again during a visit to the 17th precinct near Trump Tower in Manhattan on Saturday.

“Actually, it’s an easy question,” he said. “I know what I’m going to do, but we’re not supposed to be talking about it yet.”

He claimed that campaign finance laws prevented him from announcing whether he intends to run.

“But I think you’re going to be very happy,” he added.

Mr Trump, a native New Yorker, is not expected to attend any formal memorial services on Saturday as the nation mourns the thousands of lives lost during terror attacks 20 years ago.

President Joe Biden was joined by former presidents Barack Obama and Bill Clinton at the 9/11 memorial service in New York City, where the names of people killed in the attacks were read aloud on Saturday morning.

Lee Cochran, a spokeswoman for the 9/11 Memorial & Museum, confirmed to The New York Times that the former president was invited to the ceremony but did not attend.

Instead, Mr Trump released a video statement in which he thanked US service members and first responders and called the president a “fool” and “inept” over his handling of the US military drawdown in Afghanistan.

Mr Trump is also reportedly set to appear at an Evangelical Christian event in Washington DC and as a ringside commentator at a boxing event in Florida on Saturday night.

He is not expected to visit Ground Zero at all on Saturday, spokesperson Liz Harrington told The New York Times.

“He had the option to attend but decided to honor the day with different stops,” she said.

Mr Biden also travelled to Shanksville, Pennsylvania, and laid a wreath to recognise the victims of United Airlines Flight 93 who fought back against the flight’s hijackers and crashed the plane into a field in Somerset County.

Mr Biden also will attend a memorial service at the Pentagon.

During his visit to Midtown on Saturday, another NYPD officer asked Mr Trump if he would run to be New York City’s mayor if he doesn’t take another pass at the White House.

“We could straighten it up,” he said, laughing. “They’d announce in one week, ‘There’s no crime’ ... That would be such an easy job.”

During his brief visit, the former president revived his baseless narrative that the 2020 election was “rigged” against him and continued to criticise the current administration for its withdrawal from Afghanistan, adding: “I hate to talk about it on this day.”