Trump endorses Doug Mastriano in the Pa. governor's race, a late boost for the far-right front-runner

The endorsement could very well put him over the top and deal a crippling blow to 11th-hour efforts by some establishment Republicans to stop Mastriano, a far-right, staunch Trump ally who they fear will lose the general election in November.

"There is no one in Pennsylvania who has done more, or fought harder, for Election Integrity than State Senator Doug Mastriano," Trump said in a statement Saturday morning. "He is a fighter like few others, and has been with me right from the beginning, and now I have an obligation to be with him."

Mastriano, by contrast, has been leading by double-digits in recent polls of the nine-candidate race.

"I'm honored to receive the endorsement from President Trump today," Mastriano said in a statement. "But the honor is not for me. It's for the millions of hard-working Pennsylvanians who want their individual liberties restored, power returned to the people, and for their elected leaders to fulfill the America First — and Pennsylvania First — agenda."

The endorsement amounts to a safe bet at a time when other Trump-backed candidates — including Oz and David Perdue in Georgia's gubernatorial race — are at risk of losing. Trump's choice in Nebraska, Charles Herbster, lost in a gubernatorial primary this past week. Of course, plenty of Trump's picks have won — like author J.D. Vance in Ohio's GOP Senate race.

Trump made his pick in Pennsylvania's governor's race days after some establishment Republicans launched a last-minute effort to stop Mastriano, who they think will lose badly in November to state Attorney General Josh Shapiro, the presumptive Democratic nominee.

Mastriano was a leading figure in the effort to overturn President Joe Biden's 2020 victory in Pennsylvania.

He brought buses to Washington for the Jan. 6, 2021, "Stop the Steal" rally that led a pro-Trump mob to storm the Capitol, and has continued to spread baseless conspiracy theories about the election. He has said he left before things turned violent, and has been subpoenaed by the congressional committee investigating the attack.

"Trump just endorsed one of the most extreme and dangerous GOP candidates in the country for Governor of PA," Shapiro said Saturday on Twitter. "He wants to ban abortion and undermine elections. He attended the 1/6 insurrection and crossed police barricades."

Trump's statement Saturday reiterated his lies about a stolen election. It said Mastriano "has revealed the Deceit, Corruption, and outright Theft of the 2020 Presidential Election, and will do something about it."

"He will also Fight Violent Crime, Strengthen our Borders, Protect Life, Defend our under-siege Second Amendment, and Help our Military and our Vets," Trump said.

Barletta had benefited the most in recent days from GOP efforts to coalesce around a single alternative to Mastriano, as numerous current and former elected officials endorsed him. That included state Senate leader Jake Corman, who dropped out of the governor's race and asked his supporters to back Barletta instead.

But it wasn't enough to sway Trump.

"Throughout this campaign I have proved that I'm the best Republican to unite the Republican Party and defeat Josh Shapiro, and I will continue unifying our grassroots conservatives towards our shared goal," Barletta said in a statement Saturday after Trump's announcement. "I will continue making the case to the people that I am the only candidate who can unite the party and bring victory in November. I look forward to having President Trump's endorsement Wednesday morning."

Democrats have been trying to boost Mastriano's candidacy because they appear to see him as the weakest candidate against Shapiro.

Trump was said to like multiple candidates in the field, meeting with several over the course of the race. Each, to varying degrees, has amplified or flirted with Trump's false claims of voter fraud. And each of the top contenders has pledged to repeal the state's 2019 expansion of mail voting and proposed more stringent voter ID rules, among other policies.

Barletta was one of Trump's earliest supporters in his 2016 campaign, and the former president endorsed Barletta in his unsuccessful 2018 Senate race. Barletta, like other candidates in both the gubernatorial and Senate races, hired former Trump aides for his campaign, and he held a fund-raiser at Trump's Mar-a-Lago resort in Florida.

Some of Trump's most vocal allies have thrown their support behind Mastriano, citing his efforts to overturn the 2020 election.

White, a wealthy owner of an HVAC business who pitches himself as a "blue-collar businessman," met with Trump in late April. At the meeting, White's pollster — John McLaughlin, who has also worked for Trump — showed Trump an internal poll that had White in second place, trailing only Mastriano, according to people familiar with the meeting.

Corman tried to stay in the mix for a while, too. While he trailed in the polls, Corman appears to have struck up a rapport with Trump over golf. And the senator posted pictures of himself with his daughter at Mar-a-Lago this month, where they attended a screening of an election conspiracy film called 2000 Mules. "It's a movie every American should see," Corman said on Twitter.

But it was McSwain, a former Trump-appointed U.S. attorney in Philadelphia, who fared the worst in the Trump sweepstakes. The former president condemned McSwain for not prosecuting voter fraud in 2020. "Do not vote for Bill McSwain," Trump said last month, calling him "a coward, who let our Country down." 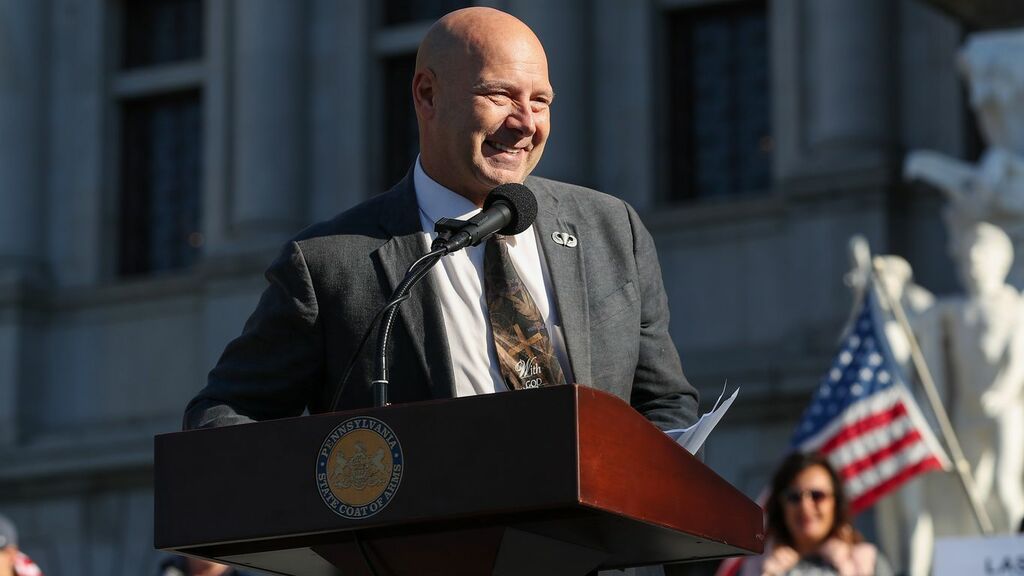 Trump leans toward endorsing highly controversial Doug Mastriano for Pa. governor
According to three sources familiar with his private deliberations.