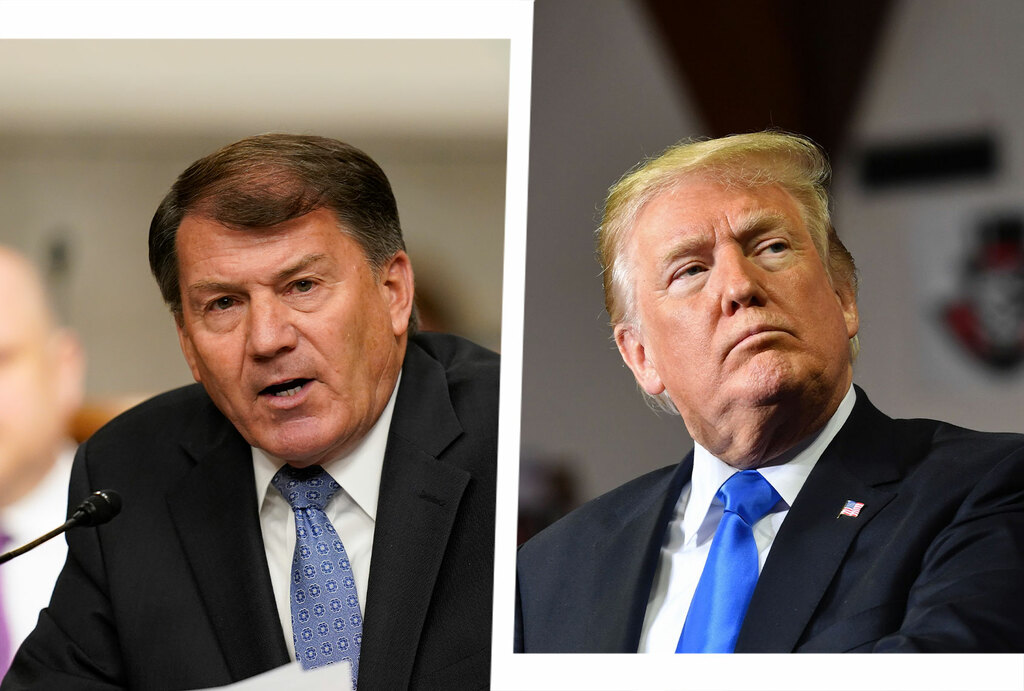 Former President Donald Trump lashed out at Sen. Mike Rounds, R-S.D., on Monday for acknowledging that the 2020 election was "fair," calling him "woke" and a "jerk."

Rounds "just went woke," Trump raged in a lengthy statement, repeating his lies about "massive evidence" of voter fraud that have repeatedly been debunked by election officials, courts and even top officials in his own administration. "Is he crazy or just stupid?" the former president questioned.

Rounds on Sunday rejected his party's narrative that there were any widespread irregularities or fraud that contributed to Trump's election loss in an interview with ABC News. The South Dakota Republican said the party had looked at "over 60 different accusations made in multiple states" but found no irregularities that "would have risen to the point where they would have changed the vote outcome in a single state."

"The election was fair, as fair as we have seen. We simply did not win the election, as Republicans, for the presidency," Rounds said, urging his party to "refocus once again on what it's going to take to win the presidency."

RELATED: The evolution of Trump's Big Lie: Republicans retool their conspiracy theory for the mainstream

Rounds said Trump's election lies threaten to hurt Republican candidates in upcoming elections after many party insiders faulted the former president for costing the GOP both its Senate seats in Georgia runoff elections just ahead of the Jan. 6 Capitol riot.

"If we simply look back and tell our people, 'Don't vote because there's cheating going on,' then we're going to put ourselves in a huge disadvantage," Rounds said. "So, moving forward, let's focus on what it takes to win those elections. We can do that. But we have to let people know that they can believe and they can have confidence that those elections are fair. And that is in every single state that we looked at."

Trump after the interview called Rounds a "RINO," or "Republican in name only," claiming that the senator had only won his re-election last year because of his endorsement.

"Even though his election will not be coming up for 5 years, I will never endorse this jerk again," he declared.

Rounds, 67, won his re-election race by more than 30 points in the deep-red state after previously serving as the state's governor for two terms. Rounds voted to certify President Biden's election win on Jan. 6 and condemned the pro-Trump riot, but later voted to acquit Trump after he was impeached for inciting the attack.

Rounds fired back at Trump's statement on Monday, reiterating that his false claims do not change the reality that he lost.

"I'm disappointed but not surprised by the former president's reaction. However, the facts remain the same. The former president lost the 2020 election," Rounds said in a statement, adding that nearly all of his Republican colleagues "acknowledged this last January" when they voted to certify the election results.

Other Republicans who have drawn Trump's ire for standing up to his repeated false claims commiserated with Rounds.

"Welcome to the club," said Sen. John Thune, R-S.D., the No. 2 Republican in the Senate, whose career Trump once declared "over."

"Mike Rounds speaks truth knowing that our Republic depends upon it," he tweeted, listing an unfortunately short list of prominent Republicans who have acknowledged Trump's election loss and the more than 60 courts that rejected his supporters' baseless claims.

"Awe I'm sorry snowflake," Rep. Adam Kinzinger, R-Ill., who serves on the House committee investigating the Jan. 6 attack, tweeted in response to Trump's statement. "Let's get you some milk and a blankie:(. Remember, you're special and everybody knows it!"

But Rounds' supporters decidedly seem to be a minority within their own party. A Yahoo News/YouGov poll last week found that 75% of Trump voters believe Trump's false claim that the election was "rigged and stolen." Only 9% believe that Biden won a "fair" election.

Read more on the persistence of the Big Lie: