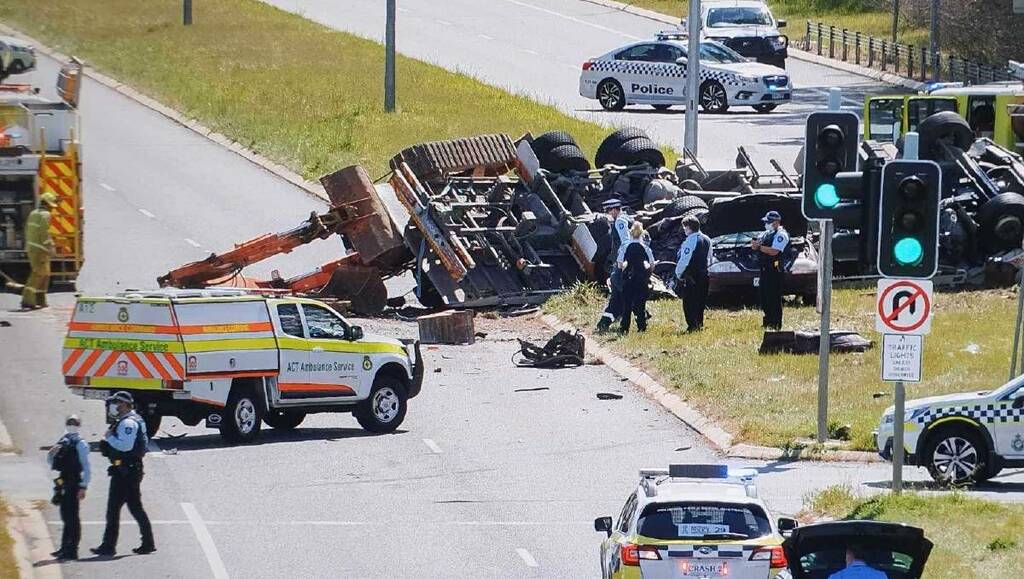 The truck driver accused of causing a fatal crash on the Barton Highway in September is set to fight his charges with his lawyer entering not guilty pleas on his behalf.

In an October statement, ACT Policing said a 45-year-old man died at the scene involving a three-vehicle crash on the highway at the intersection of the northbound exit from Gungahlin Drive.

Another man sustained serious injuries and was taken to Canberra Hospital following the incident on September 15.

Police allege the defendant, of Karabar, drove a tow truck that was carrying a 10-tonne excavator against a red traffic signal before colliding with a Ford Falcon sedan that the 45-year-old man was driving.

"The tow truck and Ford Falcon sedan travelled for close to 50m before coming to a stop," police said.

The other vehicle, a Toyota Land Cruiser, was propelled 60m before coming to a stop.

On Friday in the ACT Magistrates Court, Mr Barrett's lawyer entered the not guilty pleas.

The court heard that the prosecutions' brief of evidence was yet to be served.

Prosecutor Sofia Janackovic said the majority of the brief has been done but outstanding material included police officers' statements and an expert report.

The matter has been adjourned to January 14 to allow the finalisation of the brief of evidence.

"Any death on our roads is a tragedy. This death was completely avoidable and has left family and friends of the deceased grieving," she said.