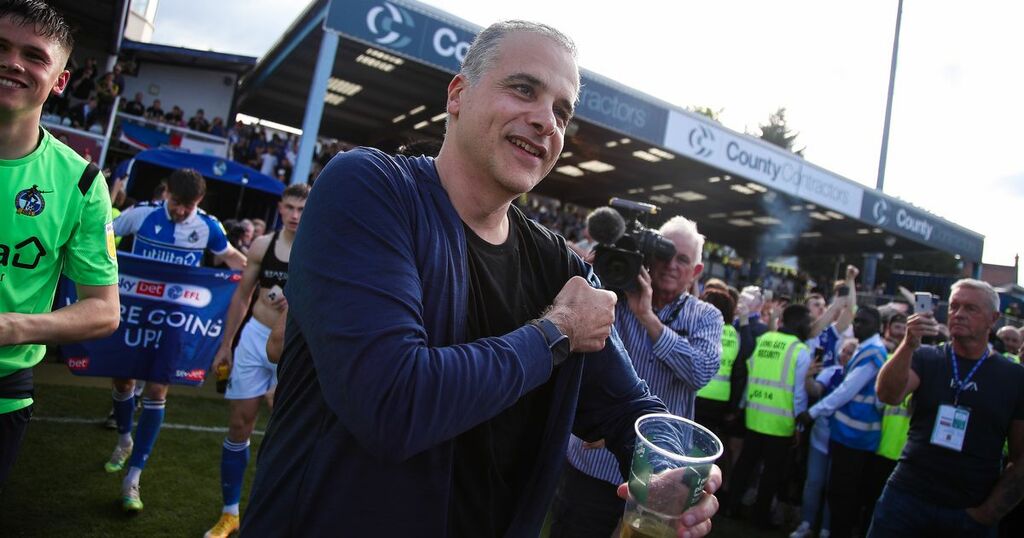 Newsroom.co.nz
Rangers legend John Greig urges fans to behave at Europa League final as ‘ambassadors’ of the club in Seville

It is difficult to know where to begin when describing the turbulence of events at Manor Farm this season.

Perhaps the obvious places might have been the underdog play-off semi final win at Frome Town, or the 43 goal combined campaign of strikers Josh Howe and Kai Simpson. Or maybe, less celebratory, the incident of official abuse in October which saw a 12-match ban for manager Lee Lashenko - and attention from national press.

They might have been where to start - if not for the recent announcement which drew the flags of the Creek to half-mast, and sent it all tumbling into insignificance.

“We’d known for a while that the end was near, but none of us in our wildest imaginations thought that you would be so cruelly taken from us just three days prior to the team’s play-off final”, wrote matchday announcer, Kevin O'Donohoe, as part of a poignant tribute on the club’s website.

The man he refers to is Geoff Sellek, Farm’s beloved ex-chairman and former player, who’s tragic passing was communicated on the morning of April 29. Bristol Manor Farm, Lee Lashenko told Bristol Live, "will always be" about Geoff Sellek, and "nobody else". On Monday, May 2, the day of Farm’s Southern League Division One South play-off final and arguably the biggest game in the Portwaymen’s history, it was a sentiment that seemed to be shared by everyone at the club.

Supporters, known as the ‘Farmy Army’, gathered early to send the team off with banners in celebration of Geoff, and his name could be heard in songs throughout the day. Such is the regard Sellek was held in at Farm, it is not inconceivable that the club, coming to terms with the sad news of his cancer diagnosis earlier this season, could have had their season fly off-track.

Instead, the opposite occurred, and it was in Sellek’s honour that Lashenko believes a “siege mentality” was born. Farm catapulted from lower mid-table into a play-off spot, losing just once since Christmas. On Monday afternoon, heading to Winchester City FC for the final of those play-offs, they had the chance to complete what would have seemed in autumn an unlikely promotion.

It was hardly unexpected then, that as two-and-a-half coach loads of Manor Farm supporters made their way through the turnstiles of Winchester, there was more than a twinge of nervousness in the air. Stakes could barely have been higher for a club of Farm’s standing, and the emotions of the day were being felt.

At kick-off, it was a nervousness that had visibly spilled onto the pitch. Within 20 minutes, Manor were two down, and uncharacteristically fragile. By the hour, it was three, and despite a valiant attempt at a fightback led by goalscorer Gosling, Winchester - a pacey, counter-attacking side, would seal Farm’s heartbreak in stoppage time and secure a 4-1 win for promotion.

Winchester had deserved their win. Perhaps the scale, the intensity, the weight of the day had proved too much. Or perhaps it was simply one step too far for a team who had already endured a whirlwind of a campaign. ‘No excuses’ would be offered from Lashenko, but there were valid ones at play during what was an unavoidably emotional event for the club.

Either way, the outstanding travelling support, in their record numbers for an away match, remained firm in their positivity. How could they not? Their club is progressing. The last home game of the season also brought record numbers, and their league position proves that a future beyond the Southern League is not just possible, but ever likely.

Not only are Farm looking upwards, but the club is an inherently enjoyable place to be. There is a refreshing community aspect, something that seems increasingly vacant at higher levels of the game in Bristol. There are young fans, veteran fans, City supporters, Rovers supporters, non-league hipsters and connoisseurs, even students from outside of Bristol who have become engrossed with the club to the point of following them across the South West. There is also a scarecrow. Tony the scarecrow. Manor’s mascot, with a claim to being their most dedicated supporter.

“You get to know everybody”, Tony says of the club. “Everybody becomes your friend, and you’re part of an extended family who all look out for each other, even the players become your friend, there is no standoffishness here”. It’s a sentiment echoed by Farm’s media officer, Bill Ledbury, who since taking the job post-graduation last year has “fully caught the bug”.

“The Creek is just an infectious place to be around”, he remarks. “Everyone is so welcoming - you feel a part of the Farmy Army from the beginning. Without sounding too biased, I think Bristol Manor Farm epitomises everything that’s great about non-league football, there’s no doubt that people find it a refreshing club to come to for football in Bristol”.

And that, beyond the heady heights of the seventh tier which may still be to come for the Portwaymen, is surely the grandest of legacies Geoff Sellek has left behind. A club that has a place in the hearts of such a diverse range of people, but all for the same reason - it’s ability to welcome you in with open arms.

Although it is not all strictly cuddles for Farm. They remain determined to build on the foundations laid by Geoff, and in the words of Ledbury, nail down their emerging status as “Bristol’s third club”. There can hardly be anyone keener to do so than Lashenko, who after reflecting on the Winchester defeat for the length of a coach journey home, is still “numbed”, but with one eye on the bigger picture.

“Our ambitions at this club are to continually progress”, he said. “When I joined, it was near the bottom of the Western League, now we’re in the Southern League and we had a game today that could have got us promotion to one [division] off conference level”.

“It is a club on the up”, Lee continues, “and it's a club that seems to have an attachment to it that means once you come to represent it as a manager or a player or a supporter, you can’t leave. I came through the door here just over nine years ago, on a couple occasions I might have moved onto something different or not done football at all, but with Geoff and the warming feel this club has had to it, it’s like you can’t walk away”.

Bristol Manor Farm may be continuing life in the eighth tier next season, but the colourful "club on the up" holds no intention of stalling.