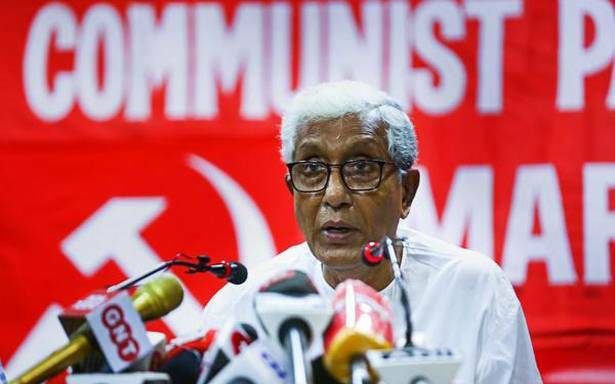 On September 7 and 8, 44 party offices of the Left Front in Tripura were torched. The CPI(M) claims that 67 houses and shops of its supporters were vandalised. Scores of other supporters were assaulted leaving at least ten of them seriously injured requiring hospitalisation. Former Tripura chief minister Manik Sarkar says the volatile situation reflects the frustration of the people over unfulfilled promises.

The elections are a good 18-months away but the political situation in Tripura is already volatile. What is the reason for this?

The reason is that the BJP has failed to deliver on the promises they made ahead of the 2018 Assembly polls. Urban, rural population, women, youth — in fact the entire population of the State — is angry and frustrated. They feel cheated.

The CPI (M) meanwhile has not been sitting idle. We have been raising the burning issues of livelihood, food, health care facilities and so on. Gradually, the participation of people in our campaign programmes have improved and that is what has triggered these attacks on our offices. On September 6, they tried their best to stop me from attending a protest in my constituency, Dhanpur. This was not their first attempt; time and again they have tried to stall visits to a constituency that I have represented for 25 years.

The vote share of the CPI (M) has been declining since the 2018 Assembly polls. Have you managed to cover the lost ground?

Braving all odds we are going to the masses, listening to their problems and looking for solutions. The people who were misled to desert us in 2018 are slowly returning to the Left. They have realised their mistake — in fact many of them come apologising that they got swayed by the BJP. Even those who have always been anti-Left and who voted only to oust the Left government have also started talking to us and aligning with us. They realise that there is no other alternative to BJP but the Left parties.

The CPI(M) is accused of Bengali majoritarianism in the State and was also one of the key reasons for your defeat in 2018. Has the party done any course correction in this regard?

It is absolutely wrong to say so. We could not have formed the government in the first place without support of the tribal population in the State. Right from the beginning in Tripura, the bourgeois political parties, including the Congress, have tried their best to isolate Bengalis and the tribals. Our government’s biggest achievement was to bridge this gap. I will not deny that a section of the tribals was not with the Left, but these were mostly those associated with the princely family of the State. They always stayed back with the Congress. Now the same faction headed by Pradyut Maniyka has formed the new party TIPRA. He was himself the Congress’s State president, his father was thrice elected as Congress MP and his mother was a minister in Congress government. And yes, the BJP has managed to sway a few among the younger generation in the tribal community by creating confusion and anti-Left propaganda. When people are confused it is not easy to bring them back, it is a continuous process.

It is not just the BJP, now you also have to contend with the TMC. How do you face the dual challenge?

Trinamool Congress has always been around. The only difference now is that Kolkata based media who are controlled by them are able to create a hype. West Bengal and Tripura may share a border but we are not alike.

After the debacle in West Bengal Polls of May 2021, your party claimed that the Left Front was squeezed out of the equation because of the bipolar contest between BJP-TMC. Isn’t there a possibility of a repeat of such a scenario in Tripura too?

Again as I said, the situation in West Bengal and Tripura is completely different. Success in West Bengal does not automatically translate into a victory in Tripura. And even in West Bengal, they are always in campaign mode; have they delivered on any of their lofty promises? Let them work in the State, we will continue to do our work here.

The CPI(M) says that its 21 workers were killed in 42 months of the BJP government. Recently, for two continuous days, we saw widespread violence against the Left. In a similar situation in Bengal faced with violence over the years, we saw a lot of your workers deserting you to join the BJP. What makes Tripura different?

Our main weapon is our ideology, our sincerity and our commitment towards the masses. That is what we have been doing and that is what we will continue doing. People may commit mistakes. They can not make the correct decision each time. And from these mistakes they learn. We are also learning from our mistakes and from our loss. Our main task is not to disbelieve and disrespect people.