Tribals of Samalammakonda finally get to see bulbs glowing 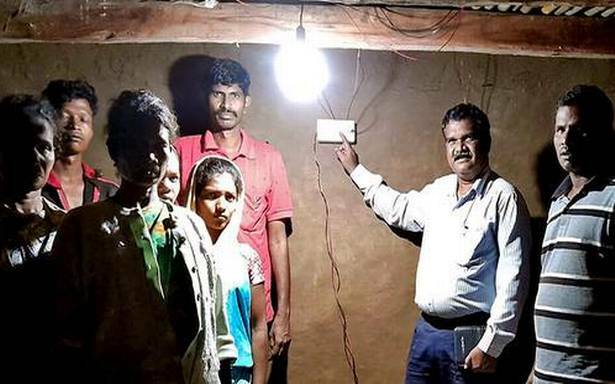 The agitations organised by the tribal families living atop Samalammakonda of Cheemalapadu panchayat in Ravikamatham mandal during the past three years seeking power supply to their hamlet have yielded results at last. A Good Samaritan and his colleagues joined hands to make it a reality.

Around 50 people belonging to 10 families, had been organising protests on and off, seeking power connectivity and other basic amenities to their hamlet. The news of the protests, which appeared in the media, caught the attention of Joseph Henry, a Pastor at Christian Brethren Assembly Church of Anakapalle.

He went to the village, interacted with the residents, and understood their problems.

Mr. Joseph, along with some other members of the church, arranged for three bulbs for each household apart from four streetlights. He also installed a 1.5 kw capacity solar power plant at a cost of ₹1.20 lakh, much to the delight of the residents.

The power supply to the hamlet began on Monday night, bringing smiles on the faces of the families.

They performed Dhimsa in the honour of their benefactor.