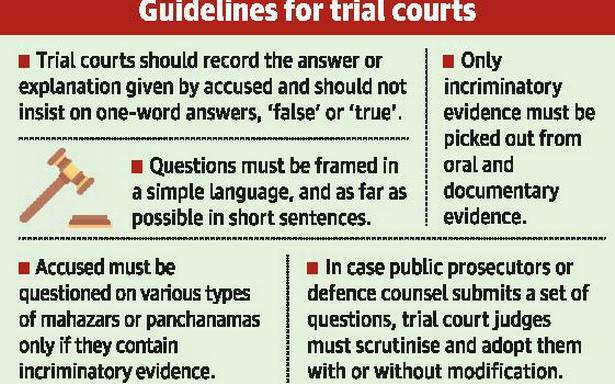 The High Court of Karnataka has issued guidelines to ensure that the trial courts prepare simple and unambiguous questionnaires while posing questions to the accused to enable them to personally explain circumstances while appearing in the evidences against them under Section 313 of Code of Criminal Procedure (Cr.PC).

“The questions must be simple and specific to the evidence against the accused. A long string of questions couched in complex sentences must be avoided. Several distinct matters should not be rolled up, and every question must cover a distinct incriminatory evidence,” the High Court said.

The High Court also directed the Karnataka Judicial Academy to prepare model questionnaires and circulate it to all trial courts for guidance.

Justice Sreenivas Harish Kumar issued the directions while allowing a petition filed by two accused persons complaining about complexity of questions posed to them by a trial court in Mysuru in a murder case.

“Section 313 of Cr.PC embodies the fundamental principle of ‘Audi Alteram Partem’. Since this is the stage where the accused gets an opportunity to explain an inculpatory evidence against him, the questions must be framed in such a manner that he or she understands them,” the High Court made it clear.

While questioning the accused, the High Court said, not only the incriminatory oral evidence but also documents and material objects indicating adverse evidence should be brought to the notice of the accused.

The High Court said that preparing questionnaires equal to number of accused is not the correct procedure and it is also a waste of time. “It is enough if only one set of questions is prepared, but what is required is to frame distinct questions as against every accused. And if a witness speaks at a time against two or more accused, a single question against them may be framed but their answers must be recorded separately one after another,” the High Court said.

The High Court also asked the trial courts to make use of the amendment made to Section 313 of Cr.PC in 2009 permitting the trial judges to take the assistance of public prosecutors and defence counsel in preparing questions.