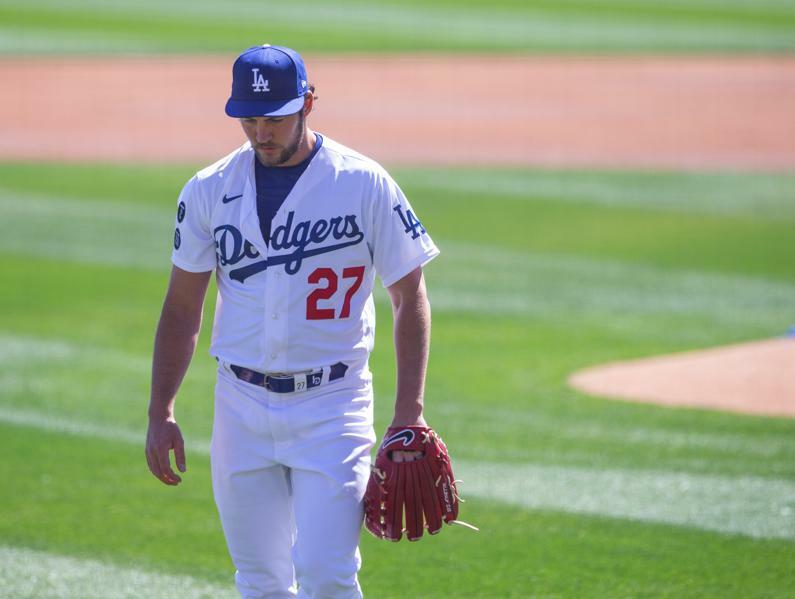 “Hey guys, I know you haven’t heard from me in a while,” Bauer’s video begins, as the Los Angeles Dodgers pitcher, dressed in a blue shirt and a backwards-facing “Bauer Outage” cap, walks down a street while talking to the camera.

Bauer has not pitched since June 28, a day before he was accused of sexual assault by a 27-year-old San Diego woman. The woman filed a request for a domestic violence restraining order against Bauer in civil court on June 29, and the document included a declaration by the woman in which she made numerous allegations. She claimed Bauer choked her to the point of unconsciousness during two sexual encounters at his Pasadena home in April and May; that he had non-consensual anal sex with her; and that he punched her in the face and elsewhere on her body during the second encounter.

The woman also alleged that injuries she sustained from her encounters with Bauer required hospitalization. Bauer’s agent and attorney, Jon Fetterolf, said in a June 29 statement that Bauer “had a brief and wholly consensual sexual relationship” with the woman.

Pasadena Police opened a criminal investigation of Bauer, while MLB began its own, separate investigation of the 30-year-old pitcher. Pasadena PD eventually presented the Bauer case to the Los Angeles County district attorney’s office on August 27, and a spokesman there confirmed Wednesday that the case is still under review. MLB’s investigation is ongoing, and sources have said the league won’t render a decision on Bauer until the criminal matter has concluded.

Baseball commissioner Rob Manfred has the authority to suspend a player if the league deems he has violated the Joint Domestic Violence, Sexual Assault and Child Abuse policy implemented in 2015, even if the player is not charged or convicted.

During a civil proceeding in August, a judge denied the San Diego woman’s request for a permanent restraining order against Bauer. The four-day hearing in L.A. County Superior Court featured testimony by the woman, but Bauer invoked his Fifth Amendment right. He has not been arrested or charged.

Except for a statement he posted on social media in mid-August — where Bauer and his representatives refuted a Washington Post report that detailed assault and harassment claims made against Bauer by an Ohio woman — he has been quiet, a direct departure from his constant social media presence before the sexual assault allegations surfaced.

Bauer’s representatives issued a statement last month that said the right-hander and reigning NL Cy Young winner had agreed to extend his paid administrative leave through the ‘21 playoffs “in an effort to minimize any distraction to the Dodgers organization and his teammates.”

That proved to be fleeting.

“I look forward to speaking about the false and materially misleading allegations in the future,” Bauer said in the video Tuesday. “But for now, this is what I’m able to share with you. One legal matter has been resolved. The judge’s detailed decision is available and it speaks for itself. There is a pending matter, which I’m not able to speak about at this time.”

There are actually two pending matters — the criminal case under review by the Los Angeles DA’s office and the ongoing MLB investigation. As for the timing of Bauer’s video, it could not have been more awkward for the Dodgers, who have distanced themselves from their $102 million pitcher the past three and a half months. The Dodgers began their World Series title defense Wednesday night with a dramatic 3-1 win over the St. Louis Cardinals in the NL wild-card game.

A Dodgers spokesman had this succinct response when asked if the team had any comment on Bauer’s video: “No.” Bauer has two more years left on his deal with the Dodgers and he earned $38 million this season.

MLB, whose showcase month is October, was probably hoping Bauer would not try to seize the limelight this postseason, but Bauer made it clear in the video that he doesn’t plan to remain in the background.

“So with that being said, I’m going to be rolling out some baseball content here throughout the postseason,” said Bauer in the video. “This is a channel that aims to celebrate baseball culture and entertain. And I love bringing you guys along for that ride with me. So, I’ll see y’all in a video here soon.”