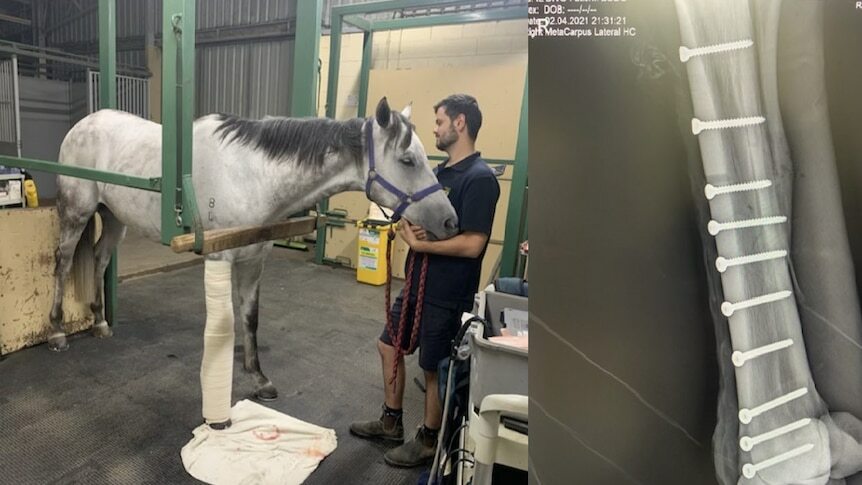 Grahame Begg is the first to admit that Il Divo was far from a champion on the track, but that mattered little when the galloper shattered his leg in April.

The flashy grey gelding was having his first run back from a break in a modest race at Pakenham in regional Victoria when the unthinkable happened.

What caused the spiral fracture is unknown, however the horse's trainer knew something wasn't right when his galloper slowed suddenly in the shadows of the post.

Subsequent scans revealed the full extent of the injury — a spiralling fracture that, more often than not, results in a horse being euthanased.

"We really just wanted to do right by the horse, we felt we owed him," Begg said.

The galloper was floated from Mornington to Shepparton where he underwent extensive surgery to insert 10 screws in his leg, all while standing up.

The surgery was a success, Il Divo's leg was bandaged, but that was only the first half of the ordeal.

Not out of the woods

A groggy Il Divo woke to a fully bandaged right off foreleg and doctor's orders of rest and recovery.

But for a racehorse unable to lie back in bed, that's no easy task.

Il Divo was kept on his feet at the Shepparton clinic for two months before moving to an equine rehabilitation facility in the Goulburn Valley, where his aches and pains were tended to.

"He wasn't out of the woods for some time," Begg said.

"He had to be able to be stabilised and be able to bear weight after a long period of time. They took such marvellous care of him."

After five months cooped up in a box, Il Divo was let out into a paddock this week for a cautious trot around which the grey relished.

His vet bills are estimated to be just shy of $50,000 and he will never race again.

But Begg believes it's been worth the cost.

"He wasn't any champion but he was very honest.

Il Divo is owned by 90-year-old Hall of Fame trainer Neville Begg (Grahame's father), and is now set to live out his days as a paddock horse in Cootamundra.

Grahame Begg said he hoped the industry took note of the dedication and care given to Il Divo.

"We're very proud of the lengths that everyone's gone to to be able to achieve this outcome.

"I think that this is a benchmark to be able to achieve that. You've always got to give them hope and see how it goes.

"It makes us very proud to be able to give that back to that horse and give him that chance.