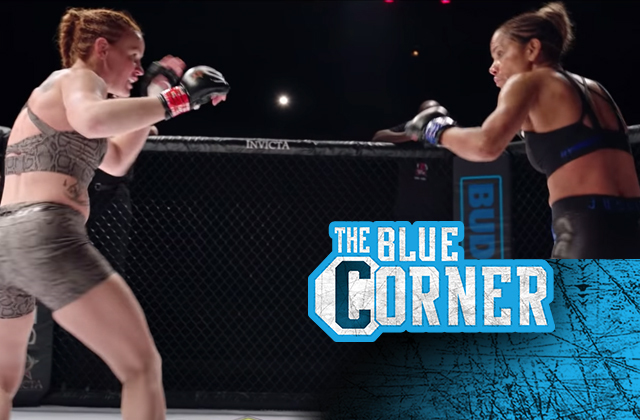 Stop us if you’ve heard this MMA movie plot before.

A former fighter has fallen from grace and is done with the sport, but gets put in a position to have to make a comeback – against the odds – and fight back to glory. Typically, there’s underground fighting involved, and oftentimes family drama.

On the surface, from the looks of the new trailer for “Bruised,” that’s exactly what we’re going to get. But there are some twists on this one that might set it apart from the slew of others.

The main character in “Bruised” – Jackie Justice – is a woman, for starters. And this isn’t a straight-to-DVD B-movie, either. It had its premiere at the Toronto International Film Festival a year ago and it’ll drop on Netflix next month. It features UFC women’s flyweight champion Valentina Shevchenko and appears to have its climax in the Invicta cage.

And if all that wasn’t enough to give it some cred, it stars and was directed by Halle Berry.

Netflix’s official tagline says this: “Years after a humiliating defeat, an MMA fighter grabs one last shot at redemption when the young son she left behind comes back into her life.”

If you need a refresher on Ms. Berry, she is the only Black winner in history of the Best Actress award at the Oscars. She won for “Monster’s Ball” 20 years ago. She also has an Emmy, Golden Globe and two Screen Actors Guild awards in her trophy case.

Her resume includes Storm in three X-Men movies; she was a Bond girl in “Die Another Day”; she played Catwoman in a standalone Batman spinoff; and going into the way-back machine, she was in Spike Lee’s “Jungle Fever” and had an on-screen romance with Eddie Murphy in “Boomerang” in the early ’90s. More recently, the 55-year-old Cleveland native was in the “Kingsman” sequel in 2017 and “John Wick: Chapter 3” in 2019.

To be certain, Berry is a silver screen all-time great. But she’s also been a longtime MMA fan and has been cageside at plenty of UFC events. In February 202, she was on hand to cheer for Shevchenko at UFC 247 in Houston. While there, she met Amanda Nunes, too – who has a role in “Bruised,” according to IMDB.

Berry wasn’t always attached to “Bruised.” It initially was going to star Blake Lively and was going to be directed by Nick Cassavetes. Three years ago, Berry signed on for her directorial debut and took over the lead role, as well.

She worked with several prominent fighters training for the film – and there’s been some controversy attached to that, as well. Current Bellator fighter Cat Zingano sued Berry in August. According to the suit, Berry wanted Zingano in the film. When Zingano got a UFC fight offer while she still was with the promotion, Berry told her she had to pick the fight or the movie for insurance reasons. Zingano picked the movie – and the UFC subsequently released her. Not long after that, the suit says, Berry told her she was out of the movie – because she was no longer in the UFC.

From the looks of the trailer, Berry’s character fights her way back to the point she gets to face a character played by Shevchenko in an Invicta fight, giving the plot, which to be certain has been done before, some extra cache.

(Oh, and in case you’re wondering, it seems to be just a coincidence Berry’s character in “Bruised” is “Jackie Justice,” and Berry was married to former baseball standout David Justice from 1993-1997.)

Check out the trailer for “Bruised” in the video above. It gets its release on Netflix on Nov. 24.