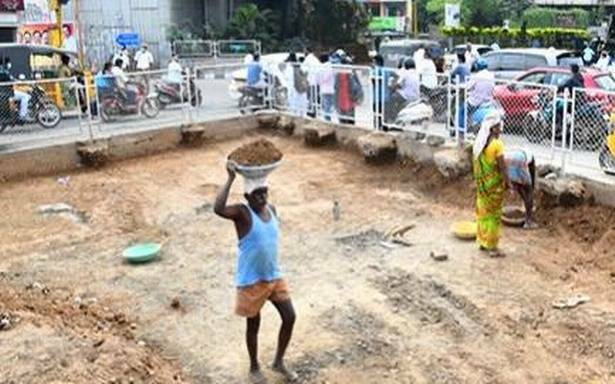 The National Highways Authority of India (NHAI) has started demolishing a portion of the traffic islands in all four directions around the Green Circle below the elevated Bengaluru Highway (NH 48) in Vellore.

The aim is to decongest the Green Circle, a gateway to the Fort City from the highway that carries 80-100 vehicles per minute.

Formed a decade-and-a-half ago, the Green Circle junction is a concrete structure with landscaping and flash LED lights. It is maintained by the Vellore Institute of Technology.

The roundabout serves as a major intersection for vehicles going to Chennai, Tirupattur, Chittoor through Katpadi and into the heart of the Fort City off the NH 48. Traffic snarls are common at the junction during peak hours as vehicles take a long time to cross the roundabout. “As of now, the Green Circle will retain its space. On the other hand, traffic islands around it will be reduced to provide more space for motorists,” said an official of the NHAI.

According to the plan, 20 metres of the traffic islands will be reduced to provide space for motorists. Digital traffic signals will be relocated to the resized portion of the islands with reflectors and warning signs. Two high-mast lamps were also removed to facilitate the work. They will soon be reinstalled. Officials said more road space would also help large vehicles that ply between Vellore town and Katpadi and Gudiyatham and Chittoor negotiate the roundabout easily.

At present, all vehicles from Chennai are allowed to take the service lane near the Green Circle to reach Vellore’s Old Town and Katpadi, resulting in traffic chaos at the Green Circle.