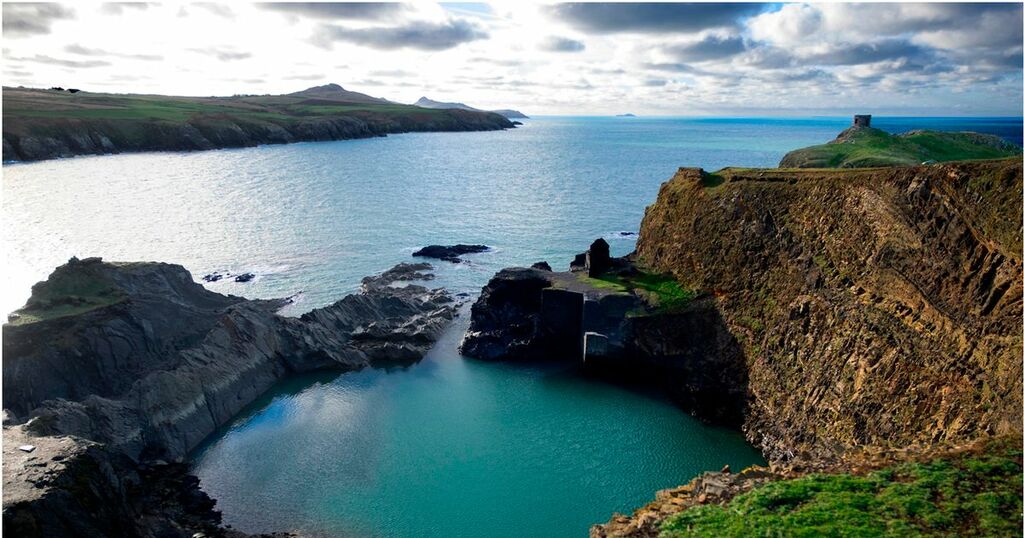 12 places in Wales which make you feel like you're abroad
With a heatwave on the way, destinations like these will show you that you don't need to travel afar for…

From tales of mermaid and fairy encounters to the hearing of eerie noises and sightings of mysterious supernatural light, Wales'…

The Times of India
One subscription that gives you access to news from hundreds of sites
Goa Forward Party meets governor, demands imposition of President rule

The Times of India
Get all your news in one place
Latest Entertainment news:

Pedestrian.tv
Read news from The Economist, FT, Bloomberg and more, with one subscription
Learn More
Introducing an Expanded Books Section

The Atlantic
20 years ago, the most underrated Star Wars movie changed canon forever

Pedestrian.tv
From analysis to good news, read the world’s best news in one place
We Left Russia, Maybe Forever

Tracing the footsteps of the Vikings in Wales

There are some historical events that continuously fascinate us, no matter what century we’re living in or what geographical location we might inhabit. One such period is the extraordinary rise and expansion of the Vikings through mainland Europe, Asia, and Great Britain.

It seems nothing can diminish our incessant preoccupation with these pagan raiders and traders. The 19th Century was filled with operatic performances introducing the misguided notion that Vikings wore horned helmets. Scotland and York annually host Viking festivals, and streaming services like Amazon and Netflix keep producing Viking-themed exclusive TV shows.

In these retellings, Wales seems to be missing, or at least minimised. It’s true that Wales was not occupied by Vikings in the same way as parts of Ireland, England, and Scotland. However, the south west area of the country does bear tell-tale signs of their presence.

Some of our most popular towns and cities, including Swansea and Cardiff, have Old Norse names, and many coastal areas, including Pembrokeshire’s islands, betray Viking origins. From ancient artefacts now housed in museums to geological wonders shrouded in myth and legend, there are many places within Wales’ rugged terrain that’ll shed light on our part in the ever-evolving Viking saga.

Read more: Intriguing Welsh heritage sites you can visit to learn more about our history and culture

Swansea’s strategic location by the sea means it has been shaped by influences beyond the ocean’s horizon for centuries. Its establishment in the 10th-11th centuries was thanks to a bloodthirsty Viking called Sweyn Forkbeard. He was a king of Denmark who tried to overthrow his father, Harold Bluetooth (a Viking who led an invasion into England, burning women and stabbing children with lances). He was also the father of King Cnut, who famously wanted to stop the tide when it threatened to wet his throne and feet.

Sweyn Forkbeard was shipwrecked in Swansea Bay and subsequently led a series of raids in the area before making it a Viking trading post. Following the ancient tradition of naming a place after its ruler, the area became known as Sweynsey, meaning Sweyn’s Island. As you walk the city’s streets, be aware that the foundations – the main street parallel to the river with lanes running back at right angles – are like traditional Viking towns.

Much like Swansea, Cardiff was raided in 850 AD. It was first established as a Viking settlement on the banks of the rivers Rhymney and Taff, and Cardiff’s port was later added to it.

Some of its streets have Old Norse names, like Dumballs Road, Womanby Street and Lamby Way. The latter was a Viking settlement trading along the River Rhymney, while Dumballs Road is believed to have been another camp. Womanby Street hasn’t changed significantly in 1200 years, making it the oldest lane in Cardiff.

Today, the Norwegian Church Arts Centre in Cardiff continues the tradition of Scandinavian influences on the city. It was once an important meeting place for Norwegian seafarers; and today, its café allows you to sit back and marvel at the ancient city view.

As the story goes, between 790-1066 AD, Vikings frequently used this haven for shelter during raids on the west and south of Britain. Then, in 854 AD, a Viking chief called Hubba spent the winter here with 23 ships, bestowing his name upon the village of Hubberston.

Milford Haven’s name similarly derived from the area’s Viking activity. Milford Haven is the anglicised version of Melrfjordr, with melr meaning sandbank and fjordr translating to fjord or inlet, after the beaches along the waterway. Proud of their Viking heritage, Milford Waterfront has created a walking route called Historic Haven, taking walkers around its heritage sites and detailing the town’s history starting with its Viking settlers.

Although the warlords didn’t spend as much time in Gower as they did in other parts of Britain, they did leave tangible traces of their existence on the peninsula. In 986 AD a raiding party attacked St Cenydd’s Priory in Llangennith, and several place names suggest a Norse settlement once occupied the area.

None do this more so than Gower’s Worms Head, deriving from the Old Norse wurm, meaning dragon or sea serpent. The Vikings believed the island was a sleeping dragon, and you can walk this historic landscape, although the island is only accessibly by a stretch of land. This causeway is only visible for 2.5 hours at either side of low tide.

As the smallest city in Britain, St Davids is a popular tourist destination, with many eager travellers looking to visit its magnificent cathedral and to follow in the footsteps of the patron saint of Wales.

But long before, St David’s was a regular target for Viking activity in the late 8th Century, and a couple of bloody onslaughts resulted in the deaths of two bishops. In 999 AD, Bishop Morgenau was murdered for apparently eating meat, and Bishop Abraham was slain in 1080 AD. The monastery was repeatedly destroyed by Vikings and rebuilt, but you can view the Abraham Stone that is on permanent display in the Cathedral Exhibition at Porth-y-Tŵr. This is a carved stone with Celtic symbols that once marked the graves of Hedd and Isaac, sons of Bishop Abraham.

The Vale of Glamorgan

The Vale of Glamorgan was the recipient of many Viking raids; and, as a result, Barry Island became known as a raider base in 1087 AD, while Flat Holm and Steep Holm islands derive their names from the Scandinavian word for island in an estuary.

Today, travellers can reach both islands by boat, where you’ll discover that the Vikings took refuge on Steep Holm in 914 AD before raiding the Somerset coast at Watchet and Porlock. Flat Holm is believed to be the island where two earls, Ottir and Hroald, sailed to after their defeat by the Saxons at Watchet.

Ogmore-by-Sea is a popular spot along the Glamorgan Heritage Coast, and its beach looks out towards Tusker Rock, named after Tuska, a Danish Viking who settled in the area. The rock is completely visible at low tide and the waters around it are great for diving.

The landscape around Fishguard was once known as Cemais, and formed a part of the Dyfed County that experienced many Viking raids in the 10th Century. The Vikings in these areas, including in Fishguard, established Norse settlements and trading posts.

The name Fishguard derives from the Old Norse fiskigarðr, meaning fish catching enclosure, suggesting it was originally a trading post. Today, you can spend a serene afternoon watching fishing boats sway gently within the cottage-lined harbour walls. Evidence of Vikings in the area are in St Fagans National Museum of History which displays an elaborate Viking-style sword hilt made from silver and brass that was found in Fishguard, alongside a replica of a full sword.

The Pembrokeshire islands also bear Norse names, and were named by Vikings who sailed past this coast in the 8th to 10th centuries.

Ramsey is by far the most popular island to watch porpoises and grey seals. Its name derives from the Norse name Hrafn, meaning Hrafn’s Island.

Skokholm is a breath-taking nature reserve known for its seabirds and wildflowers, and its Norse for wooded island. Although the woodland has long since disappeared, visitors can spot bluebells, thrift, golden rod, and lesser celandine.

Skomer is the largest Pembrokeshire island, and its Norse name Skalmey means cleft or split island, denoting the two bays on each side of the island. Skomer is known for being a National Nature Reserve of international importance for its seabirds, such as puffins.

Grassholm also derives from a Norse name for green island, although the island today looks white as it’s covered with gannets. Travellers can hop on a boat to look for some of the 39,000 gannets, guillemots, seals, and razorbills.

12 places in Wales which make you feel like you're abroad
With a heatwave on the way, destinations like these will show you that you don't need to travel afar for…

From tales of mermaid and fairy encounters to the hearing of eerie noises and sightings of mysterious supernatural light, Wales'…

The Times of India
One subscription that gives you access to news from hundreds of sites
Goa Forward Party meets governor, demands imposition of President rule