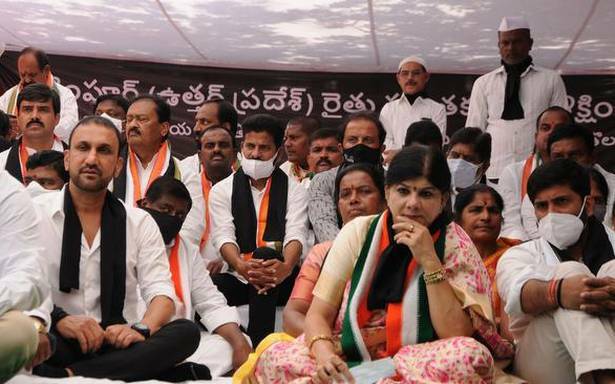 Telangana Pradesh Congress Committee (TPCC) organised a ‘mouna deeksha’ (silent protest) here on Monday condemning the killing of farmers by running over them in a car allegedly by BJP leaders at Lakhimpur Kheri in Uttar Pradesh during a farmers’ protest on October 3 and demanding removal of Union Minister of State for Home Ajay Mishra from the Ministry.

Speaking at the end of the nearly two-hour silent protest, Mr. Revanth Reddy and other leaders said the Congress party had taken up the protest condemning allowing a free run to the farmers’ killers. The protest was not the matter of the Congress party but it was the issue belonging to 80 crore farm hands who were engaged in the exercise to feed the 140 crore population.

Stating that the farming community has been protesting against the new farm laws aimed at worsening their situation when implemented, the TPCC president said the Centre was planning to mortgage the agriculture sector to two major corporates in the country. In Telangana, the ruling Telangana Rashstra Samithi (TRS) had opposed the farm laws initially but the party had backed out after Chief Minister K. Chandrasekhar Rao was “summoned” to Delhi by Prime Minister Narendra Modi and Home Minister Amit Shah.

He wondered how Mr. Modi and Mr. Shah were unmoved even after their Cabinet colleague Ajay Mishra had got four farmers mowed down by his son. He compared the farmers deaths to killing of farmers by the sand mafia in Nerella of Sircilla. He also demanded that the Prime Minister console the farmers’ families and do justice to them besides punishing the killers.

Mr. Shabbir Ali sought to know why the Prime Minister, who was spontaneous in reacting to many developments, was silent even on the social media. He alleged that both Mr. Modi and Mr. Shah were against the interests of farming community.