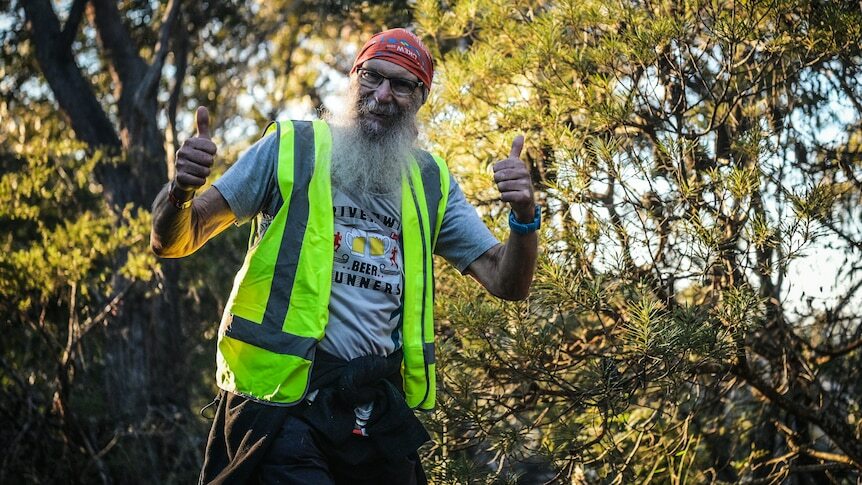 When Ross Johnston laced up his shoes for his first run at 62, he ran for 10 straight hours.

Now, at the age of 70, he's training for this 10th ultramarathon — but for friends of the Townsville athlete, hearing tales of his 100-kilometre runs aren't really a big deal at this point.

That's not the case for those unfamiliar with Johnson's adventures.

"They're often quite amazed by it, which is really silly," he said.

"Because … [almost everybody] is capable of doing 100km.

A jog down memory lane

A TV show set in the Blue Mountains, where Johnston grew up, inspired him to give the endurance sport a go.

"I instantly knew where every image was taken and what was at the end of it," he said.

Relying on some fitness built up while hiking in New Zealand, he proceeded to pound his way through a 50km stretch of his old stomping ground, which took about 10 hours.

Johnston said he "just did the short route".

But while that first run was a freeing rush, there were difficulties to come.

"[Your mind] goes down sinkholes sometimes, when it's hurting and things aren't going so well for you," he said.

Johnston said he focused on the "finish-line feeling" and tried to mindfully observe his surroundings when things got tough.

He also said it was OK to slow down.

"Unless you are right at the front of the pack and have a strong desire to podium, then time shouldn't matter," Johnston said.

Running has been a way for Johnston out of a dark place he sometimes find himself falling into.

"I've also been flying up and down with depression, going back to 2015," he said.

With his own mental health struggle, and the death of friend, he is now focussing his efforts on raising money for Beyond Blue.

His next challenge will be a 120km run from Cairns to Port Douglas.

"That was going to be the next step up," Johnston said.

University of Queensland exercise physiology chair Jeff Coombes said you didn't have to run 50km to feel the effects of exercise.

"It's going to have massive health benefits for older individuals," he said.

"For women especially, starting some sort of strength training — that's going to help with their bone health."

Dr Coombes said exercise could decrease the risk of metabolic and cardiovascular diseases.

Those who participated in activities with a social aspect were more likely to stick it out, Dr Coombes said.

He recommends visiting your GP or seeing an exercise specialist before hitting the track.

"Having a good pair of shoes is also really important," Dr Coombes said.

"We see so many older individuals, especially, starting out in flats, which is not comfortable and can lead to problems."