Tower Bridge flooded as month's worth of rain falls on England 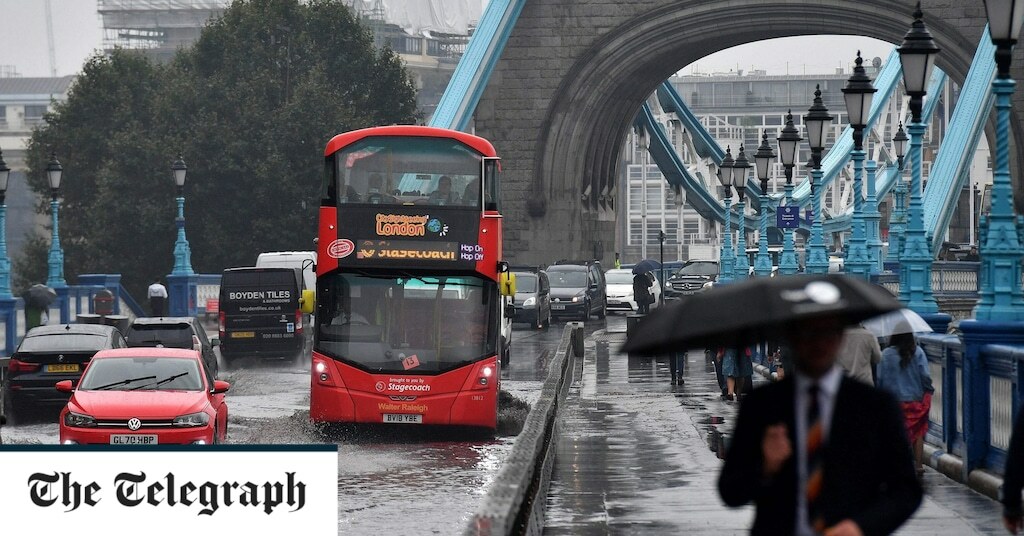 Tower Bridge was left flooded after nearly a month’s worth of rain fell over swathes of southern England in the space of eight hours.

Tube stations across the capital became partially submerged with some commuters forced to wade ankle-deep through the water.

Footage posted on social media captured cars and buses ploughing through floodwater as they attempted to drive across the tourist landmark.

It prompted warnings from the Environmental Agency who urged motorists not to drive through flood water commenting “30cm of flowing water is enough to float your car.”

The flooding became so severe that firefighters were forced to rescue four adults and two children from three semi-detached houses in Crystal Palace, south London.

More than 20 firefighters were dispatched along with four fire engines after the lower ground floors of the properties became submerged.

Train companies cancelled outward bound services from London to Cambridge due to signalling faults caused by the flooding and parts of the North Circular were closed off.

Forecasters have said a typical September would experience 50mm worth of rainfall in total for the whole month.

But the latest figures from the Met Office reveal Cambridgeshire had accrued 48.6mm of rainfall from 6am to 2 pm.

St James' Park was the hardest hit area of the capital with 19.8 mm of rain falling from early this morning.

Plenty of #rain around in South East England this morning 🌧️

Check out the radar and highest rainfall amounts recorded in the last 6 hours 👇 pic.twitter.com/9QAPG6lICj

A spokesman for the Environmental Agency said: “Working with partners in local resilience forums, Environment Agency teams have been out on the ground clearing waste grilles and screens, and stand ready to operate flood defences if needed.

“They are also ready to support local authorities in their response to surface water flooding.

Meteorologists have warned parts of southern England could see highs of 70mm if the “intense” downpour continues at its current rate.

Annie Shuttleworth, a meteorologist for the Met Office, said that as the rain moves north-eastwards throughout Tuesday, areas of the Midlands and north-east could see 40mm of rain.

She added that the rain is set to ease in the south on Tuesday afternoon, with a "low risk" of thunderstorms to follow.

Ms Shuttleworth said: "We have seen the main body of rain move further north throughout the morning, and the rain will persist for the longest in north-eastern parts of England."

Wednesday will bring drier weather across the UK, which is set to stay fairly settled with patchy sunshine predicted throughout the coming days.

Meanwhile, temperatures in Cardiff and Belfast are predicted to remain constant at around 18C (64.4F) throughout the working week.

The long-range forecast for September is uncertain, but forecasters expect temperatures across the UK to be slightly higher than average for the time of year.