Tourism during pandemic: ‘What better than Kashmir if you can’t go to Europe?’ 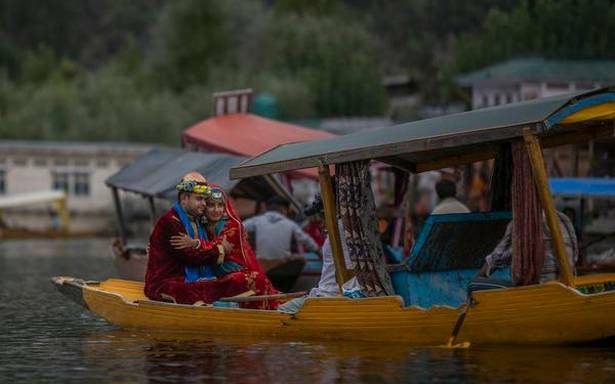 The prolonged COVID-19 pandemic may have spelt doom for the tourism and hospitality sector at large, but not in Kashmir. The valley has emerged as the most sought after destination in 2021 for premium domestic tourists otherwise accustomed to jaunts abroad, resulting in a major bump in business for luxury hotels and golf courses. A similar trend is emerging in Meghalaya, the second northeastern State after Sikkim to open for tourists, where high-end hotels are doing better than low-end and budget properties.

Tourist footfall in Kashmir valley destinations such as Gulmarg, Pahalgam and Sonamarg for the July-August period numbered around 1 lakh, according to official figures from the J&K Tourism Department. Around 76,880 tourists visited in the winter season, between January and March 2021.

“Following the second wave of the pandemic, the tourism sector has been able to make a recovery in Kashmir. Tourists were not able to go abroad, especially Europe, so what better destination than Kashmir! We received around 1 lakh tourists in July-August and are hopeful of the footfalls going up in the coming months,” said Sarmad Hafeez, Tourism Secretary, J&K.

Officials said many hotels in Gulmarg and Pahalgam, which had laid off around 60% of their staff during the first wave of the pandemic, have re-employed their workers.

In a special drive, the Tourism Department has been able to vaccinate over 90% of tourism stakeholders such as shikara (boat) and pony owners, and caterers. “We carried out an aggressive vaccination drive among people involved in the tourism sector,” Mr. Hafeez said.

The government’s decision to increase direct flights from different cities, and setting up night landing infrastructure at the Srinagar airport, has further spurred the numbers. “We have people taking direct flights from cities like Hyderabad, Ahmedabad, Mumbai, etc., now. The increased connectivity has proved a boon for tourism,” the Tourism Secretary said. The J&K government has scheduled travel festivals across the country to woo visitors for the first time in the past three decades.

But, “Most high-end hotels have above 70% occupancy, unlike budget hotels where occupancy is on the lower side. We fear there could be a drastic fall in travellers once overseas flights restart,” said Farooq Khutoo, president of the Travel Agents Association of Kashmir.

However, Mr. Hafeez said “regular” travellers are also the focus of the government’s efforts. “We are visiting Kolkata ahead of Durga Puja to instil confidence among prospective travellers,” he said.

Buoyed by the arrival of premium tourists, the golfing landscape is also changing in Kashmir, with 527 non-local golfers playing in tournaments in July-August, against just 35 for the same period last year. “Golf packages” are being launched for tourists. “We also want to focus on creating experiences for tourists. Golf courses, for sure, will be one of them,” said Mr. Hafeez.

Tour operators, hoteliers and transporters in Meghalaya heaved a sigh of relief after the State government allowed visitors in from September 1. Stakeholders in the State’s tourism industry expect business to pick up in a month when the festive season kicks in.

According to the Federation of Shillong Hotels, the occupancy rate of lower-end hotels in the Meghalaya capital and elsewhere in the State has been less than 5%, while that of higher-end hotels is 20-25%. Mid-range hotels are clocking 10-15%.

The higher-end hotels in Meghalaya cater to 15% of tourists, the lower-end and budget hotels taking up the rest.

“Lower-end and budget tourists have perhaps not recovered from the economic impact of COVID-19 lockdowns or restrictions, while the higher-end tourists have been raring to break free of home confinement,” said Parambir Singh Sehdave, president of the Federation of Shillong Hotels.

Higher-end hotels in adjoining Assam, yet to open up for tourists, are making the most of the limited scope from the staycation bug that has struck the big spenders. Five- and four-star hotels in Guwahati have packages for local residents to enjoy a “home away from home” without having to travel out of the city.

(With inputs from Rahul Karmakar in Guwahati)