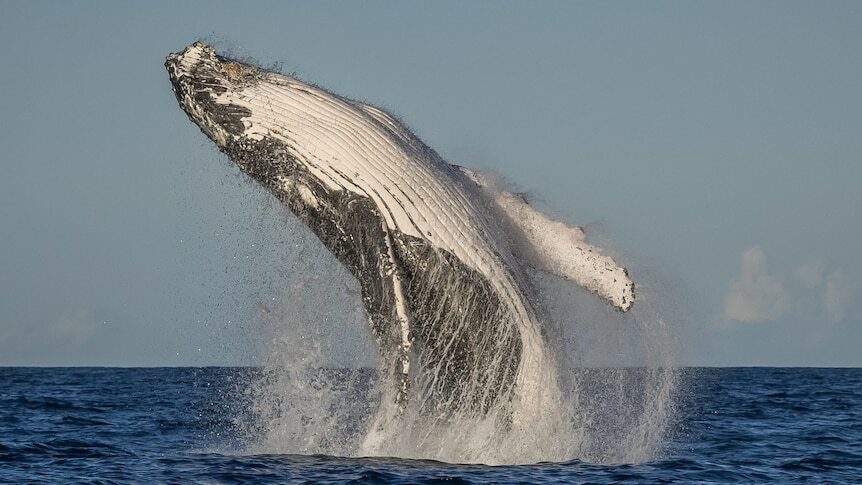 It's that time of year where whales on the NSW Far South Coast are jumping for joy but lockdowns impacting Sydney, Canberra and Melbourne have prevented tourists from coming to enjoy them.

The southern migration of whales can be spotted off the coast of South East NSW from mid-August to November.

Simon and Jessica Millar from Sapphire Coastal Adventures operate whale watching tours and are staying positive about the future of their industry despite ongoing lockdowns causing a far from ideal start to the season.

"It's been a pretty ordinary start," Mr Millar said.

"We're OK because we've been established for quite some number of years, but it's obviously not great.

The couple runs cruises out of Merimbula and Bermagui on the Far South Coast and from Sydney where the initial lockdown began in June.

The Millars squeezed in one week of tours in Bermagui in August and had promising bookings for the remainder of the season before the regional NSW lockdown kicked in and subsequently extended.

NSW Deputy Premier and Member for Monaro John Barilaro says an announcement will be made on Thursday, following a crisis cabinet meeting on Wednesday evening, as to whether the lockdown in regional NSW will be extended beyond September 10.

"On Wednesday, we'll have everything submitted to health. We'll go to the crisis committee and then we'll be making a decision about what happens in the regions," he said.

"There are big parts of regional NSW that haven't got a case … and haven't had a case in this outbreak and I think you can't keep suppressing something that doesn't exist."

Two cases of COVID-19 were recently detected in South East NSW as well as a series of positive fragments in sewage.

The Millars estimate they had lost more than $1 million so far across the three cruises, but hoped bookings would pick up again once lockdowns eased.

But Ms Millar said consumer confidence had taken a hit.

"Normally we get a lot of forward bookings this time of year but people are not booking," Ms Millar said.

"The bank balance is going the opposite way so there have been lots of refunds for people who are not able to travel."

Jenny Robb's kayak and camping business Kiah Wilderness Tours, located south of Eden, has been impacted by bushfires, floods, and COVID-19 since 2019.

She was receiving a COVID-19 micro-business grant to stay afloat during lockdown, but it had been a tough journey.

"I have to say I've had my moments in the past couple of years," Ms Robb said.

Ms Robb said the eligibility criteria of the grant initially did not consider businesses impacted by natural disasters in 2020, but that had since been amended.

She said it was a stressful four-week process applying for the grant, where she even considered looking for other work during that time, but her confidence in local tourism had since been restored.

"I think when the floodgates open, we're going to be inundated with visitors," she said.

"It's going to go from nothing to off the scale."

It's not just tourism businesses being hit by COVID restrictions.

The local seafood industry is also struggling to access its most profitable markets.

Operations manager of the Bermagui Fishermen's Wharf Rocky Lagana said commercial fishers were finding it hard to sell their product to capital cities.

"Sydney and Melbourne are the main areas where they like to sell their seafood," he said.

Mr Lagana said there were plenty of fish biting, but overseas exports to Japan were also proving tricky.

"Our tuna boats are doing very well, but we're still struggling to find the flights to take the product to Japan," he said.

"Now we're looking into the United States, and we've been selling a bit of product over there."

Tourism traders say they will be ready and waiting for lockdowns to ease, and anticipate regional NSW will be the first to do so when the time comes.

"Most people are not going to travel until such case as the lockdowns are lifted," Ms Millar said.

"So we're looking at a predominantly local year, I would anticipate."