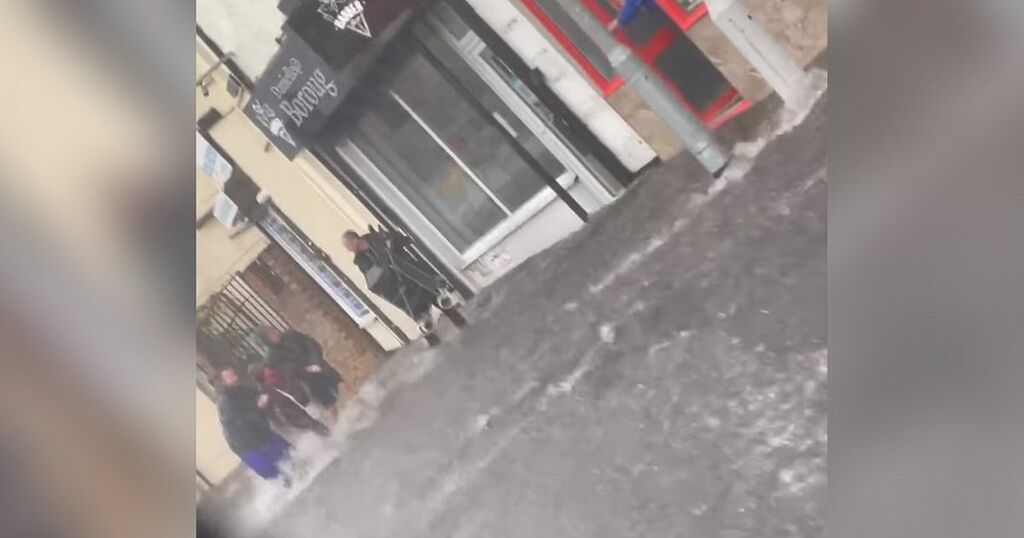 The video taken by Kara Dobbs shows the chaos along Borough Road in Birkenhead, Wirral, as water swells onto the pavements.

Kara, 28, was on her way to pick up her daughter from school and took out her phone and started filming.

As the camera shows the swirling waters on the road and cars trying to carefully navigate the adverse conditions the car comes to a crossing where people can be seen struggling.

Kara's car gets closer and it becomes clear that three men have rushed to assist a woman out of the water.

Two men can be seen aiding the woman as they walk knee-deep through the flood while another man carries her shopping trolley.

Kara told the ECHO she has never seen flooding like this in Birkenhead before, she said: "Never seen it as bad, especially in Birkenhead.

"It’s been bad in New Brighton, but that [on Borough Road] was pretty scary as we were worried our car would have broken down."

Pockets of floodwater led to chaos on the roads and trapped vehicles, like the cars at the junction of Kings Land and Old Chester Road.

Michael Yates filmed a woman wading through the downpour to help a driver 'panicking' as their car became surrounded by water.

Eventually, they were towed to safely along with another car and the road was blocked off by police.

Mr Yates told the ECHO: "The lady in the water was a local resident trying to help a man in his car who was panicking.

"I got out of my vehicle that had water come into the footwell and I stayed there for over an hour.

"There were four police cars and two fire engines that came within 10 minutes then two ambulances turned up and a fire and rescue vehicle.

"A passerby in a transit van, he looked like a gardener, got in with a rope and towed both cars out and the small Fiesta started up when it was out of the flood.

"There was a lot of confusion from motorists and they were having to turn around and find alternative routes."

There was a yellow weather warning in place from the Met Office that had forecast storms.

While patches of rain are expected over the next few days there are no weather warnings in place.