Touching community artwork restored for all to enjoy in Ferguslie Park 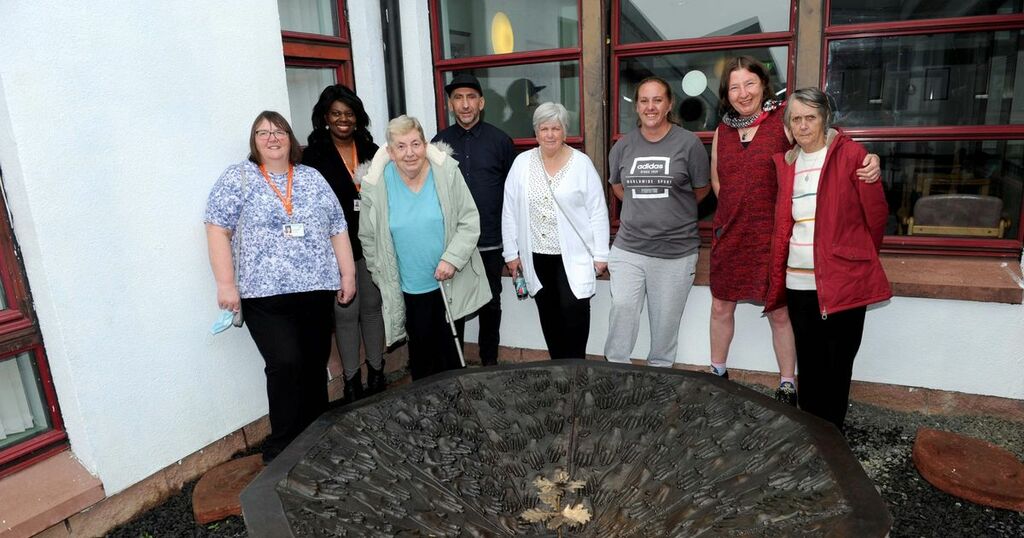 A powerful piece of community art that had been discarded and forgotten about has been brought back to life by volunteers.

Working with artist Mandy McIntosh, the Feegie Needlers have worked since 2019 to restore and give a new purpose to the impressive bronze fountain.

It was originally put in place at the Tannahill Centre when it opened in 1995. The fountain bears the handprints of dozens of Ferguslie Park residents who were involved in various community groups at the time.

But during a refurbishment in 1992, the fountain was removed from its spot outside and dumped upside down in an atrium at the centre.

Back in 2019 it was discovered by Mandy and the women who set about restoring it to its rightful glory. Now it’s the centrepiece of the transformed atrium space which is now a sensory garden with benches, plants and mosaic art.

Mandy said: “When the Tannahill Centre opened there was a community garden with lots of artwork and poems outside. It was regenerated and everything was lost – apart from this fountain, because it was too heavy to go in a skip.

“I jokingly called it the Terminator of public art because it couldn’t be destroyed!

“It’s lain upside down in this atrium for possibly 12 years.”

Mandy was initially interested in the fossil outside the Tannahill Centre, discovered during building works and donated to the centre. That lead her to discover the fountain.

“It was in a terrible state sitting upside down and forgotten about,” she said. “It’s almost a metaphor for how the people of Ferguslie Park can be treated sometimes.

“With the Feegie Needlers we researched the history of the fountain. There was no record of the artist who did the work but we tracked her down.

“She’s called Angela Gregson and she’s planning to come and visit and meet some of the people involved in it. She didn’t know what had happened to it so she’s delighted it’s been re-installed.”

The statue is in the same space as it had been dumped, but it has been completely transformed.

It no longer works as a fountain so Mandy and the Feegie Needlers decided to give it a new central motif. Mandy created a bronze statue of an oak sapling based on the oak tree outside the Tannahill Centre.

She said: “It looks like there’s a baby oak tree growing in the middle with all these hands patting down the soil around it.

“I created the statue during lockdown and it was ready to go when things opened back up.”

The fountain was in a dire state and was sent to Powderhall Bronze in Edinburgh to be recoated – and was stranded there during lockdown.

“It was there for all of lockdown and we got it back as soon as it lifted.”

The handprints are all divided into sections with names of each of the groups alongside. There is also one section simply labelled, individuals.

Mandy said it will be fascinating for people who were involved with the artwork 26 years ago to come along and discover their handprint.

And that’s what happened to one of the Feegie Needlers, Christine Reilly. She was a community health worker and was one of the hands on the sculpture as part of the Middle Years Group.

Mandy said: “Christine re-met herself 25 years on. She put her hand on her own handprint. She spotted it straight away.

“It’s a living history project. There will be children’s handprints on it who are now adults still living in the scheme.”

Funding for the restoration project came from the National Lottery’s Community Fund and Renfrewshire Council’s Culture, Heritage and Events Fund.

All are welcome to go to the centre and discover and enjoy the new atrium garden and restored artwork.

“It’s been a great project,” said Mandy. “I’m so pleased it’s been restored and is there now for everyone to see and enjoy.”