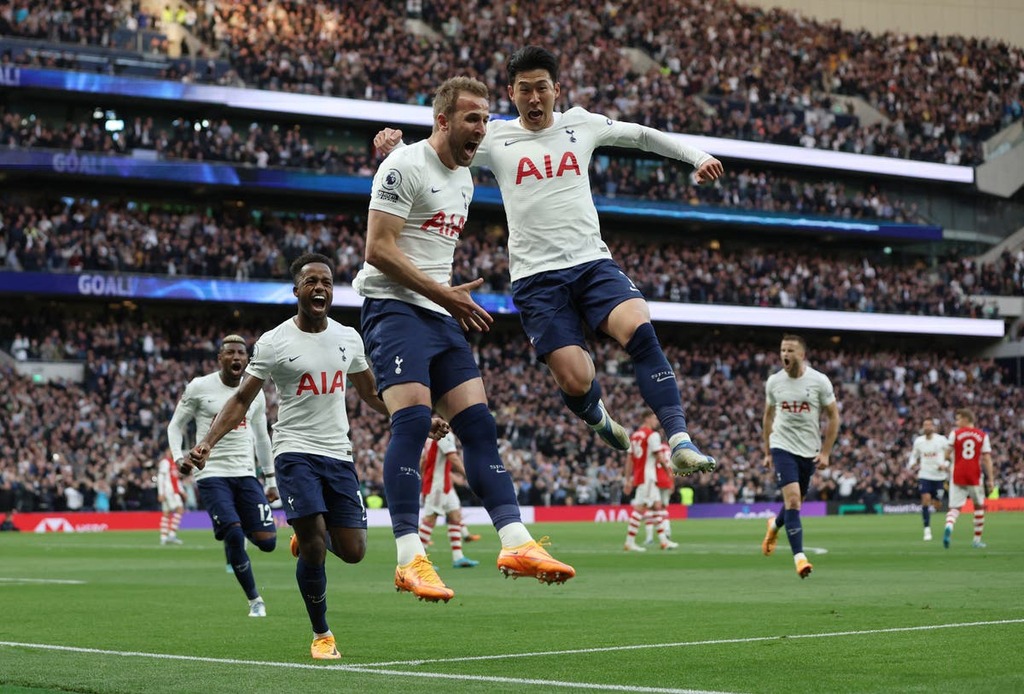 Is Tottenham vs Arsenal on TV tonight? Kick-off time, channel and how to watch the Premier League fixture
Everything you need to know about the match

Daily Mirror
One subscription that gives you access to news from hundreds of sites
Tottenham Hotspur vs Arsenal LIVE: Premier League result, final score and reaction

The Independent UK
Tottenham vs Arsenal prediction: How will the Premier League fixture play out tonight?

All you need to know about the match

Catarina Macario made history as the first U.S. player to score in a UEFA Champions League final as part of…

It is a fixture that requires no promotion, even if Antonio Conte has sought to fan the flames by questioning whether the initial date in January should have been postponed. The stakes are high, the awareness it is about far more than three points and bragging rights is clear.

The outcome of this North London derby - the first at Tottenham with a sold out crowd since April 2017 - could shape both clubs’ medium-term futures.

A win for Arsenal would see them confirm Champions League football, a defeat would ramp the pressure up on Mikel Arteta's squad with two games to go, the deficit a single point.

And the consequences off the pitch may be greater than on it.

Five years have passed since Arsenal’s last appearance at the pinnacle of club football and there is a convincing argument that right now they need the Champions League more than Spurs, who were finalists three years ago. In a world where financial muscle seems as important as on-field success, keeping up with the true elite is a bare necessity.

Despite the justifiable excitement around the emergence of several young players and supporters buoyed with renewed optimism, the balance sheet points to Arsenal being more likely to be cut adrift without the significant revenue of Champions League participation.

Yet five years ago one could not argue against Arsenal being the bigger club. Their revenue in 2016, the last time the club finished in the top four, was 67.5% more than Spurs (£391million compared to £233million).

Sponsors were drawn to red like a bull, Arsenal made more than any club apart from Manchester United in matchday revenue and the broadcast income was greater because of the on-pitch success.

By 2019 Spurs had a revenue 17 per cent bigger than Arsenal's (£435million compared to £371m) and, according to Deloitte’s latest Money League rankings, are expected to climb from 10th place now the pandemic’s worst has passed while Arsenal have slipped from sixth to 11th since 2017. The latest available figures, taken from a period when stadiums were empty, indicate Spurs’ revenue was about £34m bigger than their rivals.

“Arsenal had always been the club that had the money, the old Bank of England thing,” says John Purcell of the financial analysts vysyble. “They always had that label while Spurs were looked at as this nice club but it was only Spurs.

“A lot of investment has gone into the new stadium and Arsenal went through a similar thing before it and that’s been the overriding factor in how they have conducted themselves in a financial manager since.”

As Spurs chairman Daniel Levy said in mid-2020, the pandemic came at the worst possible time for a club seeking to reap the rewards of its new £1billion asset, which has left an outstanding debt of £706million according to their latest accounts.

“Tottenham have really, really suffered,” Purcell says. “Pre-covid Tottenham actually achieved an economic profit of £27.5million from a revenue of £460million after just moving into the stadium.

“By 2021, to give you a measure of the transformation, Tottenham’s revenue was £361m, a significant drop because of the lack of Champions League and matchday revenue, with an economic loss of £142million. In the space of two years there was a negative shift of more than £60million. That will hurt.”

When it comes to the balance sheet in 2022, now stadiums have been open for several months, the Lilywhites should be in an even stronger position as they capitalise on their decade-long NFL deal, in addition to the hosting of music and boxing events. Last week it was announced that two American football games will be played in N17 in October.

“It takes time to get back on track,” Purcell says, “but Spurs do have an advantage over most clubs in the Premier League because of the stadium. Their revenue recovery period is likely to be shorter than most other clubs.”

That is not to say Spurs will be in a strong position now the pandemic’s peak has passed, particularly when the squad remains in dire need of surgery despite improvements in January. There remain doubts that the required investment will be sanctioned by Levy and owner Joe Lewis, leaving a cloud over Antonio Conte’s long-term future.

Levy’s assertion early in the season that Tottenham lost sight of its DNA during the pandemic was a nice soundbite but a look at their transfer history points to a track record of frugality unrivalled by the other big teams.

They find themselves in a similar situation to where Arsenal were 12 months ago, recognising the need to invest in fresh blood but before being able to act having to offload highly-paid fringe members. Conte has been blunt about the need for additional options and supporters’ impression of Levy has been at its lowest ebb this season.

In terms of recruitment Arsenal are much further along the road with a league-high £149m spend last summer, though the project is far from its latter stages with a new centre forward and additional midfield options earmarked in the next window. Josh Kroenke has committed to further investment after years of complaints directed at his father, Stan, from the club’s supporters - although a degree of scepticism remains.

They have learnt the hard and painful way, most notably through the Mesut Ozil saga, with the industry’s collective belt-tightening during the pandemic complicating clubs’ ability to part with unwanted players.

“Look at the contracts signed by Ozil and Aubameyang and you end up with players locked in on high wages who they then can’t get rid of,” says Tom Bason, an assistant professor in sports management at Coventry University.

“I suspect clubs in the current climate are now reluctant to do that because you don’t want to end up with a player who is 31 or 32, not in the first team but the highest-paid player in the squad.”

Spurs, whose wage structure has been less egregious, are finding it difficult to move several players on for similar reasons and the constraints facing many clubs across Europe has restricted options.

“It’s been exacerbated by the pandemic. We’ve seen in the past 18 months that English clubs have managed OK broadly but clubs abroad haven’t and that’s cut off a sale option,” Bason adds. “That means they’re not spending money now, cutting off a sale option for English clubs. All are tightening their belts apart from the clubs who are backed by owners who can put the cash up easily.”

This time last year there were convincing arguments that the era of the ‘Big Six’ was over as Arsenal recorded a second consecutive eighth-place finish. Since then they have made clear strides, the brakes have been applied to Leicester City’s progress and such is the clear split between third and fourth right now there is a temptation to argue it is really a big three.

And that is before factoring in yesterday’s announcement from UEFA that from 2024/25 the Premier League stands to gain an additional Champions League space.

“The big six is a revenue classification and the gap between the sixth and seventh had been growing and growing since 2009 but shrunk a bit last year,” Purcell says. “Arsenal are sixth, Everton are seventh and the difference is £344million to £185million.”

The future remains uncertain, and Newcastle United’s wealth means there may be another challenger in the medium-term, but the renewal of a derby that seldom fails to produce fireworks has the potential to shape far more than just the mood of supporters.

Is Tottenham vs Arsenal on TV tonight? Kick-off time, channel and how to watch the Premier League fixture
Everything you need to know about the match

Daily Mirror
One subscription that gives you access to news from hundreds of sites
Tottenham Hotspur vs Arsenal LIVE: Premier League result, final score and reaction

The Independent UK
Tottenham vs Arsenal prediction: How will the Premier League fixture play out tonight?

All you need to know about the match