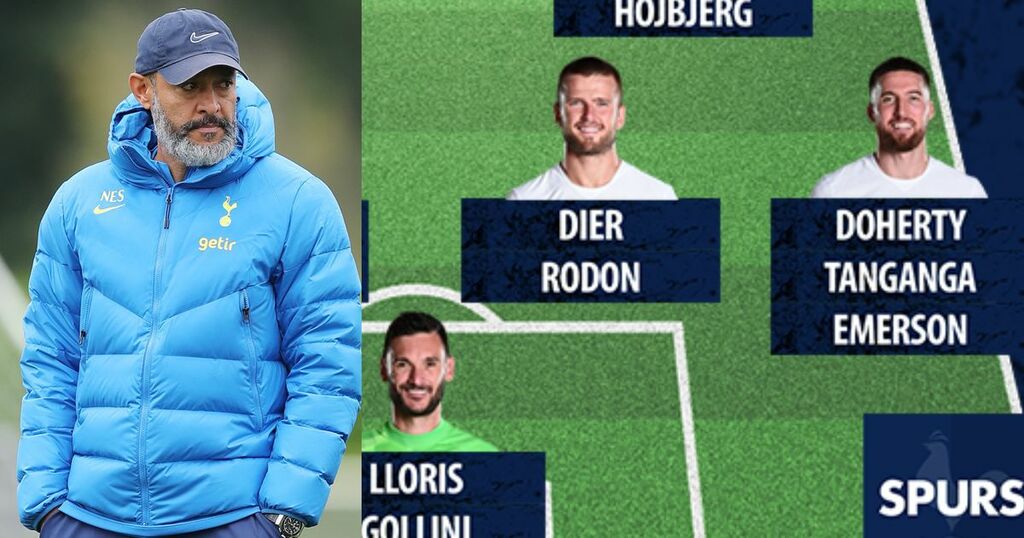 Tottenham couldn't have hoped for a better start to their 2021/22 season with consecutive Premier League wins leaving them top of the table.

All of these signings will be hoping to break into the matchday squad and fight for their place in Espirito Santo's starting XI.

Alongside the new arrivals, there are a few academy players who may make some appearances for the Lilywhites with the amount of games they are set to play in the coming months.

Lloris has been the chosen keeper for Tottenham's first three Premier League games and he has kept clean sheets in all of them. He hasn't had too many challenges come his way but has made the necessary saves and ensured nothing has got passed him so far.

Austin will be Espirito Santo's third choice shot stopper this season and he has just returned from a loan at Orlando City in Major League Soccer. Although he may not feature in many games this season, he can still learn a lot from the two options before him and may be needed if injuries arise.

Tanganga earned the Man of the Match award in Tottenham's first game of the season and has started every league game so far. Although he didn't appear in the Europa Conference League games, his performances have reflected why he deserves a place on the pitch. New signing Royal will compete with the 22-year-old for the right-back spot but Tanganga won't let his place go easily.

Royal signed a five-year deal with the club on deadline day, after a move from Barcelona on his return from Real Betis. He has expressed his excitement about coming to north London when, in a video message posted on the club's Twitter account, he said: "Hey guys, I'm here to show my joy, to be in the best league in the world and at one of the best clubs in the world. I'm very happy for the opportunity that Tottenham is giving."

The Lilywhites head coach will want to give the new signing a chance to show his ability but he will have to compete with Tanganga for the regular right-back spot.

Doherty is set to become Spurs' third choice right-back option when he returns from international duty for the Republic of Ireland. The 29-year-old has appeared in both Europa Conference League games and both of Ireland's World Cup qualifying fixtures so far. There were rumours of him leaving the club during the summer transfer window and although he has remained in north London, it appears he won't make as many appearances as he would like to.

Dier and Sanchez have been the chosen centre-back partnership in Spurs' three opening fixtures of the Premier League this season. The Colombian international is set to isolate on his return from international duty but hopefully that won't disrupt his solid performances too much. Dier received a Premier League Player of the Month nomination for his strong defending throughout August and he will hope to continue that in the coming matches.

Rodon hasn't featured in any of Tottenham's opening fixtures this season, after suffering with injury problems. On Monday it was revealed that he had returned to training with the Wales squad. This will give the Tottenham boss hope that he is on the road to becoming match fit. After the superb performances from Dier and Sanchez, he will have to work his way into the back four but could become a strong option for competitions outside the Premier League.

Romero is another of Spurs' summer signings who has featured in both Europa Conference League games and featured in the closing minutes of the opening game against Manchester City. He has shown potential with some smooth passes, although there have been minor issues on coming out of position. The Argentine is one of three Spurs players who look to face a fine when they return to the UK, after issues during their international duty.

It is quite clear on the current positions of these two left-backs, in the opening month of the season. Reguilon has been first choice in the Premier League, starting all three games which have got Tottenham to the top of the table. Davies has featured in both legs of the Europa Conference League.

Both defenders are currently on international duty, with Reguilon getting a late call-up to the squad after injury problems following Spain's game on Sunday night. Davies featured in Wales' fixture on Sunday, and both may make appearances in their countries' final game of this international break.

Currently, there is no reason why Reguilon will not keep his place in the starting line-up for the Premier League, and Davies will have to prove himself - if he features in other competitions - to replace him.

Here is where the start of Espirito Santo's depth and versatility in players begins. Sessegnon can play in a defensive or attacking role. He featured in both Europa Conference League qualifying games and played on both sides of the pitch.

He had to withdraw from international duty for the England Under-21s due to injury so may not be fit for Spurs' Premier League fixture against Crystal Palace on Sunday. However, he will want to remain a versatile option for the head coach, once fully fit.

Skipp is another England Under-21 international who has impressed since his return from his loan at Norwich. The 20-year-old has featured in a midfield three for all of Tottenham's opening Premier League games and seems to have slotted into the starting XI well. The partnership between him and Hojbjerg has been crucial in helping Spurs maintain their lead in games and he seems hard to replace on current form.

Dele Alli has featured in the midfield three in Tottenham's opening Premier League games of the season. He has shown his hard work, improving his fitness over summer and running up and down the field in all games so far. The 25-year-old scored the Lilywhites' only goal in their 1-0 against Wolves and he will be hoping to keep his position in the starting line-up as long as his solid performances continue.

Harry Winks featured in a midfield four in Portugal and in the centre of a midfield three in the second leg of the Europa Conference League at the Tottenham Hotspur Stadium. His first-leg performance was nothing special, but he slightly redeemed himself with a better display back on home turf.

Tanguy Ndombele has not made it into any of Espirito Santo's matchday squads this season. Another player who looked likely to leave in the summer but has remained at the club, the 24-year-old has been pictured in training this week and looks like he could be preparing to get back on the pitch for Spurs. He managed three goals and two assists in 33 Premier League appearances last season, and if he works hard to get in strong form he could give Tottenham some creativity in the middle of the field that they are looking for.

Nile John is one of Tottenham's academy players with potential. He started in the first leg of the Europa Conference League and came off after 45 minutes. He could make more appearances in this competition and can definitely be an option for the boss but he won't be very high up the pecking order at the moment.

Giovani Lo Celso is one of the three Spurs players who will have to isolate and could be fined for issues surrounding issues over the international break. The Argentine played alongside Winks and Sessegnon in both Europa Conference League legs and managed to get a goal in the 3-0 in the second. He has also featured in two of three Premier League games so far. His last performance was solid but he will have to work hard to replace the likes of Hojbjerg in midfield.

Hojbjerg has also featured in four of Spurs' five opening fixtures and has been one of the star players in the squad. His partnership with Skipp has been excellent and the 26-year-old looks very hard to replace in the current midfield three that Espirito Santo has opted for.

There are many options for the Spurs boss in midfield and the formation of it can be altered, depending on who is picked for each game. The current three in Hojbjerg, Alli and Skipp look irreplaceable in the Premier League but with a lot of games in the near future and injuries which may arise, it's good to have the options.

Moura and Bergwjin have divided fans in the opening month of the season. With uncertainty over Kane's future at the club, they both started the opening two Premier League games against Manchester City and Wolves. Moura started the second leg of the Europa Conference League and Bergwjin came on in the second half. Bergwjin started in the most recent fixture against Watford, but the Brazilian replaced him in the final quarter of the game. This highlights that Espirito Santo may not have decided on his first choice yet, as both have had good and bad areas in their performances. He may look to utilise both players, depending on his other options and the opposition.

Clarke is another youngster who featured in the qualifying game in Portugal after replacing teammate Nile John. The winger decided he wanted to stay at the club during the transfer window, but looks set for a very hard task in trying to break through into the starting XI with the midfield options Espirito Santo already has.

Not much to say on the striker front for Spurs. Kane is obviously the first choice and the three-time golden boot winner will look to net as many goals as possible for the club this season. Scarlett is Tottenham's only other option for an out and out striker. The 17-year-old has shown a lot of potential and had a good game in Portugal. He can learn a lot from his fellow striker and may get some more minutes under his belt in other competitions this season.

Son has scored two of Tottenham's three Premier League goals this season and has featured in a forward three in all of those games. He signed a new four-year contract this summer and will hope to continue his work alongside Kane and get some more goals for the Spurs side.

Gil was another of the north London's summer signings, in a swap deal with Erik Lamela. He has shown great potential when he featured in both legs of the Europa Conference League qualifying games. The Spaniard still has room to improve but with more game time, his high energy performances and potential could help him become a star player.

The Tottenham head coach has plenty of options for starting line-ups and he will need to make use of many, if not all of these players, with the amount of upcoming fixtures in various competitions the Lilywhites have.