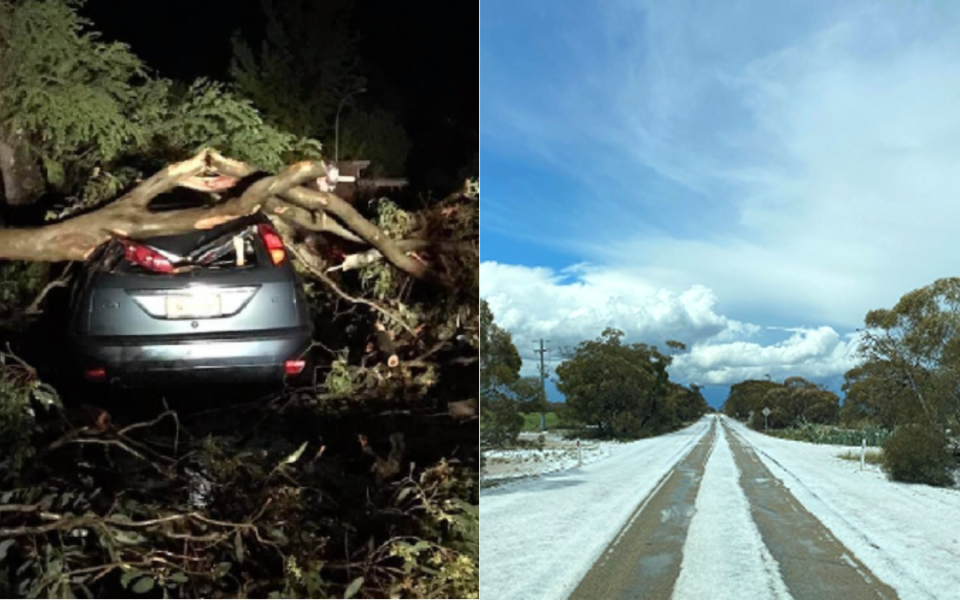 Cars were flipped and roofs torn off houses after a wild tornado smashed through the NSW city of Armidale on Thursday night as wild weather hit the southern states.

The NSW SES received 111 calls for help in Armidale as residents were trapped in their homes when the random weather event tore through the Northern Tablelands city about 10pm.

A #tornado has impacted areas near #Armidale this evening with reports of cars flipped over, trees uplifted and residents trapped in their homes. @NSWSES and @nswpolice attending

Earlier in the afternoon, fast-moving storms pummelled greater Sydney, dumping golf-ball sized hail and buckets of rain across the city and making a ceiling collapse in the Westfield shopping centre at Mount Druitt.

I guess this is Best & Less' curse of openly supporting a 2 Tier, 2 Class Segregated & Discriminatory Society.

Ah well. Suck shit to them. Feel sorry for the Customers inside though.#SydneyStorm #SydneyWeather pic.twitter.com/n9P5gPYql3

Across the state, the SES responded to more than 450 calls for assistance.

It wasn’t just NSW in the firing line as the north-west Victorian town of Pira, near Swan Hill, was blanketed in hailstones that looked like snow. It came after a storm warning was issued for that part of Victoria, alerting locals to potential flash flooding.

No, that's not snow on the ground in Pira near Swan Hill❄️

Richard from our VFF team snapped this shot of hail earlier today as severe storms continue to cross parts of Victoria.

On Thursday afternoon, the Bureau of Meteorology issued a tornado warning for Sydney as the “really dangerous” storm passed over the metropolis.

The storms were most intense over Sydney and the Lower Hunter, but hail was reported from Sydney to Cowra in NSW’s central west.

Those stones mostly between three and five centimetres, but some were even larger.

The conditions over western Sydney were particularly serious, with meteorologists seeing all the ingredients for a “very, very dangerous supercell”, said the Bureau of Meteorology’s Gabrielle Woodhouse.

Some 33 millimetres of rain fell at Woodville Golf Course at Canterbury in about 15 minutes.

By Thursday night, the most dangerous storm had passed out to sea.

Early-morning thunderstorms deposited up to 30 millimetres on parts of Canberra.