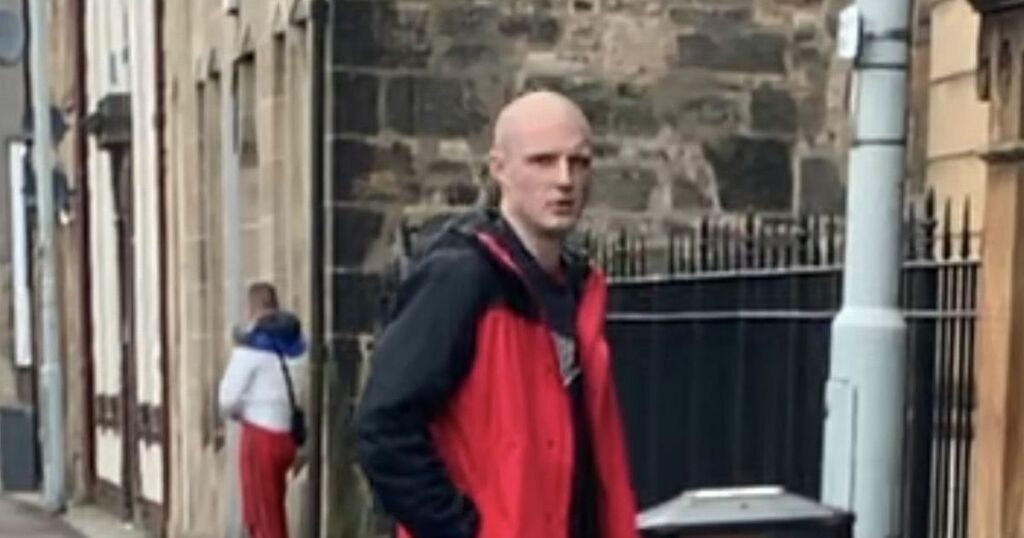 A topless thug who went out armed with a machete and a hunting knife claiming he “wanted to be arrested” has narrowly avoided a jail sentence.

David Sloan, of MacDowall Street, Johnstone, admitted grabbing the weapons and heading into the street wearing only jogging bottoms after a drinking session.

The two deadly blades which Sloan, 30, used to “grab attention” as he “wanted to be arrested” were shown to Paisley Sheriff Court.

Senior Procurator Fiscal Depute David McDonald told the court: “Around 8.30pm on November 3, Sloan was within a property in MacDowall Street consuming alcohol.

“Sloan had no clothing on the top half of his body.

“A witness saw Sloan leaving the property with a machete in his hand and wearing grey jogger bottoms and walking towards Quarry Street.

“The accused was then seen putting the machete down his trousers and the witness contacted the police.

“Around 8.35pm, police officers saw the accused at a block of flats.

“When officers exited the vehicle, they saw Sloan place something in a bush.

“They told him to show his hands and lie on the ground.

“Police carried out a search of thick shrubbery where they found a large wooden handled machete and a smaller hunting knife with a black handle.”

He said: “Mr Sloan knows he could be sent to prison today but I would like to propose you step away from that today.

“He understands that entering a street in a state of distraction and disarray causes fear to anyone in the street. He was aware of what would happen to him. He wanted to bring attention to himself, he wanted to be arrested.

“There is no rational reason for his conduct. He is now in a far more stable position than when he presented himself in the street.

“He looks forward to a happier existence.”

In court on Friday, Sheriff Gillian Craig said: “I’m very narrowly persuaded to take a step back from custody today.”

Sheriff Craig ordered Sloan to carry out 120 hours of unpaid work and placed him under supervision for 12 months.

Sloan was also placed under restriction of liberty order for nine months which prevents him leaving his house between 7pm and 7am each day.