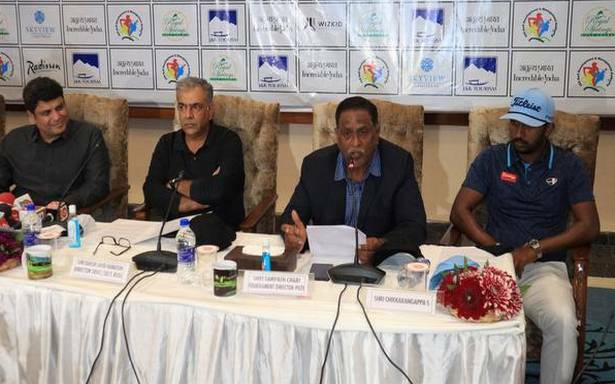 In a major push to promote Kashmir as a golfing capital of the country, top golfers are among 125 players participating in the TATA Steel Professional Golf Tour of India's (PGTI) 13th season of golf tournament at Srinagar's picturesque Royal Springs Golf Course (RSGC) from September 14.

“It's a proud moment for J&K to host the tournament, as J&K pitches itself as a golfing capital of the country,” Sarmad Hafeez, Secretary, Tourism, said.

He said the tournament was a testament to the fact that Kashmir had world class golfing infrastructure. It had a golf circuit, comprising two courses in Srinagar and two others in Gulmarg and Pahalgam tourist destinations.

“We are hopeful that local players and the students from government schools, who will be allowed to attend a golf clinic with the professionals, will go a long way and produce a player from J&K who can represent the country in Olympics in the future,” Mr. Hafeez added.

The TATA Steel PGTI will witness participation of 125 golfers, including 119 professionals and six amateurs. Among them are Olympian Udayan Mane, Indian star Jyoti Randhawa and PGTI Order of Merit leader Karandeep Kochhar.

The four-day tournament is a 72-hole stroke play event with the cut being applied after two rounds. The tournament offers Official World Golf Ranking (OWGR) points for the top five finishers.

“The tournament is in line with our long-term objective of promoting professional golf in different parts of the country. We are confident the professional golfers will have a delightful experience while competing in the divine setting of the Royal Springs Golf Course,” Uttam Singh Mundy, Chief Executive Officer, PGTI, said.

The 18-hole course, spread over 100 hectares, is of 225 meters in length with three lakes, two marshes and underground sprinkler irrigation system against the backdrop of Zabarwan hills.

The event is seen as a shot in the arm for tourism in Kashmir, which is bouncing back after facing back-to-back slumps, first due to the clampdown that followed the Centre's move to end J&K's special constitutional position in August 2019 and later due to the first wave of pandemic in 2020.

According to the Kashmir Chamber of Commerce and Industries (KCCI), J&K saw ₹17878 crore post August 5 clampdown, with tourism losses at ₹2615 crore. Around 60,000 lost jobs after August 2019 in the sector.