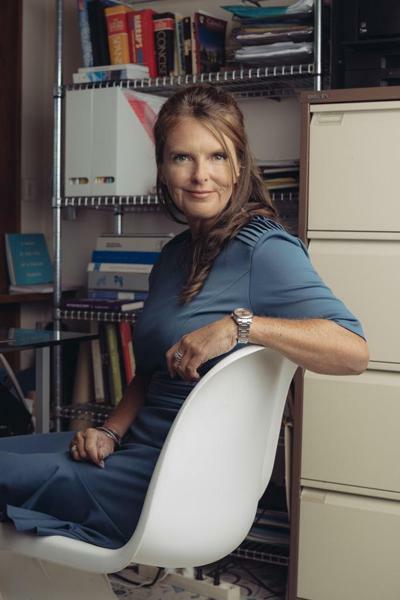 Gill thrived in the highly competitive business environment and her success in business saw her move swiftly up the career ladder to Marketing Director, General Manager and finally Senior Vice President.

This was when she started to see the impact of gender diversity issues on women and their careers, and saw that it is affecting and defeating talented women everywhere.

As a consultant, keynote speaker, board member and executive coach, she now works to drive gender equality and diversity as a key lever to build stronger businesses and stronger societies. Her book ‘Why Men Win At Work’ is now available in paperback.

I caught up with her recently for a stimulating discussion on the mistakes male leaders make when thinking about gender inequality.

Afdhel Aziz: Gill, welcome. Please tell us about your journey to becoming aware of the systemic gender inequality you encountered in the corporate world?

Gill Whitty-Collins: I wasn’t always the gender equality warrior I am now! Thanks to my parents and the mixed comprehensive school I went to, I was brought up to believe that I was the equal of any boy or man – and I didn’t even question that for a very long time. For over 20 years into my career at P&G in fact, where I flourished and worked my way up the ladder to the Senior Vice President level. And then I saw it. For the first time in my career, in my life actually, I found myself in a male dominant culture and in Board and Executive meetings that were 80% men. I acutely felt the impact this was having on me and, importantly, on the other few (highly competent) women there. The men simply were not listening to or engaging with the women in the same way they were with the men. My reaction was that I found this absolutely fascinating and wanted to understand what was happening and why, so I started reading every book and article on gender inequality I could get my hands on. That’s when I realized the extent of the issue, that it wasn’t me, or the women around me, or my company: this was happening to women everywhere, in every organization, in every country in the world. And the result is that when you look at the senior levels of any organization, whether it’s in business, sport, politics, whatever, you will see that the people in the leadership roles are over 90% men.

I discovered that there is actually a simple answer: men win at work because the people who make the decisions about who is going to get the big promotion or job believe that the man is the best performer. But we know that can’t be right over 90% of the time, because we know that women are 50% of the population and equally intelligent and competent, with equally strong leadership skills: so, looking at it simplistically, let’s say the man is the best candidate 50% of the time, not 90%.

So, the real question then is, why do we believe men are better performers than women, even when they are not? That’s what WHY MEN WIN AT WORK is about.

I wrote it because I believe that if we really peel the layers of the onion and understand at a deep level why something is happening, only then can we fix it.

Aziz: Thank you for sharing that! A lot of attention has been paid to the #Metoo movement which tackled overt sexual harassment and violence towards women. Do you believe that what you are tackling is much deeper and more invisible in nature as an issue?

Whitty-Collins: The #Metoo movement has been extremely important in shining a light on these overt, ‘bottom of the pyramid’ (as I call them) gender equality issues. It is appalling to know that women, or anyone for that matter, have been sexually harassed in their work and pressured into sex. Dealing with this and the dangerous, criminal men who do it, or who are violent toward women, has to be the first priority. This is however, thankfully, only a small minority of men and one of the unintended consequences of the focus on this movement is that it has given men who aren’t guilty of this hideous stuff the opportunity to feel complacent and to feel they can disengage from the gender equality discussion: so, they say, ‘Not me’ and we risk losing them from the conversation. By focusing (rightly) on the bottom of the pyramid stuff, we are diverted and distracted from having the ‘top of the gender diversity pyramid’ discussions we desperately need to have about the less obvious, invisible, unconscious, unintended things that good, decent men are doing that are preventing equality and holding women back. Most men are, thankfully, not Weinstein or Epsteins, but no man is above contributing to gender inequality.

Aziz: Let’s talk about the five mistakes now. What are they, in your view?

#1 Believing that gender equality as something which will naturally happen, that we are making progress and with time it will right itself, so we don’t need to focus on it or make interventions.

It is easy to fall into the trap of seeing a few high-profile women appointed to leadership roles and believing that the gender inequality issue is fixed, or on track to be. Sometimes it can feel like there are many other, bigger, more urgent priorities to focus on. But the reality is that we are not making real progress on gender equality. When we look beneath the surface at the data, we see that only 7% of CEOs are women, only 9% of Heads of State, only 25% of members of government. And we won’t see progress by waiting for this to right itself naturally, because there are so many invisible, unconscious forces in play that make it a self-fulfilling prophecy that we continue to choose men over women for key leadership roles.

In my book WHY MEN WIN AT WORK I explore these forces: the invisible power of culture, the competence vs confidence equation (which we see especially in the meeting room), the umbrella theory and many more. They are powerful, not least because they are invisible, unconscious and largely unintended, so they need to be understood and addressed intentionally.

The invisible power of culture is a key force that holds women back. If you feel you belong in and are included in a culture, you feel confident and relaxed, you can be yourself and perform. But if you feel you don’t belong, then you don’t feel relaxed and you do not perform at your best. So, if you look around you and see a male dominant team, you can be sure that you have a culture which is helping the men and holding women back, no matter how talented and competent they are. And only you and the other men in the group can change it.