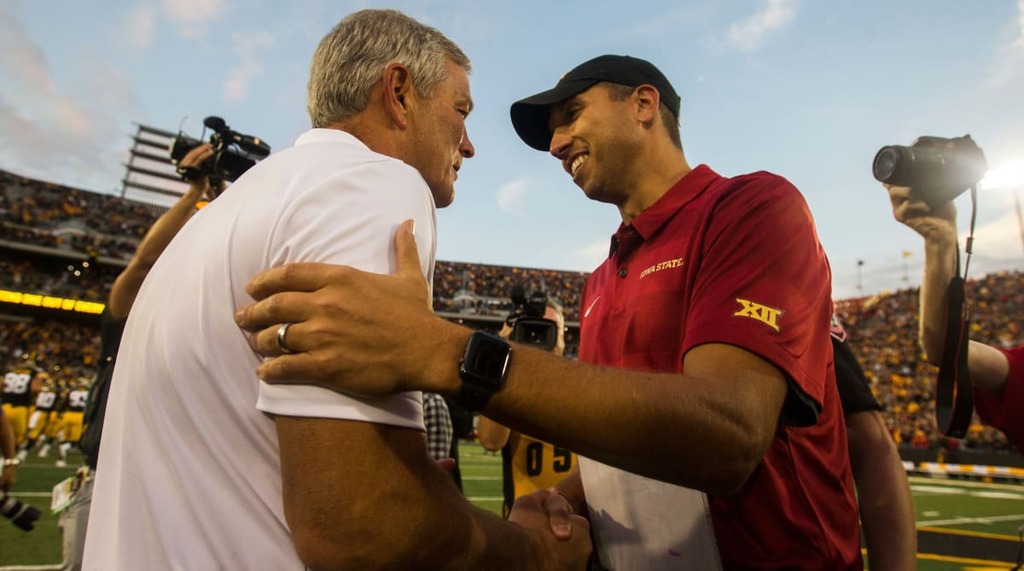 I told Jared DeVries I wanted to talk to him about the Iowa-Iowa State rivalry, and this is what came back through the phone: “I didn’t know there was a rivalry.”

The former Hawkeye and longtime NFL defensive lineman is being facetious—kind of. This is a stance many in the black-and-gold camp have taken over the years: just because the Cyclones say it’s a rivalry doesn’t mean we have to acknowledge it. To Iowa State fans, that attitude is the same disrespectful song they’ve heard for decades, just a different verse.

But this time, there is no avoiding the “R” word, no downplaying this showdown, no use labeling it anything other than what it is: the biggest game in the history of a contentious series. “It’s not even close,” said Mike Hlas, sports columnist for The Gazette in Cedar Rapids, a man who has been writing about these two teams for many years. “You could see this coming two years down the road. People could see that they would be two really good teams. And we’re not used to that.”

Indeed, part of the Iowaness of what they call the “Cy-Hawk” game is its persistent aversion to delivering a truly momentous matchup. That has finally changed. They’re actually good simultaneously. Both teams are not just ranked for the first time when playing each other, they’re both in the AP Top 10 (Iowa State ninth, Iowa 10th). ESPN’s “College GameDay” is coming to Ames. All 61,500 tickets are sold in Jack Trice Stadium, and tens of thousands more fans are expected to converge on Iowa State’s campus just to be around the buzz.

“The parking lot outside the stadium will be like the State Fair,” said former Cyclones and NFL quarterback Sage Rosenfels. They’re playing for all the corn this time. For College Football Playoff hopes, nationwide respect, and for Iowa State rivalry/non-rivalry pride. The ‘Clones have lost five straight in the series to their putative “Big Brother” school.

Hlas’s word to describe the rivalry: hostile. “I know you can say that about most rivalries, but the fan bases really do not care for each other. It’s a week that creates a lot of high anxiety in the state.”

Befitting a good rivalry, those fan bases can be typecast. Iowa tends to get more city and suburban kids—both from within the state and Chicago—whereas Iowa State is the agriculture school. Iowa City is more the classic college town; Ames has a bit less charm.

“Iowa fans say it’s not an important game to them. But I promise you, there’s nothing worse for them than losing to Iowa State. So what does that tell you?”

For the longest time, Iowa didn’t lose to Iowa State. The series record tilts 45–22 in favor of the Hawkeyes. After the first 23 meetings, Iowa held a 16–7 advantage. By that point the rivalry had gotten toxic enough that they stopped scheduling each other, with the last meeting for many decades coming in 1934.

Iowa State won that one in an upset, 31–6. The Des Moines Register noted that the governor of the state was on hand for that game, and that some ISU students wept and others stormed the field to carry the players off on their shoulders. “A lineup of freshmen fought to ring the victory bell west of Central building,” the paper reported. “Relays were organized to keep the bell tolling throughout the night.”

And then that was it for 43 years. The rivalry’s resumption in 1977 started a brief flurry of Iowa State success, winning four out of five. Then Hayden Fry got his program established in Iowa City, and the Hawkeye dominance was never greater.

The Hawkeyes won 15 straight, most of them blowouts. It took one of Fry’s former assistants to stop the streak and make the rivalry more even. Dan McCarney arrived in 1995, and after three ugly losses, Iowa State finally won the Cy-Hawk game again in ’98.

A kid from a small town in Eastern Iowa was on the winning team that day—Rosenfels, from Maquoketa. Rosenfels had just one FBS-level scholarship offer, and it was from McCarney at Iowa State. “It was huge,” Rosenfels said. “For a kid from Iowa, not offered by Iowa, to beat Iowa? Those types of games are legacy games. You want to win so bad.”

A kid from a small town in North Central Iowa was on the losing team—DeVries, from Aplington. DeVries only wanted one FBS-level offer, from Iowa. “We messed that up in ’98,” he said. “I probably have to wear some humility for that. It was a game we expected to win. It’s become extremely competitive and become a rivalry starting with that game.”

Fry retired at the end of that season. He’d been undergoing treatment for prostate cancer, but the program’s slippage—seen most dramatically in that loss to Little Brother—reinforced that it was time for Iowa to move on. In came Kirk Ferentz, and he’s never left. He’s been a consistent winner who made himself happy and comfortable at a place where consistent winning shouldn’t be this easy.

Iowa State, meanwhile, meandered through brief periods of prosperity and long periods of struggle before finally make its home-run hire, Matt Campbell. He’s in his sixth year, turning down interest from elsewhere to painstakingly build the Cyclones into a Big 12 and national contender. “Coach Campbell has taken a page from coach Fry and coach Ferentz’s book,” DeVries said. “He can probably be the head coach at Iowa State as long as he wants to be.”

Campbell has beaten Oklahoma twice. He’s beaten Texas twice. He’s beaten everyone in the Big 12 and won the Fiesta Bowl last season. But he hasn’t yet gotten over on Iowa, losing the last two meetings by the Ferentzian scores of 18–17 and 13–3 (a combined four touchdowns and 22 punts in those slogs).

(Campbell’s only win over Iowa thus far was tweaking the fan base over who could pander harder to farmers. Decades ago, Fry put an “ANF” sticker on the Iowa helmets during the 1980s farm crisis—America Needs Farmers. Iowa State fans responded with their own acronym—AHF, Actually Helping Farmers—and Campbell tweeted an #AHF in the summer of 2017 that riled up some of the Iowa faithful. This was a very Iowa controversy.)

“I’d say Iowa State needs it more, to end this losing streak to Iowa and keep big dreams going,” Hlas said. “It would be big just to not have to listen to it (the crowing of Iowa fans about owning the latest iteration of the series) anymore. They’ve done everything else under Campbell, but this is the great white whale.”

Win or lose, there is concern that the white whale may choose to move out to sea and end the series. Iowa fans have long maintained that playing the game does more for the Cyclones than for their program, and now with the Big Ten, ACC and Pac-12 in a loosely defined scheduling alliance, the Hawkeyes could have a built-in excuse to ditch the game.

“I’ve asked Iowa fans, wouldn’t you rather play a good Iowa State team than Duke or Oregon State?” Hlas said. “A lot of them said no.”

Hopefully this often overheated, occasionally underrated rivalry doesn’t disappear. Especially now that both programs are hot at the same time for once.

“For me, this is less about the rivalry and more a celebration of the state,” Rosenfels said. “To have two teams from Iowa in the Top 10, that’s pretty amazing.”