Too much sweet Pongal not good for cows, say veterinarians 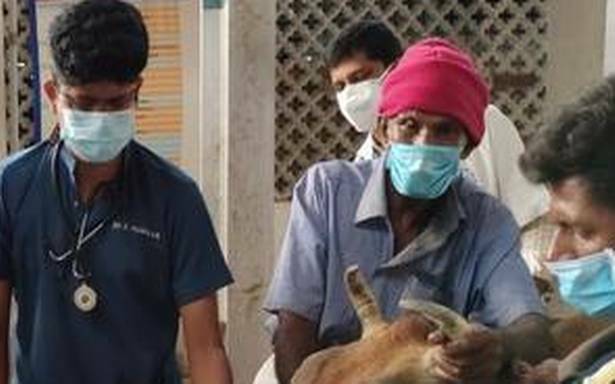 Every year, a day after ‘Maattu Pongal’, the Madras Veterinary College at Vepery would witness a strange phenomenon. Cows, bulls, goats and sheep that appear tired and unable to walk would be brought in by their owners.

“There will be around 20 animals in our college. Veterinary dispensaries in other areas also receive animals with similar symptoms. This means they are extremely sick owing to SARA — Subacute Ruminal Acidosis — and if such animals are not treated immediately, they may die,” said P. Selvaraj, Professor of Medicine, Madras Veterinary College. He explained that Ruminal Acidosis was caused by excessive feeding of Pongal, rice and other sweets on the day of ‘Maattu Pongal’.

“These sugary foods that reach the cow’s stomach get fermented in an abnormal way and cause a health issue in the cows and other ruminant animals; this is called SARA. In severe cases, it is called Ruminal Acidosis. If too much acid is produced owing to excessive sugary items in the stomach, it may even turn fatal,” he said, advising people to feed the animals with hay and ‘agathi keerai’ .

When an animal is brought in for treatment, veterinarians will collect the rumen fluid and examine it for their microbial status. Appropriate treatment will be given based on the cow’s stomach health. But the animal will take days to recover; during the period of recovery, the milk yield will come down drastically.

Festival-related Ruminal Acidosis, however, is mostly found in cattle in urban areas where people cross the limit while feeding the animals with sweet. It is not just the owners but also others who offer food to the animals on the occasion. Cows, bulls, goats and sheep roaming the streets of urban areas fall prey to the culture of feeding sweets on the day of ‘Maattu Pongal’.

Animals become sick because Ruminal Acidosis destroys millions of microbes, consisting of a variety of tiny organisms called protozoa, bacteria and other microbial organisms, that reside in their stomach. These microbes help the cattle digest hay, grass and other feed and enable them to produce the tasty milk, said Dr. Selvaraj.

“Give them the lowest possible amount of sweets and a lot of paddy straw or green fodder. This fodder helps in better digestion and good milk yield. Fodder items provide a substrate for the millions of microbes to act on them and maintain the stomach in very good health. A good stomach is essential for good health,” Dr. Selvaraj said.

He also advised people to avoid feeding cows with leftover food from functions or marriages and low-priced rice.