Too little too late: voters turn on Morrison in affluent seat of Higgins

It’s been almost a week since prime minister Scott Morrison conceded he was a “bit of a bulldozer” and vowed to change the way he behaved if re-elected. But for voters in the marginal seat of Higgins, in Melbourne’s inner east, it’s too little too late.

Alison Baker says Morrison “lacks any integrity or accountability”, citing the sports rorts scandal, his handling of Covid-19 and the sizeable debt in the budget borrowed before the start of the pandemic.

“As soon as the pandemic hit, I thought: here we go, he’s gonna blame it all on the pandemic. But he was in deep shit – to put it bluntly – before then,” she says.

Baker owns a corner shop across the road from Prahran Market, where she sells fresh bread, pastries and sandwiches. This election, she’s placed a sign for Labor’s candidate for Higgins, Dr Michelle Ananda-Rajah, in her store window along with the quote, “compassion is back in fashion”.

“We live in a society not an economy. So yes, I’m a business owner but my concerns are more broadly for society,” she says. “I’m really, really worried what will happen to the country if it’s three more years of this.”

About 2km away, at a cafe on the intersection of High Street and the tree-lined Grandview Grove in Prahran, Simone White and Tam, who live in Malvern, are discussing the election when we approach them.

“Like he said in his own words, he’s a bulldozer. He’s a bully. That’s how I see him,” White says of Morrison.

Tam, who did not want her surname published, says it is “impossible to forgive” Morrison for mismanaging the vaccine rollout and failing to support Victorians, who have endured several Covid-19 lockdowns.

“I saw the premier [Daniel Andrews] say recently that it seemed like the Liberal party thought that they were having a potshot at the Labor party, but they weren’t, they were having a go at Victorians and he’s right,” she said. “I took it personally. It has definitely swayed my vote.”

Both women say they come from families that have traditionally voted for the Liberals but say they can’t support the party at this election. White says she’ll back either Labor or the Greens, while Tam says she’s voting for the Greens – she wants the minor party to hold the balance of power in the lower house.

“Yes, we’re disillusioned but there is also disillusionment among staunch Liberal voters because of the rightwing sort of thing that’s happening in the party. I see a lot of older people saying that it’s not the party they recognise,” she says.

It’s these voters that have Labor strategists convinced it can win Higgins, which stretches from South Yarra in the west to Ashburton and Murrumbeena in the east, taking in the suburbs of Toorak and Malvern.

After Liberal MP Kelly O’Dwyer retired in 2019, the seat became a three-way contest between the Liberals, the Greens and Labor.

Dr Katie Allen managed to retain the seat for the Liberals but her margin slipped to just 3.9%. Following a redistribution ahead of this election, in which Higgins lost part of Glen Iris and all of Hughesdale but gained Windsor, her margin has shrunk further, to 2.6%.

In a sign of how close the contest is, the candidates arrived early on Wednesday morning to the prepoll station at St George’s Anglican Church in Malvern and planned to stay there for much of the day.

The Greens’ candidate, Sonya Semmens, says the redistribution has worked in her party’s favour. Windsor records the highest Greens vote in the state seat of Prahran, which has been held by the Greens since 2014, at 40%, while about half the people who live in the suburb are renters.

Semmens says she understands the current rental crisis from her own personal experience of it. After her marriage ended in 2016, Sonya rented for a few months before being evicted by the landlord, who wanted to renovate. She and her two children were homeless for a period of three months after about a dozen rental applications were rejected.

“My kids have had 10 homes in the last six-and-a-half years. That’s housing, not a home and it’s depressing. When I was a kid, I lived in the same house for 21 years,” Semmens says, before spruiking the Greens’ policy to strengthen renters’ rights and fund tenancy advocacy services.

As for Labor, despite vowing to focus on traditional mortgage-belt seats such as Chisholm after the 2019 loss, the party is again pulling out all the stops in Higgins: an avalanche of election material, targeted social media advertising and guest appearances by the former prime minister Kevin Rudd and Labor frontbenchers Penny Wong, Tanya Plibersek and Claire O’Neil.

Labor candidate Michelle Ananda-Rajah describes the people of the electorate as “self-made or on well on their way”.

“A lot of people have reached a certain point in material wealth where they are thinking about other issues which have been neglected, they want action on things,” she says.

Ananda-Raja cites climate change, intergenerational inequality and the need for a federal integrity commission as the main issues people raise with her, as well as their dislike for Morrison.

“What they have in Scott is a person with no legacy and no agenda for the future and that’s pretty evident. And, they’re sick of the sloganeering,” she says.

“It explains why he hasn’t showed up here for more than 100 days. But you know, I’d love him to come down here. I’d be delighted.”

We’ve come out on top after Covid-19, we’re one of the best economies in the world. What more can you ask for?

Allen concedes Morrison is unpopular among some constituents. She, however, is anything but. Dozens of people recognise her at prepoll and approach her to tell her she has their vote. She even offers to look after Coco Pops, a voter’s dog, while the owner goes to vote for her.

“People say to me, we love what you’re doing and some people are not so happy with the position of the party and they say that to me,” Allen says.

“But they also understand that the party is a broad church and they like the fact that I stand up for my values and I hold firm on them. And they can see how hard I’ve worked through Covid to answer every email, every phone call.”

Allen disagrees with Morrison’s description of himself as a “bulldozer”. She says he needed to be able to make tough decisions during the pandemic.

Tim McCarthy, a “lifelong Liberal voter” agrees. He lives in an aged care facility in Malvern and voted early to ensure Morrison “got [his] vote”.

“I was worried I was going to have a fall or something and couldn’t make it out on election day. I’m not joking!” he says.

McCarthy says Morrison got the country through Covid-19 and there was no need for change.

“He’s done a good job. You can only go by the figures: we’ve come out on top after Covid-19, we’re one of the best economies in the world. What more can you ask for?

“I mean, I would like a nice female friend but what politician can help with that?” 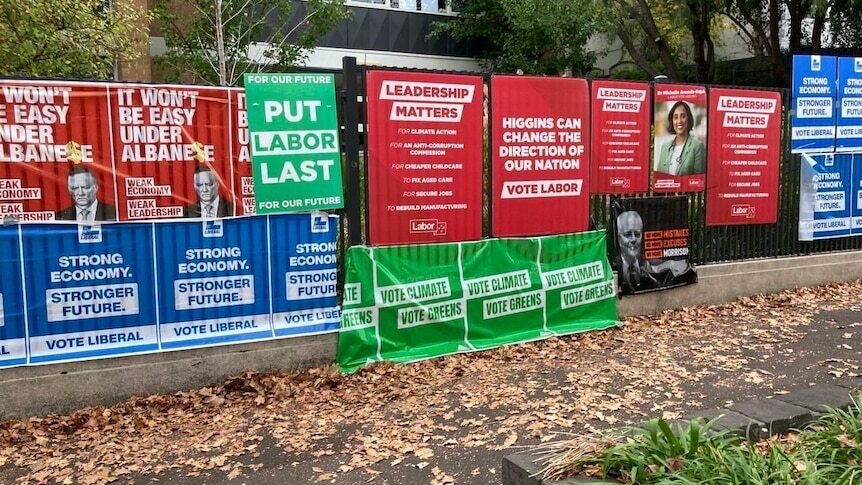 The Guardian - AU
Election day: Morrison accuses UAP supporters of ‘making stuff up’ as Albanese relishes the ‘wind at his back’