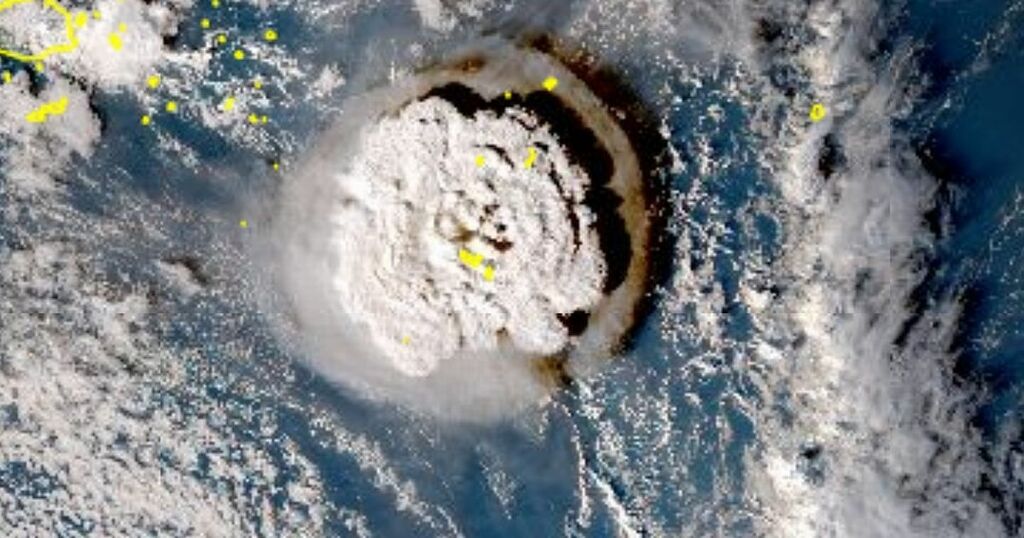 Scared residents said it was dark in parts of Tonga following the eruption, with locals rushing to safety in fear of being swept away by incoming waves.

One woman spoke of how she was preparing dinner for her family when the eruption shook her home, while another revealed he carried his grandmother to the roof of their home in a bid to reach safety.

The eruption of the volcano, located about 40 miles north of Nuku'alofa, triggered a 7.4 magnitude earthquake and caused a 1.2 metre tsunami, Australia's Bureau of Meteorology said.

The Matangi Tonga news site said satellite images showed a three-mile-wide plume of ash, steam and gas rising about 12 miles into the air.

The eruption could be heard thousands of kilometres away and sparked warnings in New Zealand, Fiji, American Samoa and Australia.

Jese Tuisinu, a television reporter at Fiji One, posted a video on Twitter showing large waves washing ashore, with people trying to flee from the oncoming waves in their cars.

"It is literally dark in parts of Tonga and people are rushing to safety following the eruption," he said.

The Tonga Meteorological Services said the tsunami warning was in effect for all of Tonga, while authorities in nearby Fiji also issued a warning, telling people to avoid the shoreline due to strong currents and dangerous waves.

Local media reported that a convoy of police and military troops evacuated Tonga’s King Tupou VI from his palace near the shore as residents headed for higher ground.

There were no immediate reports of injuries, while the extent of the damage caused by the tsunami is unclear.

A meteorologist claimed he'd never seen anything as frightening as the Tonga eruption, with reports of ash 'raining' from the sky, darkness, and 'booming sounds'.

The tsunami threat continues and sea level fluctuations and strong ocean currents pose hazards along beaches in harbours, the tsunami monitor said in a statement.

A tsunami warning had been put in force for all of Tonga said the Tonga Meteorological Services.

The head of Tonga Geological Services, Taaniela Kula, urged people to stay indoors, wear a mask if they were outside and cover rainwater reservoirs and rainwater harvesting systems.

The Pacific Tsunami Warning Centre issued a 'tsunami advisory' for American Samoa, located more than 900km away from Tonga. Residents in American Samoa were told here was a threat of "sea level fluctuations and strong ocean currents that could be a hazard along beaches."

A warning was also issued by authorities in Fiji, telling people to avoid the shoreline due to strong currents and dangerous waves.

Japan Meteorological Agency said there may be a slight swelling of the water along Japanese coasts, but it was not expected to cause any damage.

Earlier, the Matangi Tonga news site reported that scientists observed massive explosions, thunder and lightning near the volcano after it started erupting early on Friday.

Many took to social media following the tsunami, with one saying: "So the loud thud I heard was the volcano erupting in Tonga and not thunder. I live in Fiji. Stay safe Tonga."

One said it was "raining ash and tiny pebbles" with "darkness blanketing the sky."

An expert added: "As a meteorologist, I’ve seen many things on satellite. None as frightening as this Tonga volcanic eruption."

The volcano is about 40 miles north of the Tongan capital Nuku’alofa. In late 2014 and early 2015, a series of eruptions in the area created a small new island and disrupted international air travel to the Pacific archipelago for several days.