The tourists reached 258 for four at stumps after electing to bat first on what looked like a placid pitch in Chittagong at the start of the two-match series.

Mathews put on a key third-wicket 92-run stand with Kusal Mendis, who made 54, to rebuild the Sri Lankan innings after off-spinner Nayeem Hasan removed the openers.

"Somebody had to go big and go long, and on a placid wicket like this, first-innings score is very important," Mathews said of his knock laced with 14 boundaries and one six.

"You can't take anything from the Bangladesh bowlers.They bowled some very good lines and lengths, with a sort of an umbrella field.It was not easy for us to go big."

He kept up the pressure on Bangladesh after Mendis' departure as he put up an unbeaten partnership of 75 for the fifth wicket with Dinesh Chandimal, who was batting on 34.

Nayeem dismissed skipper Dimuth Karunaratne, for nine, and Oshada Fernando, for 36, in the opening session to give Bangladesh some early momentum.

But Mathews and Mendis seized back the initiative and kept Bangladesh bowlers at bay in the entire post-lunch session.

Taijul Islam struck on the first ball after tea break as Mendis fell giving a catch to Nayeem at midwicket.

Bangladesh thought they had Mathews out caught behind for 38 off Taijul after lunch but the decision against the veteran batsman was reversed on review.

The experienced right-hander flicked left-arm pacer Shoriful Islam towards mid-wicket for a four to bring his 12th Test hundred off 183 balls.

Sri Lanka earlier made a confident start as Fernando hit pace bowler Khaled Ahmed for two consecutive fours in the second over.

The introduction of spin, however, halted their progress as Nayeem trapped Karunaratne leg-before on only his fifth ball.

Karunaratne misjudged an arm ball and attempted to cut, but the ball was quicker than he had expected and hit him on the back foot.He was given out and the skipper unsuccessfully reviewed.

Local boy Nayeem, who came into the side after an injury to the stalwart Mehidy Hasan, brought Bangladesh their second success in the session when he took an edge from Fernando in the 22nd over.

Wicketkeeper Liton Das completed the catch as Fernando departed after hitting three fours and one six in his brisk innings.

A minute of silence was observed before the match in memory of Australian cricketer Andrew Symonds, who died in a car crash on Saturday.

The Bangladesh Cricket Board said it was "deeply saddened" at the passing of "one of Australia's greatest allrounders in limited overs cricket".

Neutral umpiring also returned for the first time since the onset of the coronavirus pandemic, with England's Richard Kettleborough officiating alongside Bangladesh's Sharfuddoula. 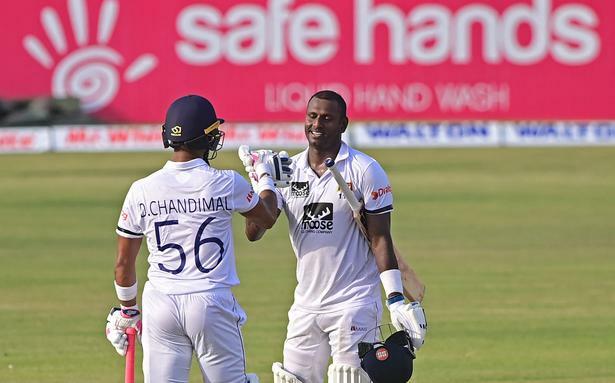 AFP
Mathews closes in on 150 despite Nayeem's double strike