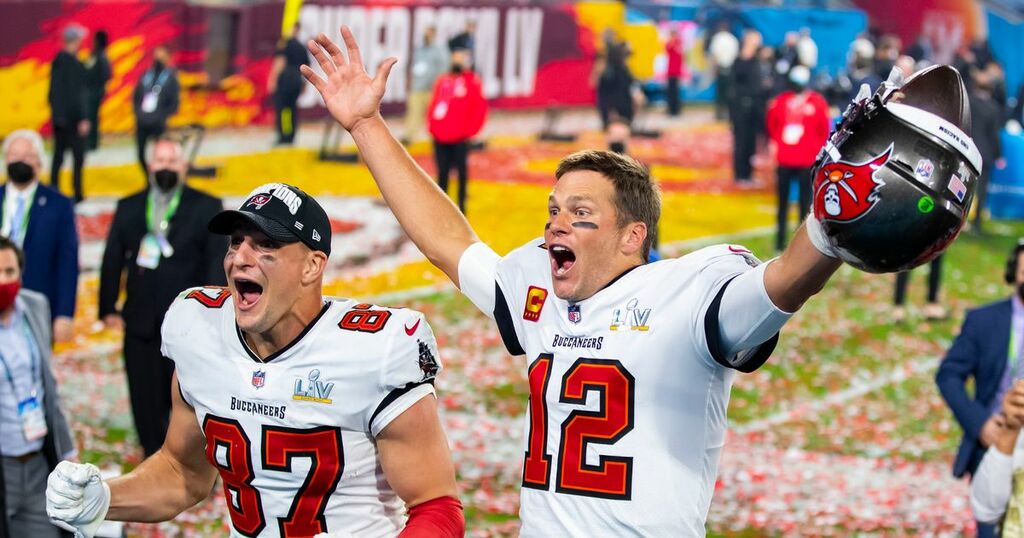 Rob Gronkowski is $1m richer following a win for the Tampa Bay Buchaneers against the Carolina Panthers on Sunday.

The Buccaneers, who won the 2021 Super Bowl, cemented their lead at the top of the NFC South league by prevailing 41-17 at the Raymond James Stadium, but the contest took on a fascinating sub-plot which centred around Gronkowski.

The player dubbed 'Gronk' went into the game on the brink of triggering two separate incentive bonuses, both worth $500,000 each.

His challenges were to take seven catches and 85 receiving yards - and he hit the latter target early in the second half with a 42-yard catch.

However, his chances of doubling his total were hanging by a thread as he remained one catch short with just seven minutes to play, with the home side set to pull out the starters.

However, 44-year-old Brady wasn’t having any of it, refusing to leave the field until his team-mate had secured his pay-day, with CBS footage showing him retrieving his helmet and telling the coaches that he wasn’t coming out of the game.

And sure enough, Brady, a seven-time Super Bowl champion and widely regarded as one of the greatest quarter-backs in the history of the sport, soon secured his friend the prize.

Just moments after his show of defiance, Brady executed a short pass near the sideline which secured Gronkowski his extra bonus, and as if to underline the sole reason why he stayed on, then promptly left the pitch to be replaced by Blaine Gabbert.

Gronkowski meanwhile, who has four Super Bowl wins to his name, would finish the clash with seven receptions for 137 yards, a win with his team, and a cool $1m extra in the bank.

It all meant a welcome end to a tempestuous week for the Buccaneers, following the controversial sacking of Antonio Brown after he took his jersey, shoulder pads, glove, and shirt off and ran into the locker room during their previous game against the New York Jets.

Brown later accused the club of conspiring against him, and 'covering up' his injury problems which he claimed prompted him to stop playing.

Brady later said in a press conference: “We all love him, we care about him deeply, we wanna see him be at his best, unfortunately it won’t be with our team."