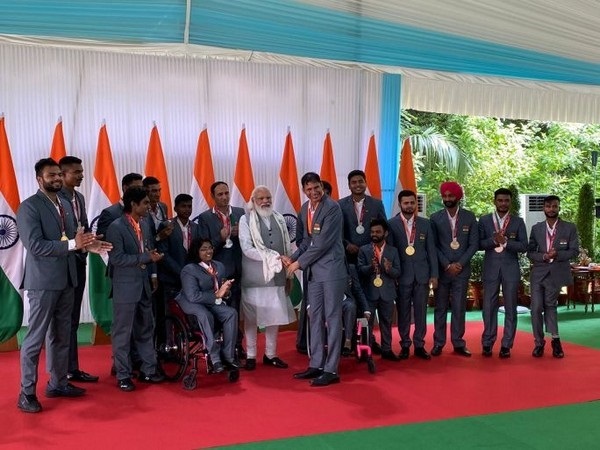 New Delhi: Prime Minister Narendra Modi on Thursday met the Indian contingent that returned with 19 medals from the recently-concluded Tokyo Paralympics. The Prime Minister was seen personally interacting with each member of the contingent and he wished them luck for the future.
The Indian contingent finished their campaign at the Tokyo Paralympic Games 2020 at an all-time high by securing a total of 19 medals which includes 5 gold, 8 silver, and 6 bronze medals.

India sent its biggest ever contingent of 54 para-athletes across as many as 9 sporting disciplines to the Games. Badminton and Taekwondo made their debut in Tokyo, both of which were represented by India. Since making its first appearance at the Paralympics in 1968, India had won 12 medals in total till the 2016 Rio edition. The country has now massively improved upon that entire number by 7 medals at the Tokyo Paralympics 2020 alone. Out of a total of 162 nations, India has finished 24th in the overall medal tally, while its accomplishment of 19 medals is ranked 20th based on the number of medals.
The Gold medalists from the Indian contingent at Tokyo Paralympics were: Avani Lekhara in Women's 10m Air Rifle Standing SH1, Pramod Bhagat in Men's singles SL3 badminton, Krishna Nagar in Men's singles SH6 badminton, Sumit Antil in Men's Javelin Throw F64, and Manish Narwal in Mixed 50m Pistol SH1.