To our Arab-Israeli siblings: Thank you - opinion 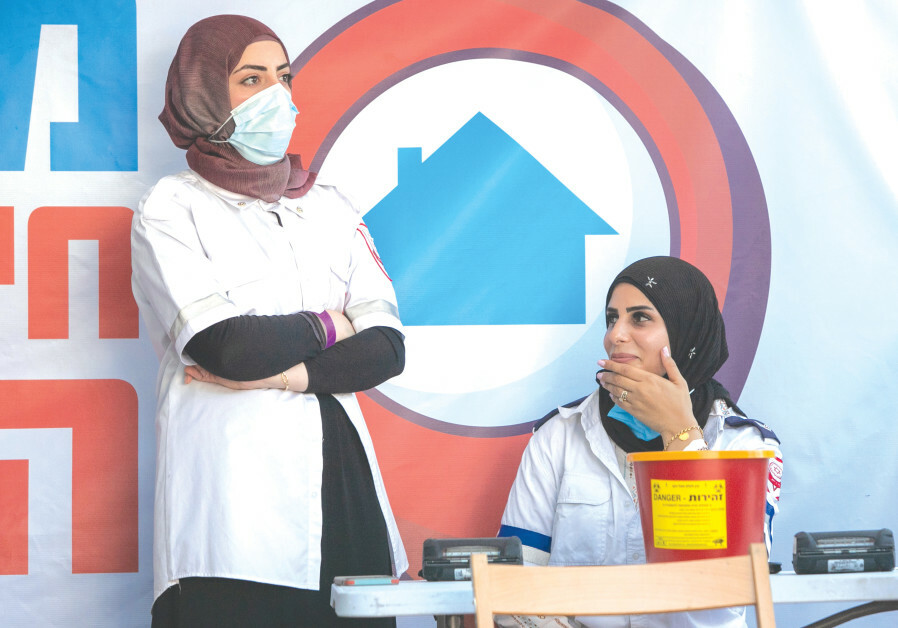 First, apologies for the sweeping headline. I don’t want to treat all Arab-Israelis as one – that’s usually the job of Israel’s left-wing opponents and far-right racists. Both clump all Arabs together to sharpen the Jewish-Arab divide.

Still, allow me to specify.

To those Arab-Israelis who shunned the Palestinian prison-breakers and to those who aided the search for these killers, Shukran! Toda! Thank you!

To those Arab-Israelis from the Ra’am Party and their voters who helped bring an overdue change to Israel’s government and finally stopped treating the Knesset as the Jerusalem branch of the UN or SIB – the Society of Israel-Bashers – instead embracing it as a functional legislature which can help their constituents pragmatically, Shukran! Todah! Thank you!

To those Arab-Israelis who are coronavirus heroes – and more broadly, those who make up 17% of Israel’s doctors, 24% of Israel’s nurses, and 47% of Israel’s pharmacists – proving that the Republic of Medicine trumps any conflict, Shukran! Todah! Thank you!

To those Arab-Israelis who have spent the last year using their Arabic mastery, their cultural fluency and their patriotic vision to bring alive the Abraham Accords by bridging between Jews and Arabs in the UAE, Bahrain and Morocco, Shukran! Todah! Thank you!

To the 466,000 Israeli non-Jews who aren’t Arab-Israelis but are often treated as such by bigodiots – bigoted idiots – and especially to those heroic Bedouin, Druze and Circassians who serve in Israel’s army, including the Druze officer who commanded my son, Shukran! Todah! Thank you!

In short, to most of Israel’s 1.98 million Arabs who are loyal citizens, law-abiding people seeking good, middle-class, lives, Shukran! Todah! Thank you!

CLEARLY, ISRAELI-ARAB identity is multidimensional and sometimes deeply conflicted. In his sadly unappreciated book What is a Palestinian State Worth? Palestinian philosopher Sari Nusseibeh notes that one of Israel’s harshest Arab-Israeli attackers, MK Ahmad Tibi, once bristled when an Al Jazeera reporter asked whether his hometown, Taiba, would join the new Palestinian state he champions. Tibi wants a Palestinian state for others but resented a fellow Arab’s suggestion that he abandon his Israeliness!

Israel’s goal as a multicultural Jewish democracy is not to create a new nation of de-Arabified Arabs or de-Judaized Jews. Israel is an identity wonderland, embracing different identities, not sterilizing them. Yes, Israel administers four education systems for our four domestic tribes – religious Jews, secular Jews, ultra-Orthodox Jews and Arab-Israelis. That respects most people’s democratic desires. True, Israel needs to work harder on a common core curriculum, so all grow up with basic skills and a common language, but most Israelis appreciate the genuine, creative diversity of community, culture and thought resonating throughout Israel.

Irina Nevzlin, who chairs the reopened, renewed Museum of the Jewish People at Beit Hatfutsot, explained this idea effectively in her 2019 book The Impact of Identity: The Power of Knowing Who You Are. In emerging from Communism’s dictatorial, sanitized, antisemitic identity vacuum after the Soviet Union collapsed, she writes, “I realized that strength and resilience come from truly understanding and connecting to what makes you, you.... You are stronger when you know who you are and are connected to your ethnic heritage.”

Our Identity Wonderland is not Disneyland. Scars of the May riots in Lod, Acre and elsewhere remain visible – and hidden. But this new government can build on the positive, especially if it lowers crime, eases Arabs’ building-permit process, and continues the educational and employment progress the Likud facilitated, too, while treating every Israeli citizen respectfully.

Arab-Israelis are not the Holy Land’s only identity-jugglers. Saturday night, having finished praying in my Ashka-sephard, Sabra-oleh, neighborhood minyan, I attended an enchanting open-air concert. David D’Or, a descendant of Libyan Jews, sang at the (Ottoman) Sultan’s Pool with Avraham Tal of Algerian-Moroccan descent, Amir Benayoun of Moroccan descent, Idan Amedi of Kurdish descent, and Ehud Banai, a multigenerational Jerusalemite of Persian descent. This chorus of bare heads, baseball caps and various-sized kippot – who range politically from Left to Right – belted out traditional slihot, penitential prayers.

This was the real Israel, not the Israel of the political punchline, the toxic tweet or the simplistic slogan. It’s a complex, dimensional Israel. Here, people live brilliant diamond-like identities, integrating their Jewish or Arab and democratic, immigrant/ethnic-origin, Zionist, traditionalist, and very Israeli selves in rich and surprising ways.

Under Jerusalem’s stars, flanked by the Old City’s walls, these musical identity-magicians transformed partisans’ “vs”s into “ands.” The crowd was religious and nonreligious – not versus; Mizrachi and Ashkenazi – not versus. The songs created an old-young identity symphony, with traditional words set to modern melodies, modern songs echoing traditional tropes, and super-hip Israelis singing ancient prayers – with the entire audience joining.

This year, may we continue turning “vs”s into “ands” – with our Arab brothers and sisters, too.

The writer is a distinguished scholar of North American history at McGill University and the author of nine books on American history and three on Zionism. His book Never Alone: Prison, Politics and My People, coauthored with Natan Sharansky, was published by PublicAffairs of Hachette.