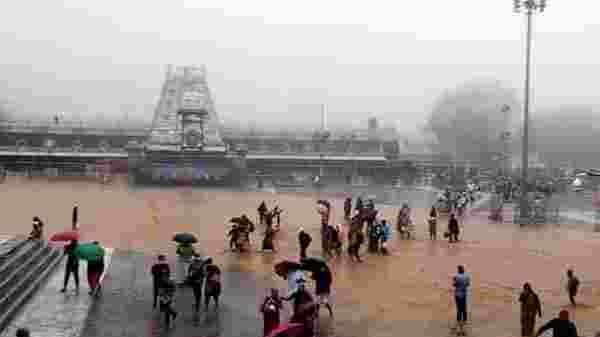 Tirupati, the abode of Lord Venkateswara witnessed a severe flood, leaving hundreds of pilgrims stranded on Friday. Darshan of God was virtually stalled as pilgrims could not go out because of the inundation. The Japali Anjaneya Swamy temple on Tirumala was inundated and idol of the God submerged. The four ‘maada streets’ adjoining the main temple on Tirumala Hills also remained flooded. Besides, the two ghat roads leading to the Tirumala Hills were closed for traffic following the flood and landslides. The pedestrian stairway leading to the temple from Alipiri was also closed down.

A landslide damaged three rooms at the Narayanagiri guest house complex but nothing untoward has been reported as the rooms were unoccupied.

Pilgrims staying in other rooms in Narayanagiri and nearby S V guest house were shifted to other accommodation. In Srinivasa Mangapuram near Tirupati, two autos were washed away as the Swarnamukhi rivulet remained in spate. A bridge on the Renigunta-Kadapa highway remained in a precarious position at Anjaneyapuram. A truck was stranded on the bridge, causing a traffic jam on either side, even as police reached the spot for a rescue operation.

The Tirupati International Airport at Renigunta remained flooded with water, forcing the authorities to stop the landing of incoming aircraft.  Two passenger flights scheduled to land in Tirupati from Hyderabad and Bengaluru were asked to return, according to airport director S Suresh. A scheduled flight from New Delhi has been cancelled due to the prevailing weather condition, he added.

The Southern Railway partially cancelled and diverted trains to Tirupati due to the rising water level near a bridge between Tada and Sullurpet due to heavy rainfall.