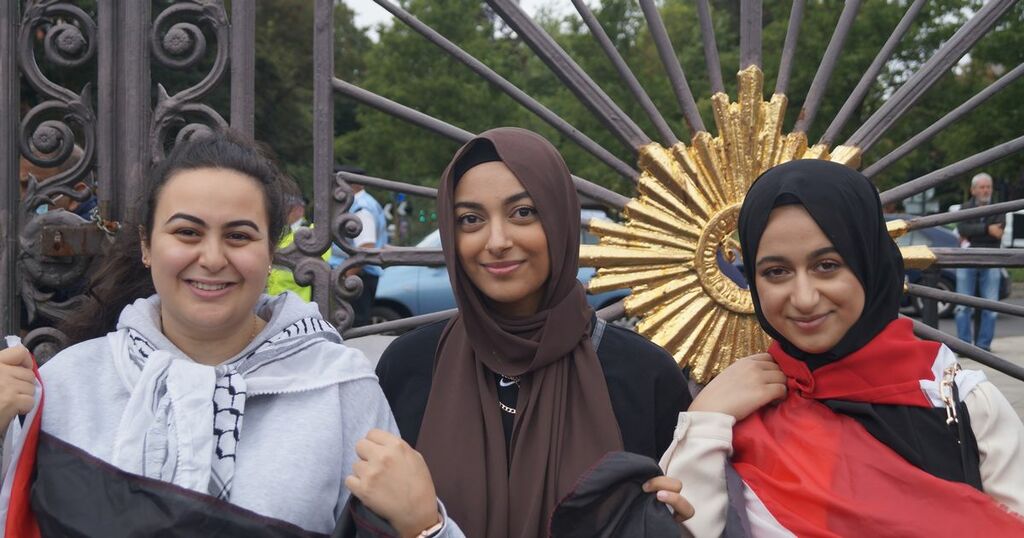 Three women born and raised in Liverpool spoke of their pain at not being able to see family from the war-torn countries of their parents' birth.

Haneen Awaad and Haifa Alkhanshali gave speeches while Sarak Ashaikh read poetry at a protest of hundreds led by Jeremy Corbyn against a planned arms fair on Saturday, September 12.

Some exhibitors at the AOC Europe electronic warfare exhibition, due to be held at Liverpool's Arena and Convention Centre next month have faced claims over the sale of equipment to the militaries and security forces of countries accused of serious human rights abuses.

Haneen, 24, is a Palestinian Scouser from Anfield. Her dad left Palestine due to war when he was 13. Her grandmother also left the country after her husband died in a car accident.

She told the ECHO : "She had to leave in the dead of night, barefoot with children under 10, and walk from Palestine to Jordan. Since that day, she's never got to go home and see her house. She died in Liverpool.

"So what we do, activism, I honestly do it for my grandma. I owe it to her. And it's so emotional when I did go back because I would have loved her to be with me, to show me around the house.

"But it's my dad trying to pick and choose the memories that he wants to remember, because he was terrified when he went. You know, the trauma he'd have got as a kid and to go with 40 years on. It sparks anxiety, doesn't it?"

For Sarah Ashaikh, a Syrian poet from Liverpool, visiting and speaking to family means navigating numerous countries and time zones.

Sarah told the ECHO : "I've witnessed, not first hand, but my mum, with her family members and her relatives, you know, they've lost their lives and they've had to flee to different countries.

"My relatives are now scattered all over the world. They're refugees in all these different countries. We've got Turkey, Sudan, Germany, England.

"It does make it really difficult. We have to find different methods of communication with each country. Every country is different. And in terms of the ones in Syria, the communication is difficult. It's inconsistent."

Sarah has never been to Syria. The war that broke out in 2011 and continues to this day scuppered plans to visit.

"It's like a part of me, but it's somewhere that I won't be able to visit for a long time."

It's been almost a decade since Haifa Alkhanshali, 23, last visited family in Yemen.

Millions face starvation and displacement in the country due to war between Houthi rebels and a Saudi Arabia-led coalition.

Haifa told the ECHO : "It's extremely extremely difficult. I know my uncle a few months ago went, and he had to travel to two different countries and then go to Aden, and then get a six hour coach just to get to the capital."

The Liverpool John Moores University graduate from Childwall added: "It's quite hard to be honest because we haven't seen our family in a while, especially my mum.

"All her family is in Yemen. So it's really difficult seeing as we haven't been in nearly 10 years."

Liverpool is home to these three women, but there is also another home that each of them feels separated from.

Sarah's is a place she may never see. Haifa's is a country where she's immersed in her family and her culture.

Haneen's is a journey across a border and through checkpoints that opens her eyes, and that is both 'stressful and 'rewarding'.

Speaking of Palestine, she told the ECHO : "It's not all what you see on the TV. I was expecting tanks in the street and rockets flying left, right and centre.

"Unless there's something going on, it's pretty much peaceful, especially in the West Bank where I am. People just go on doing their day-to-day lives, and I was quite taken aback and quite shocked by that.

"Because there are nightclubs, there are shisha lounges, weddings, parties. Everything is like normal. But you have to carry on with normality in the back of your head, and expect the worst."

At home in Liverpool, they feel the need to speak up for people in their other homes of Syria, Yemen and Palestine.

Sarah said: "The oppressed need a voice, and it's our responsibility in these countries where we have freedom of speech to give them that voice. Especially in Syria, Palestine, Yemen, all these countries."

That sense of responsibility is shared by Haifa, a member of Liverpool's long-established Yemeni community, who advocates for people in Yemen who don't have family here to help them.

Haifa told the ECHO : "For me, I've got family there, so it gives me a sense of responsibility, because I'm Yemeni. And I know, not just my family, but there are other families that don't have anyone here that can help them.

"Obviously we have been trying to help our family back home as much as we can by donating anything we can. But I know there are families there that don't have anyone.

"So I feel like because I'm here and I'm Yemeni, I need to help them. I can't let them down. How can I forget my own country, my own culture?"

A spokesperson for AOC Europe told the ECHO: "Throughout its 25-year history, AOC Europe has connected organisations and individuals from Government, defence, industry and academia to promote the exchange of information and review the latest advances in electromagnetic and information-related fields.

"The event will explore aspects and display equipment related to the information security and communications domain such as Cyber Electromagnetic Activities (CEMA), Information Operations (IO), and other information-related capabilities.

"AOC Europe provides an opportunity for attendees to exchange ideas, develop relationships, and showcase a range of high tech electronics – a field in which the UK is an acknowledged world leader.

"AOC Europe serves only the legitimate defence and security industry, which is the most highly and tightly regulated in the world.

"We work in close partnership with the UK Government, and all visitors to our events are vetted and undergo the strictest scrutiny before being allowed access.

"Exhibitors are contractually required to ensure that equipment, services, promotional material, documentation and anything else on display and online complies with domestic and international law.

"If any companies are found to be exhibiting anything that contravenes this policy, then robust and appropriate action is taken."