It's been 13 weeks since Russia launched its invasion of Ukraine.

The United Nations reported that almost 4,000 Ukrainian civilians have been killed in the war so far, but Kyiv believes the number of dead to be in the tens of thousands.

Ukrainian President Volodymyr Zelenskyy said Russia had launched 2,275 missiles and 3,000 aerial strikes against his country since the start of the war.

This week, Ukraine also estimated that more than 29,000 Russians have died in the fighting to date.

And, as a result of the invasion, the number of Ukrainians who have fled to Europe as refugees reached 6.5 million.

Here are some key events that happened in the war between Russia and Ukraine this week.

Last Saturday, Russia claimed to have seized full control of the port city of Mariupol after a nearly three-month siege that reduced much of the city to a smoking ruin.

The Azovstal steelworks was were Ukraine made its final stand.

A dwindling group of outgunned fighters had held out in the plant, drawing Russian air strikes, artillery and tank fire before the Ukrainian government ordered them to abandon the site's defence and save their lives.

On Tuesday, workers in Mariupol said they had found more than 200 bodies buried in the basement of a high-rise building.

The dead are presumed to be civilians who were sheltering in the basement when the building was bombed by Russian forces.

Russia had sought control of Mariupol, on the coast of the Sea of Azov, to complete a land corridor to the Crimean Peninsula, which it annexed from Ukraine in 2014.

The city's residents have endured some of the worst suffering of the war.

An estimated 100,000 people, from a pre-war population of 450,000, remain there. Many are trapped without food, water, heat or electricity.

On Monday, Ukraine sentenced the first Russian soldier convicted of war crimes to life in prison.

Tank commander Vadim Shishimarin, 21, was found guilty of shooting to death 62-year-old Oleksandr Shelipov in the village of Chupakivkha four days into the invasion.

On Thursday, the second war crimes trial to be held in Ukraine began.

The two captured Russian soldiers who were on trial pleaded guilty to shelling a town in eastern Ukraine.

Alexander Bobikin and Alexander Ivanov acknowledged being part of an artillery unit that fired at targets in the Kharkiv region from the Belgorod region in Russia.

The shelling destroyed an educational building in the town of Derhachi, the prosecutors said.

Described as an artillery driver and a gunner, the soldiers were captured after crossing the border and continuing the shelling, the prosecutor-general's office said.

State prosecutors sought a sentence of 12 years. A verdict is expected on May 31.

Ukraine's parliament banned the symbols Z and V, which are used by Russia's military to promote its war in Ukraine.

Neither of the two letters exists in the Russian alphabet, but they have been widely used, particularly on Russian military vehicles and equipment, to promote the aims of the conflict.

Yaroslav Zheleznyak, an opposition member, announced the decision on the Telegram messaging app.

The bill does allow for the two symbols to be displayed in museums, libraries, scientific works, re-enactments, textbooks and similar instances.

On Thursday, the ABC released an analysis of satellite data that revealed the devastating impact of the Russian army's brutal tactics on some of Ukraine's largest cities.

Building damage reports by the UN Satellite Centre showed that more than a fifth of the buildings surveyed across the towns of Bucha, Irpin, Vorzel and Hostomel, sustained visible damage.

In Mariupol, at least half of the buildings have been damaged or destroyed, with some estimates putting the total damage closer to 95 per cent.

An ABC News analysis of satellite imagery from April 3 revealed visible damage to almost every building in Mariupol's city centre.

It's a tactic that has been used by Russia many times before: in World War ll, in Chechnya in the 1990s and, most recently, in Syria, where huge areas of cities such as Aleppo were wiped out. 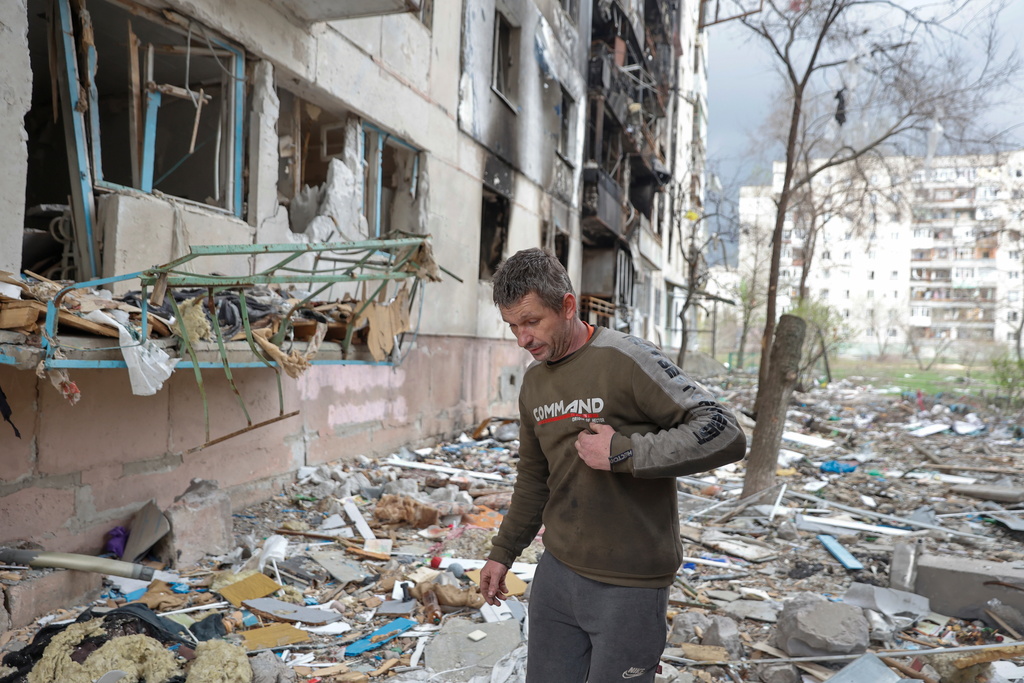 Russia said Saturday that its troops and separatist fighters had captured a key railway junction in eastern Ukraine, the second…