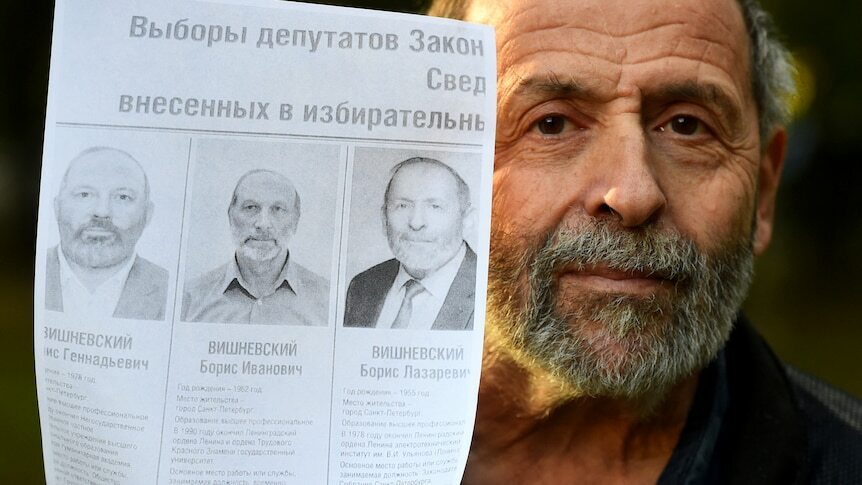 Expect to see some double-takes when Russian voters head to the polls in Saint Petersburg later this month.

Three candidates all have the same name and look eerily alike.

Boris Vishnevsky, a well-known opposition politician running for re-election to the regional parliament, will compete against two others also named "Boris Vishnevsky" and who, like him, are balding and sport a short salt-and-pepper beard.

But this is no coincidence. It's an election-muddling tactic commonly seen in Russia where 'identical' candidates appear on the ballot to disperse votes for popular politicians.

"This is political fraud," said Mr Vishnevsky, a 65-year-old senior member of the liberal Yabloko party.

"These people run in the polls not to get elected or present their political program but to confuse voters.

Mr Vishnevsky is running for election to the state's parliament, or Duma.

Nearly all vocal Kremlin critics are barred from running.

Mr Vishnevsky said he stunned when he was confronted with a mock-up of an official election poster featuring nearly identical photos of him and two other Boris Vishnevskys side by side.

He said he knew one of his namesakes -- Viktor Bykov, a member of the ruling United Russia party.

"Before he became a "Boris Vishnevsky" he looked different — without a beard," he said.

Mr Vishnevsky said he didn't know why the men were running against him.

But he told the Guardian: "I don't think they agreed to embarrass themselves like this for free."

It reported that the third "Boris", Alexei Shmelev, also changed his name ahead of the polls.

Neither of the alleged spoiler candidates could be reached for comment.

Mr Vishnevsky has filed an official complaint, urging Russia's Central Election Commission to look into the matter and saying the official pictures of his rivals have been photoshopped.

Earlier official pictures of one of Mr Vishnevsky's doppelgängers, Mr Bykov, show a much younger man with few signs of a receding hairline.

"I believe that there is manipulation whose only goal is to distort the will of voters," Mr Vishnevsky wrote in his appeal.

Ella Pamfilova, the head of the Central Election Commission, called the situation "a disgrace" and "a mockery of voters", but suggested little could be done.

Election laws in Russia are "very liberal" and all candidates named Boris Vishnevsky can run in the polls, she said.

United Russia is polling at less than 30 per cent ahead of the election, according to state-run pollster VTsIOM.

Russian authorities have been waging a crackdown on the opposition and independent media, jailing President Vladimir Putin's top domestic critic Alexei Navalny in February and later outlawing his organisations.