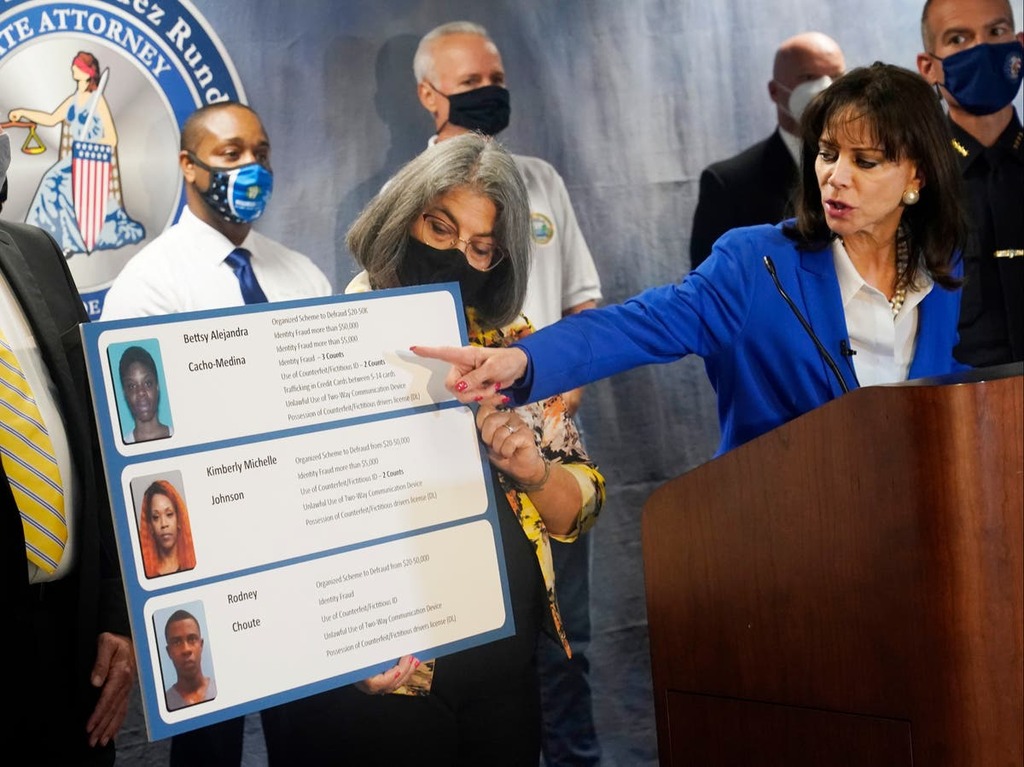 Three people have been arrested for allegedly stealing the identities of seven victims of the Surfside condo collapse in Florida.

They are charged with identity theft and schemes to defraud.

Calling the group “cyber grave robbers,” the state attorney said they took advantage of the situation, the victims, and their families as they were experiencing “absolute emotional turmoil”.

“Their motto could have been ‘Your losses, our gain,’” she said.

The three individuals were still in jail early on Thursday, according to The Washington Post. It’s unclear if they have lawyers.

In July, Nicole Ortiz told WPLG that she noticed email notifications when she looked through her sister’s iPad as she was writing her eulogy. Ana Ortiz died following the condo collapse on 24 June.

Nicole Ortiz said she saw emails about changes to her sister’s credit cards, addresses were being changed and money transfers made.

“They started changing all of the bank accounts,” she said. The day after her sister’s funeral, Nicole reported the concerning online activity to the Surfside Police Department.

After an investigation that lasted weeks and included both local police departments and federal agencies, authorities now say that at least three people have stolen the identities of seven victims of the Champlain Towers South collapse – five of whom died.

A total of $45,000 was stolen and used to buy designer handbags, shoes, and other expensive merchandise, according to police.

Ms Cacho Medina is referred to as the lead suspect by authorities, who say that in the days after the collapse in which 98 people died, she called Barclays Bank and pretended to be Ana Ortiz and asked that a new credit card be sent to a new address.

An audio recording of the call with the bank was played at the press briefing.

“I was a victim of the towers that just collapsed, the Surfside, and all my belongings were in there,” Ms Cacho Medina told an employee at the bank.

“Oh, my gosh. Sorry about that,” the employee said.

Later that same day, the bank told the Aventura Police Department about the conversation.

The group of “cyber grave robbers” reportedly also used Ana Ortiz’s credit card at Christian Louboutin and Versace stores in Miami. According to officials, Ms Cacho Medina bought a Versace handbag for more than $1,600. She was later seen holding the bag in surveillance footage from Bloomingdale’s. She’s accused of spending another $2,500 at the store.

Ms Cacho Medina was seen driving a Mercedes in a mall parking lot. Law enforcement officials connected the addresses for the fresh credit card to the registered address for the vehicle.

The group of victims include Frankie Kleiman, the husband of Ana Ortiz, and Gladys and Antonio Lozano, who were residents of the condo building. They all died following the collapse of the tower.

The other three victims of the crimes have not been identified by officials.

Sergio Lozano, who had eaten dinner with his parents in the hours leading up to the collapse, told WFOR that the alleged theft started the day after his parents’ wake, on 3 July.

He saw transfers using Zelle, as well as a new online bank account in his mother’s name. A request for fresh debit cards had also been made.

“I don’t find a more despicable crime than stealing from the dead,” Mr Lozano said.

Ms Fernandez Rundle added that the investigation continues and others could be arrested in the near future.

“Our community has been shaken at the horror that we’ve seen with the collapse of the Chaplain Tower South condominium and now we’re also further aggravated and shocked by those who would use this tragedy … to enrich themselves,” she said. “But we will not let any of those involved in these crimes get away with them.”