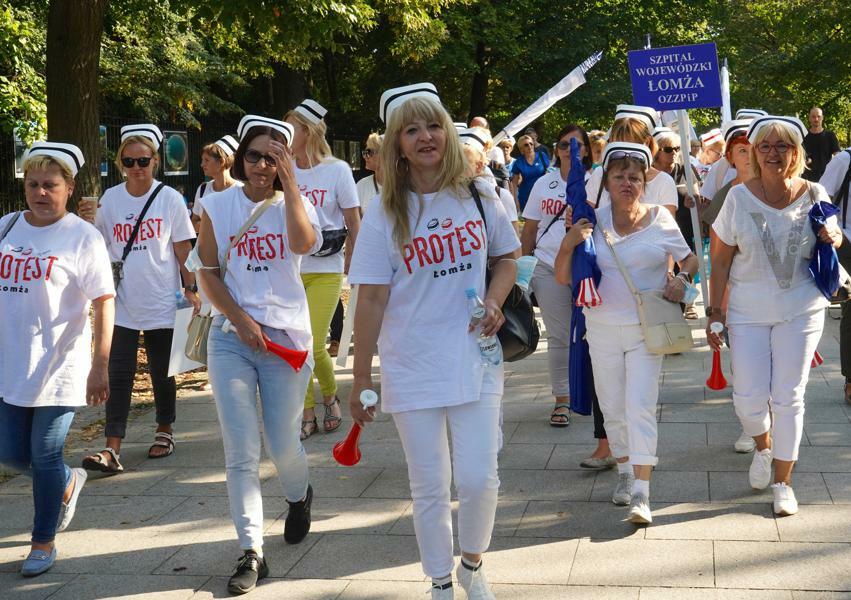 Around 30,000 healthcare workers marched in Warsaw on Saturday to demand higher wages and better working conditions as the fourth coronavirus wave gathers pace in Poland.

The protesters, which included nurses, doctors, paramedics, physiotherapists, lab technicians and other medical professionals, criticized the government for putting the safety of patients at risk by underfunding the healthcare system.

Talks between unions and the Health Minister Adam Niedzielski broke down on Friday after the ministry dismissed their demands as “theatrics” and said that Prime Minister Mateusz Morawiecki would not attend the meeting.

The protesting medical workers want the government to increase expenditure on healthcare to 8% of GDP instead of the 6% planned for 2022. They also demand pay raises to average OECD levels relative to national wages, and an increase in the number of employees in the healthcare system, including the creation of more administrative jobs to ease a bureaucratic burden on doctors and nurses.

The protesters held a minute’s silence outside the presidential palace in memory of the 500 medics who died during the pandemic. They said they believed that inadequate working conditions and staffing shortages contributed to their deaths.

At the end of the march, participants set up a so-called “white town” of tents to continue the protest, offer press conferences and provide free medical consultations to members of the public.

The government has refused to meet the demands, saying they can be implemented “in few years’ time, not in a year or two”. Announcements of pay raises for certain groups of medical workers were criticized by the protesters who said the health ministry was trying to sow seeds of division and break up the strike.

Poland has one of the lowest levels of funding for healthcare in Europe. The number of practising doctors in relation to the population was 2.4 per 1000 inhabitants in 2020, one of the lowest rates among OECD countries, and well below the EU average of 3.8.

According to the Supreme Council of Nurses and Midwives, the average age of practising nurses and midwives in Poland is 53 and 51, respectively. Many of the newly qualified nurses choose to work in the private sector where conditions tend to be better, or move abroad.

Poland’s public healthcare workers have staged a number of protests over pay and conditions in the last few years.

Earlier this month, over half of Warsaw’s ambulance crews went on strike, leading the government to call in air rescue to fill the gaps in service. Across the country, scores of paramedics have quit their jobs in protest against low pay and long working hours.

During the first quarter of 2021, a record number of doctors applied to leave Poland, according to data provided by the country’s Supreme Medical Council. Poland faces a shortage of between 20,000 and 50,000 physicians.

The protests have been taking place against a backdrop of a fourth wave of coronavirus infections. The country reported 530 new cases today, and the number has been increasing by 40% every week.