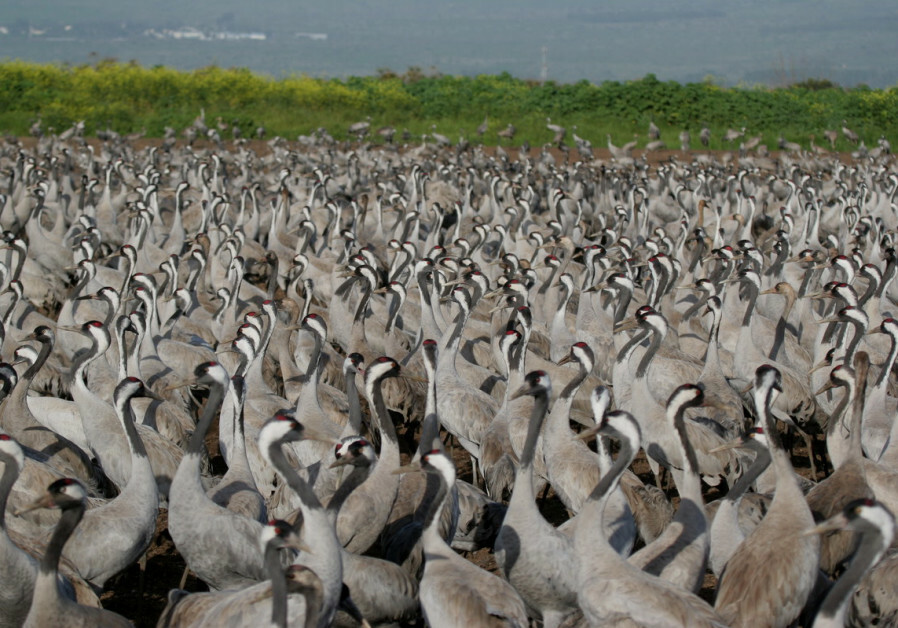 Crane migration season has officially begun after nearly 11,000 common cranes were spotted at the Hula Valley in Israel's North.

The spot is important for these feathered guests, as they need to eat and rest before they fly across the desert in the South, as noted by Keren Kayemeth LeIsrael-Jewish National Fund (KKL-JNF) head birdkeeper Yaron Cherka.

Around 100,000 common cranes come to Israel every year from Russia and eastern Scandinavia, with about 40,000 of them staying for the winter, according to the Society for the Protection of Nature in Israel (SPNI).

The birds that don't stay for winter head south to Africa, usually south of the equator.

In the summer, however, the cranes have their nesting season, and many more begin to appear in Israel during October after the summer ends.

These birds are famous for their migration patterns and can be found as far away as East Asia, India and East Africa, across Siberia and Central Asia and in parts of Europe — including such far-flung places as the Iberian Peninsula and Ireland.

Due to this, they have been known to humans throughout history, have fascinated mankind for thousands of years.

"The cranes appear in Norse and Asian legends and folklore, and some places like Japan give the crane great cultural importance," SPNI senior birder Jonathan Meirav explained. Indeed, the common crane was held in ancient Greece to be the sacred bird of the god Haephestus, and holds cultural significance in Japan and Ireland. There is even an entire museum in Germany, the Kranich Museum, dedicated exclusively to art relating to cranes.

Part of this range of cultural influence can be attributed to their widespread migrations. "The cranes are strong migrators, and can migrate day and night," Meirav added.

The cranes are not just known for their distinctive appearance, though. The birds are also known to possess a very loud call. This loud trumpeting sound has been described as "piercing," being able to be heard from very far away. During the breeding season, this call will usually be accompanied by a distinctive dance. Outside breeding season, though, the deep call can still be heard during flight.

In addition, common cranes also fly in "families" for many years, with parents and their hatchlings migrating together — something unusual in the bird world.

This migratory season will last from mid-October into November, but many more stay between November and March. These cranes can likely be seen and heard throughout Israel, and some are concentrated in the Jezreel Valley and the western Negev. But the vast majority of the birds in Israel can be seen in the Hula Valley, specifically by KKL-JNF's Hula Lake Park – which is the best place to see them.

The Hula Valley is one of the major points in Israel where migratory birds stop over, and the Hula Lake Park is one of the country's most popular birdwatching sites.

Twice a year, over 500 million birds, from more than 400 species, pass through the area of the Hula Lake Park as they migrate from Europe to Africa and back.

Around April, huge numbers of birds flock to Eilat for their migration as well.

Moran Snir contributed to this report.