The Marvel Cinematic Universe is rolling on towards its 30th film, which will be Black Panther: Wakanda Forever, due in November.

But the cinematic universe's landscape has been very different since the end of Endgame, with recent films digging into comic books and previous films to find familiar and fan favourite faces to spice up the super-powered shenanigans.

The cameos are now as big of a deal as the end credits scenes, hinting at entire multiverses of creative opportunities for the cinematic universe's brains trust.

But director Taika Waititi likes to do things differently, and the cameos in his latest film Thor: Love and Thunder are a very Taika mix of oddities, old friends, and oh-my-god moments.

Read on if you dare, but be warned — here be spoilers.

The Guardians of the Galaxy

No surprise here for anyone who had been paying attention (or who saw the trailer).

At the end of Avengers: Endgame, which was the last time we saw Thor, he was flying off into the intergalactic sunset as an unofficial member of the Guardians of the Galaxy, who all turn up here for a "classic Thor adventure".

The team will also return for Guardians of the Galaxy Volume 3 in May, 2023.

Following on from their hilarious cameos in Thor: Ragnarok, Damon, Neill and Chris Hemsworth's older brother Luke return to do exactly what they did in Ragnarok — be actors.

Playing the roles of Loki, Odin and Thor respectively, the trio are used by Waititi as the terrible stars in an amateur production of one of Thor's classic adventures, serving as not only a funny joke, but a clever way to recap the events of previous films.

Damon, Neill and Luke Hemsworth are joined this time by Melissa McCarthy in the role of Hela, who was played with devilish delight by Cate Blanchett in Thor: Ragnarok.

A far less fear-inspiring Hela, McCarthy gets to share her jokey cameo with her husband Ben Falcone, who has a blink-and-you'll-miss-it role as the stage manager of the terrible production in which McCarthy and company star.

Waititi killed off most of Thor's treasured companions in Ragnarok, though we see glimpses of Hogun, Vostagg and Fandril in flashback.

The only survivor is Lady Sif, played by Jaimie Alexander, making her sixth appearance in the Marvel Cinematic Universe (that's three films and three TV series, though I'm not spoiling which ones in case you haven't seen them all).

Super nerdy sidenote: Lady Sif suffers a fate in Love and Thunder that also befalls Thor in the Thor/Mighty Thor comics which inspired this film.

The biggest surprise is Idris Elba's return as Heimdall, which just goes to show that being dead doesn't stop characters from coming back in the Marvel Cinematic Universe.

Given that Stan Lee pinched Thor, Odin, Loki and co from Norse Mythology, it shouldn't surprise you that he appropriated gods from other pantheons to fill out is comic book universe.

Zeus is the main one here, played by a dodgily accented Russell Crowe (who appears to be having a ball) but eagle-eyed fans will spot various Greek, Aztec, and Egyptian deities, and then some.

You may have to wait for the streaming release so you can pause it and get a good look and who's there, and who's playing them.

Chris's brother Luke isn't the only member of the Hemsworth family who pops up in Love & Thunder.

Cameoing as a wolf woman in a flashback of Thor's conquests is Chris Hemsworth's wife Elsa Pataky, who starred in Matthew Reilly's recent Netflix adventure Interceptor.

While Pataky's role is little more than a kiss with her husband, their 10-year-old daughter India Rose Hemsworth has a much bigger part in the film, starring as Love, the daughter of villain Gorr (played by Christian Bale).

This is a deep dive, so hold on to your hats.

During the making of Thor: Ragnarok, Waititi and Hemsworth made a couple of short mockumentaries aimed at showing what Thor was up to during the events of Captain America: Civil War, and to introduce the new comedic tone they intended to bring to the series.

In the short films, Thor is shown living with an Australian housemate named Darryl, who helps Thor send emails to his fellow Avengers and argues with him about the household chores.

Darryl makes his triumphant return to the Marvel Cinematic Universe as an Asgardian tour guide, played once again by Daley Pearson, who is one of the brains behind hit ABC Kids show Bluey, serving as executive producer on the program and voicing Bandit's friend Rocko.

The credits scenes of some recent Marvel Cinematic Universe movies have served as soft introductions to new characters.

We had Clea (played by Charlize Theron) in Doctor Strange and the Multiverse of Madness, and Eros (Harry Styles) in The Eternals.

Now we have Hercules, played by Ted Lasso star Brett Goldstein — yet another deity pinched from mythology and thrown into comic books by Stan Lee.

Hercules' history with Marvel goes back to 1964, and since then he's been a semi-regular member of the Avengers, as well as part of a short-lived team called The Champions alongside Black Widow, Ghost Rider, Iceman and Angel.

He's also had his share of run-ins with Thor, which seems to be the direction the end credits scene is pointing. 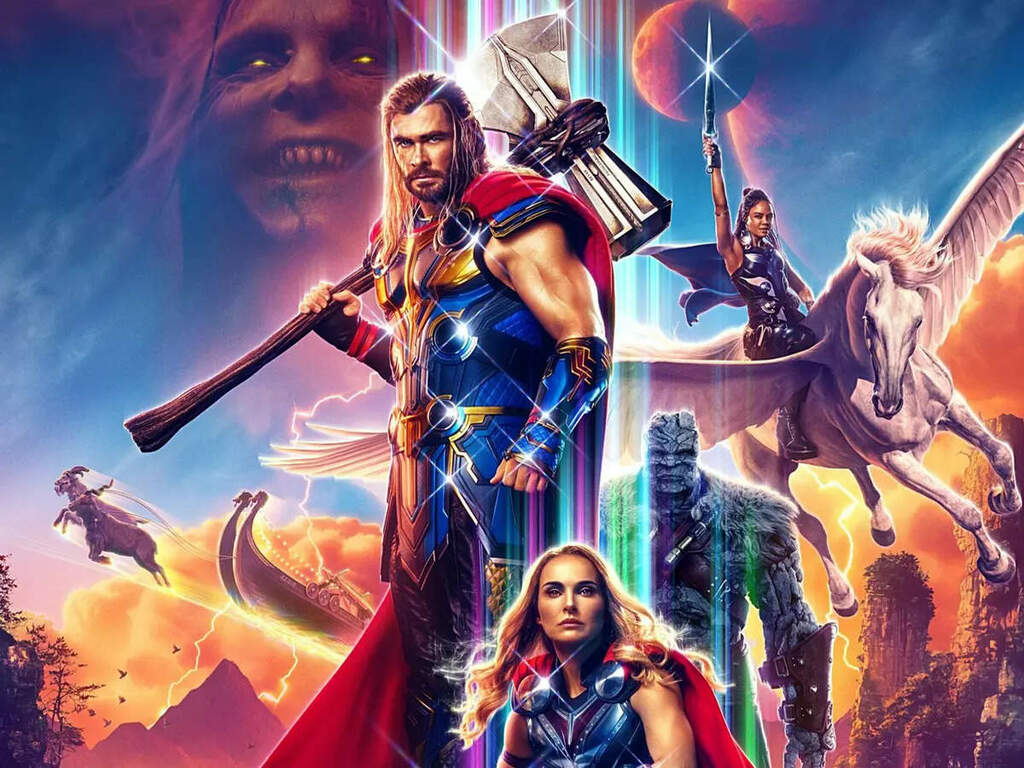 The Times of India
From analysis to the latest developments in health, read the most diverse news in one place.
Popcorn With Zenger: ‘Thor: Love And Thunder’ Is Childish And Weirdly Anti-Hero

The title character of Thor has become the worst aspect of his own movie.

Are you happy about Chris Hemsworth’s god of Thunder taking a back seat to Natalie Portman’s Mighty Thor? And where…

India Rose, 10, also made a guest appearance in ‘Thor: Love and Thunder’

Los Angeles Times
One place to find news on any topic, from hundreds of sites.
'Thor: Love and Thunder' post-credits scene could revive a dead fan-favorite

Marvel may already be laying the groundwork for one powerful reunion. Here's how the 'Thor: Love and Thunder' post-credits scene…