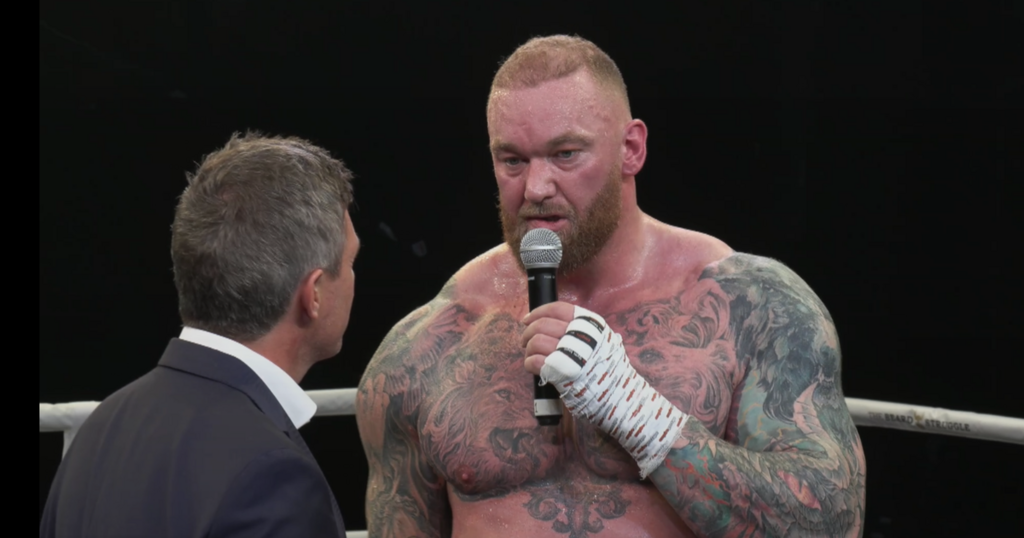 The former World's Strongest Man winner has dropped a stunning 100lbs as part of his effort to become a boxer, and faces arm wrestling champion Devon Larratt this weekend.

But despite having his next two fights already set up against Larratt and his old world's strongest man rival Eddie Hall, he is already looking to future exhibitions.

Speaking as a Reign Body Fuel ambassador, Bjornsson told Mirror Fighting that should the opportunity arise to take on the fight icons, it would be tough to turn down.

"I was asked the question if I would fight Mike Tyson," Bjornsson said. "And my answer was that I would not say no to that offer.

"This is because of the respect that I have for Mike as a fighter and as an athlete, and I would want to feel his power.

"I would want to step in the ring with him because to be able to tell people that I fought Mike Tyson would be an honour.

"I'm all about experiences, living your life and taking the right opportunities, and if I was offered to fight Mike Tyson then that would be huge for me."

But the Game of Thrones star was keen to stress that this is not a call-out of Tyson, who returned to the ring last year for an exhibition bout with Roy Jones Jr.

The fight was one of the most successful boxing pay-per-views in history, and saw 'Iron Mike' reel in the years against the smaller Jones.

But seeing him against a 6"9' behemoth like Bjornsson, with youth on his side, would be a fascinating match-up at this point in his career.

Bjornsson has also expressed an interest in one day doing a showcase fight of some description against current world heavyweight champion Tyson Fury.

"I would never say no to that, it wasn't like I was calling him out," he explained. "The same thing happened when I was asked if I would fight Tyson Fury and I said the same thing.

Would you like to see Thor Bjornsson fight Mike Tyson or Tyson Fury? Let us know in the comments section!

"I would definitely fight him if the opportunity came along, because the experience would be so great.

"I would learn so much from fighting either of those guys, so I just couldn't say no to that."

Bjornsson has already stepped into the ring with some high-level boxers for exhibition bouts in preparation for his amateur debut, although the level isn't quite that of either Tyson.

He first took on Steven Ward in an intriguing match-up that saw him pitted against a much smaller opponent.

But he was truly tested by Commonwealth Games medalist Simon Valilly in his second outing, being dropped in the third round.

But he held his own, and ultimately could find himself in the market for big exhibitions down the road.

Hafthor Bjornsson is a Reign ambassador and will fight Devon Larratt on September 18. #ReadyToReign.