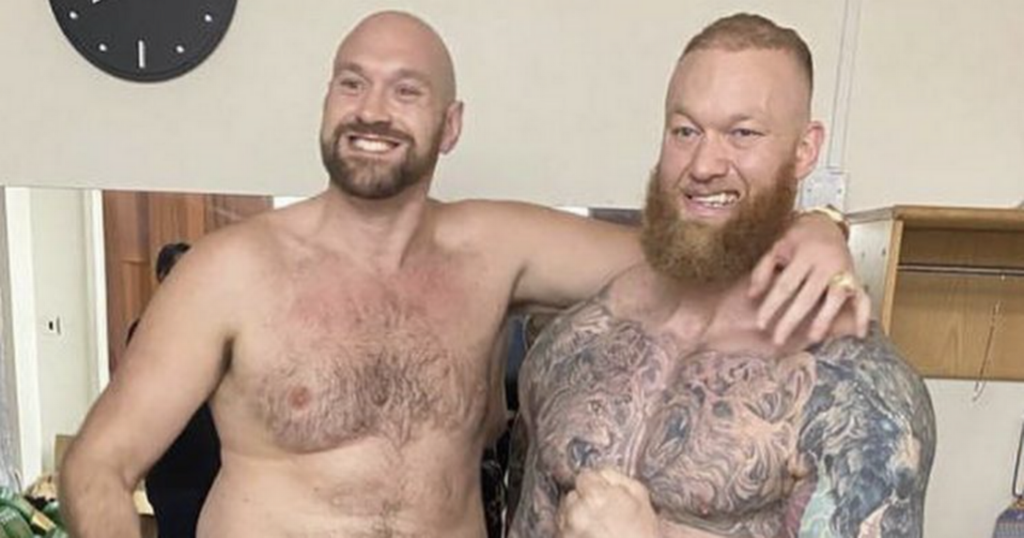 Thor Bjornsson could be set to become the newest member of Tyson Fury's training team for future fights.

The former world's strongest man has lost a whopping 120lb in his effort to pursue a boxing career, similar to what Fury did ahead of his comeback to the ring in 2018.

And the world heavyweight champion was fascinated with how Bjornsson sculptured his new slim physique, with the pair discussing joining forces for a future camp when they met in Glasgow last month.

Both men are currently working towards March fight dates, with Bjornsson set to finally face off with fellow strongman Eddie Hall, while Fury will return to the ring on March 26, likely against Dillian Whyte.

And after that, the pair may team up, according to Bjornsson, who has previously said he would be interested in a sparring session or exhibition with the two-time heavyweight champion.

"We spoke about training, nutritional life and everything basically," Bjornsson told iFL TV of his meeting with Fury.

"I like him a lot and we spoke about possibly training together, me helping him with his nutrition and him helping me with my boxing skills.

"I would love that and hopefully it's going to happen in the future."

Bjornsson and Hall have had a fight in the works since the early part of 2020, when they first announced they would be competing in the 'heaviest boxing match in history'.

The pair have had a long-standing rivalry dating back to their strongman days, and were due to settle it last September in Dubai before the Brit was forced out with an injury.

Would you like to see Thor Bjornsson join Tyson Fury's team? Let us know your thoughts in the comments section below!

But they are now both fit and ready, with a fight date and venue set to be announced shortly for the massive grudge match.

Meanwhile, Fury is set to return to action on March 26 with purse bids due on Tuesday for his fight with Whyte.

The split for the fight has been agreed at 80-20 in Fury's favour, and Whyte is still in arbitration with the WBC in relation to the finances of the bout.

But Fury's promoter Frank Warren has insisted that the champion will be fighting on that date, be it in the UK or America.