‘Thor 4’ multiverse theory brings this shocking variant into the MCU 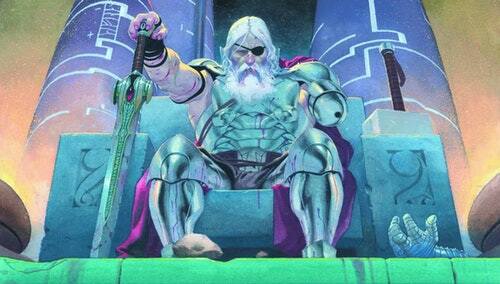 Marvel fans have leaped straight into the multiverse these past few months — and for good reason.

With upcoming films like Doctor Strange in the Multiverse of Madness and Spider-Man: No Way Home dealing with both alternate realities and variants, it’s become increasingly clear that the Marvel Cinematic Universe plans to rely heavily on multiple universes across its overall story.

Then Loki Season 1 concluded with the full-on creation of a multiverse.

Now, it seems increasingly likely that the upcoming Doctor Strange and Spider-Man sequels won’t be the only upcoming MCU titles to grapple with the multiverse. In fact, next year’s Thor: Love and Thunder seems primed to embrace all the weirdest possibilities the MCU has to offer.

Gods of Thunder — Rumors are circulating that the cast for Thor: Love and Thunder will be bigger than fans had previously been led to believe. We’re not just talking about the film’s numerous celebrity cameos, but also characters from other universes within the multiverse that, up to this point, have gone unexplored.

Fans are busy theorizing about which Thor-related variants from the comics might show up. While plenty of discussion has, understandably, revolved around the possibility of Throg appearing on the big screen, another version of the God of Thunder could very well debut in Thor: Love and Thunder.

Yes, we are talking about King Thor.

Meet King Thor — King Thor is one of several Thor variants to pop up in the comics over the years. Hailing from the Earth-14412 universe, King Thor (a.k.a. All-Father Thor) has origins that generally resemble those of the prime-reality Thor. However, the two characters’ paths begin to diverge when King Thor sacrifices his eye in a battle and becomes the All-Father of Asgard — taking his father’s place.

King Thor eventually became a disheartened and cynical ruler, following the destruction of all life on Earth by Loki. Essentially an older, battle-scarred version of the prime-reality Thor, King Thor was additionally burdened with a more tragic tenure ruling Asgard.

King Thor also crosses paths several times in the comics with Gorr the God Butcher. Their first interaction happens after Gorr travels to King Thor’s universe, conquering and enslaving all the inhabitants of Asgard as part of a campaign to destroy every god ever to exist in the multiverse. King Thor later teamed up with two other versions of himself, including the prime-reality Thor, in a battle to defeat Gorr, which they ultimately did (for a time, anyway).

King Thor’s history with Gorr is notable, considering that the comics villain appears to be the primary antagonist in next year’s Thor: Love and Thunder. There’s a chance, based on the comics, that a character like King Thor could show up and help his younger self defeat Gorr.

The Inverse Analysis — Assuming that Thor: Love and Thunder really will see Chris Hemsworth’s Thor teaming up with some of his alternate selves to defeat Gorr the God Butcher (played by Christian Bale in the film), it’s hard to imagine that King Thor wouldn’t be one of those variants.

Not only would his appearance open the door for Hemsworth to play an older version of himself, but it’d be a fun homage to some of the Gorr-centric comics that are said to have partly inspired the film’s storyline.

Plus, having Hemsworth’s Thor run into an older, cynical version of himself would be a pretty nice way to help wrap up the character’s ongoing arc in the MCU — one that has always dealt heavily with the costs of legacy and duty.